There is a scene in the cult-classic 2002 movie Roger Dodger in which Uncle Roger (played by Campbell Scott) describes his job as an advertising executive to his nephew Nick (played by Jesse Eisenberg). Paraphrasing a bit, Roger tells Nick that the first step in a successful advertising or branding campaign is to convince the audience that there is something missing in their lives. Their lives could be better -- maybe a lot better -- if only they owned the product in question.

Roger: Trust me. And when they're feeling sufficiently incomplete, you convince them your product is the only thing that can fill the void. So instead of taking steps to deal with their lives, instead of working to root out the real reason for their misery, they go out and buy a stupid-looking pair of cargo pants. (Camera pans down to reveal Nick is wearing cargo pants.)

Such is the state of the news and political climate in which we find ourselves. There is more content available for us to consume today than at any point in history. And if I'm generating content, or trying to sell something to the audience, the easiest way to do that -- at least according to Roger Dodger -- is to convince them something is wrong, either in their lives or in the world. Or both.

So, depending on what news source(s) we are choosing, we may be reinforcing our own beliefs about the trajectory of the country/world/species. Or we may be choosing to expose ourselves to alternate viewpoints in order to explore what may be inaccurate, or incomplete, about our own conclusions.

This year alone is a terrific example of how the financial media are, for the most part, acting in direct opposition to the best interests of the retail investor. Case in point, the headlines in February -- after we began the year with the worst six weeks for the major market indexes since the Great Depression -- were as ominous as you can imagine. We saw warnings that another Great Depression had already begun, and calls by televised pundits to "go to cash" (i.e., sell all your holdings).

I have friends and family members who were scared by these headlines. Some even went to cash. Do the same headline writers tell you when it's a good time to get back in?

We all know that Britain's vote in June to Brexit (leave the EU) was another black swan that didn't come to pass. There was little concern leading up to the vote because polls suggested "Bremain" was a sure thing; as such, markets were calm right up until the evening when results were tallied. The market reaction was sharply negative for two days, during which we heard calls from all the same pundits that this was going to be the start of a mass exodus of struggling EU members from their strict and punishing parental unit. Currency markets were as frantic as a polygraph machine monitoring the truthfulness of a politician's campaign promises, but after a week the market losses had reversed themselves.

I know people who went to cash during Brexit.

And the latest, though arguably most understandable, scary event that was meant to send shockwaves through the stock market -- the election of Donald Trump as our next president. I could be wrong, but I don't believe a soul was predicting a Trump win and the market response we've seen (stocks up big, bonds and rate-sensitive stocks down). 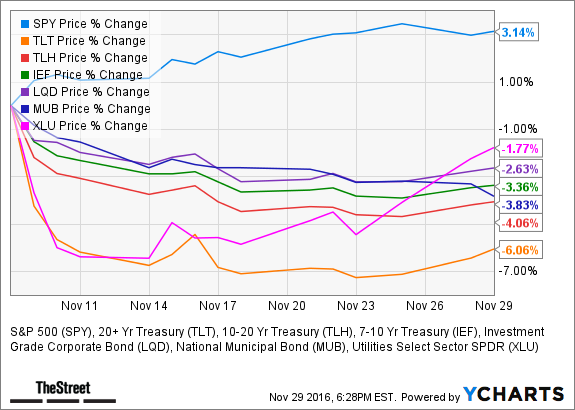 Some of the pre-election predictions (in terms of the possible market response) already look ridiculous. Here is what the big banks were saying before Nov. 8. Who could blame someone fully subscribed to this fear factory for waking up on Nov. 9 and selling out of his or her stocks and going all in on "ultra-safe" Treasury bonds?

On three separate occasions in 2016, the financial media have done their absolute best to get you out of the market -- all at the exact wrong times. Making the decision to bail on the market, or an investment strategy, during one of these periods can be devastating to one's chances of long-term financial success.

The financial media, and the media in general, are constantly trying to convince you that something is broken in the world or in your life. And that you must do something about it -- you must isolate what is broken and "fix it." After all, if there is nothing wrong and nothing needs to be fixed, then there is less incentive to read such a publication.

But you can't have it both ways, you might say...

If I am claiming the financial media are more harmful than helpful by pointing out when the markets are "in turmoil," then I must also believe their instincts are equally poor when sounding the all-clear (i.e., pointing out that we are in the early stages of a "Trump rally"). Will it be smooth sailing for stocks into the foreseeable future? I sincerely doubt that, regardless of what overnight optimism we are now hearing as a result of recent price moves.

I actually think there is a fair amount to worry about at current levels. Is it reasonable that in just three weeks the stock market has fully adjusted to the reality that interest rates are back at the top end of their two-year range?

Consider that now, for the first time this year, the yield on the 10-year Treasury exceeds that of the S&P 500. That means that for the first time in nearly a year, an investor can earn more income by investing their money risk free as opposed to relying on a basket of stocks to generate the measly 2% in dividends.

Does this make me bearish on U.S. stocks? Not necessarily. But I think some profit-taking may be prudent at these levels.

However, many opportunities have presented themselves as a result of the recent bond/rate rout. We like some high-yield municipal bond funds that have gotten substantially cheaper over the last month -- specifically, we've been buying Invesco California Value Municipal Income Trust (VCV) , Invesco Trust for Investment Grade Municipals (VGM) and VanEck Vectors High-Yield Municipal ETF (HYD) .

Get an email alert each time I write an article for Real Money. Click the "+Follow" next to my byline to this article.
TAGS: Rates and Bonds | Markets | Consumer Discretionary | Investing | ETFs | Funds | Stocks