"Although the evidence is still more anecdotal than systematic, it [the Volcker Rule] may be having a deleterious effect on market making, particularly for some less liquid issues." --Daniel Tarullo

Markets liked what they heard from Fed Chair nominee Jerome Powell at his Senate confirmation hearing yesterday. In fact, markets liked what he said very much. Since that hearing, North Korea, and progress made toward tax reform, have grabbed the lion's share of global headlines, but let's focus back in on Jerome Powell for a bit.

All Hail The Mighty Banks

Those tax reform headlines had the Russell 2000 pushing 1.5% higher in yesterday's trading. The North Korean ICBM launch got the Defense and Aerospace industry back in line with market performance, after the industry's recent wobbles. Then there are the financials -- or more specifically, the banks. This is where Jerome Powell stepped up to the plate, and hit one out of the park.

With the Dow Jones Industrials and the S&P 500 both scoring gains of close to 1% on the trading session Tuesday, the financial sector, as seen through the prism of the Financial Select Sector SPDR ETF (XLF) , screamed to a 2.6% gain by the time the closing bell at 11 Wall Street had tolled. It was even juicier for the SPDR S&P Bank ETF (KBE) . That fund ran an amazing 3.23%. Huzzah, said the crowd.

What Can You Show Me Up a Quarter?

The nominee for the Chair position at our central bank sounded supportive of the possibility that the Volcker Rule might be adjusted. For some of you new kids, that's the rule that prohibits proprietary trading by the banks. Powell also let it be known that the concept of some of the banks being "too big to fail" was not the imposing, critical factor on the current environment that the concept (or should I say "fear") had been a few years back.

Powell received push back from Senator Elizabeth Warren, the progressively liberal Senator from Massachusetts who has long been critical of both the central bank and the financial industry. Powell's quote of the day came when asked which post-crisis rules he thought should be tougher. His response: "Honestly, Senator, I think they are tough enough." Oh, yeah. Take 'em and bid 'em.

Powell indicated that he expects the economy to grow a rough 2.5% this year, and barring any surprises, he would stick to the same trajectory for monetary policy that his predecessor, Janet Yellen had embarked upon, saying: "The best way to sustain the recovery, I believe, is to continue on this path of gradual interest rate increases."

Powell also surmised that the balance sheet could end up somewhere between $2.5 trillion and $3 trillion after being whittled down over several years, and that this higher-than-what-was-once-normal balance would likely be necessary for the long term.

Investors in the banking industry, or really investors in any business that tries to make a profit through traditional lending practices, have to be keenly interested in not just the possibility of less regulation, but a central bank that is trying to push out the short end of the yield curve, while increased deficit spending created through both tax reform and a potentially aggressive 2018 budget do their best to push out the long end. A significant 2018 setup for this group is clearly taking shape.

Citing both a lack of wage growth and consumer-level inflation, Powell left himself enough wiggle room should the need for somewhat more-dovish behavior arise. At some point, it will.

Trouble on the Peninsula

The missile "went higher, frankly, than any previous shots... the bottom line is it's a continued effort to build a... ballistic missile threat that endangers world peace, regional peace, and certainly the United States." These were the words of retired Marine Corps General, now U.S. Secretary of Defense, James Mattis in response to North Korea's high altitude launch of what was most likely an intercontinental ballistic missile (ICBM) into waters off the coast of Japan in the wee hours of the night.

Though it is not clear that this missile successfully re-entered the earth's atmosphere without breaking up, it is now clear that North Korea is trying to demonstrate the ability, through the trajectory of flight, to reach Washington -- or really any East Coast U.S. city -- from a mobile launch site. That last part, the mobile part, that's important, gang. That greatly increases the level of difficulty in launch prevention.

President Trump was short in his response: "We will take care of it." What that means at this point is unknown. Cannot be known. Should not be known. What we do know, or at least what we think, is that Pyongyang is willing to come as close to nuclear war as possible without crossing that line in an effort to deter what they consider intervention by their neighbor states, as well as the United States.

Remember what I told you earlier in the year -- to stay long the defense names because the North Korean threat was not going anywhere. I am still exposed to the space, though admittedly I did take some profits.

Maybe not today, as I would likely pay a premium, but on a down day, I will look to begin re-establishing my long position in Lockheed Martin (LMT) , and perhaps buy back the shares that I sold higher when Kratos Defense (KTOS) peaked. I also am still long Raytheon (RTN) , and have never shaved that position. Boeing (BA) has gone sideways to slightly higher now for the better part of six weeks. Perhaps, if flat, initiating with a partial on anything approaching the 50-day simple moving average might be wise. 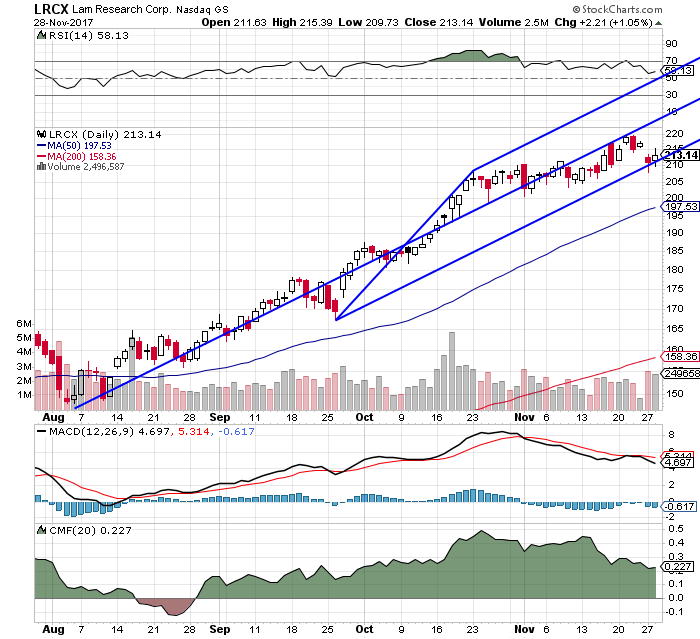 Probably my favorite stock this year, and definitely my most successful long position, has been Lam Research -- the wafer kings. In a world where the semiconductors came to rule the roost, this sort of under-the-radar name has been performing with the best of them. With significant gains at risk, and the name coming under some recent pressure, is it time to preserve capital here? As I said, I am long the name myself. The stock is still up 100% for the year. This is my actual homework. Not some fancy pants on TV with no skin in the game.

What I see here is a Moving Average Convergence Divergence that emitted a bearish crossover, albeit at an extremely bullish level at the month's start. LRCX moved sideways for two weeks in response. An attempt to cross the 12-day exponential moving average over the 26-day EMA (which would have been very bullish this far above the 9-day EMA) on Nov. 20 failed. In response, Relative Strength has softened a bit, though Money Flow remains very strong and has not really let up since August.

My Andrews' Pitchfork model is somewhat problematic. Clear to see that the lower trend line is under severe pressure and is getting a bit ragged. If you were late to this name, this level itself becomes short-term important. Now, I am playing with house money in this one. Some of you probably are also. Given that we can lose some of the edge here, and still come home with some nice dough, I probably allow this name to test the 50-day SMA of 197 before I panic, and start pulling triggers. That said, I am nowhere near considering the application of new capital here at this time. For now, I hold. It's tentative. I still think that a late-in-the-year push for performance could land this stock somewhere close to $230.

At the current last sale, the stock only trades at 14x next year's projected earnings. Not an expensive name, fundamentally. Oh by the way, Intel Corp  (INTC) , another of my long side top performers this year, is also still cheap -- and pays a 2.44% dividend yield even at these prices.

Get an email alert each time I write an article for Real Money. Click the "+Follow" next to my byline to this article.
TAGS: Transportation | Financial Services | Technology | Industrials | Economy | Newsletter | Politics | Markets | Investing | Global Equity | Regulation

Jim Cramer: Take It From a Guy Who Knows, the IPO Process Is Really Flawed

As the Robinhood debacle shows, not much has changed over the decades when it comes to initial public offerings.

Is HOOD walking into the public spotlight with a bulls-eye on its back before it gets a chance to prove itself?

I'm Raising My Target (Yet Again) on First American Financial

Shares of the provider of title insurance still don't reflect its long-term value.