This commentary originally appeared on Real Money Pro on Nov. 29. Click here to learn about this dynamic market information service for active traders.

Conventional wisdom suggests that a Federal Reserve rate hike next month is bearish for precious metals, particularly gold. This is because gold investors aren't rewarded with the interest coupon payments as Treasury holders are. Thus, the opportunity cost of owning gold is the potential cash flow of interest payments, or dividends if comparing it to equities. Accordingly, if bond and note yields are on the rise, there is less incentive to be long gold. Or so says the theory.

Nevertheless, there is another school of thought which suggests that higher interest rates generally come with higher inflation. This, of course, is supportive to the precious metals markets. In fact, there has been some data recently published by BullionVault that might even suggest that gold is moderately more likely to trade higher following interest-rate hikes.

This leaves us wondering if the gold market is setting up for a "buy the rumor, sell the fact" trade of historic proportions, or in this case, is it "sell the rumor, and buy the fact"?

Further, in light of the common assumption that gold is a hedge for uncertainty, the recent selloff appears to be somewhat misguided. Specifically, in pre-election trade gold prices were bid higher as political uncertainty clouded the financial markets. However, in the aftermath of the election gold's value has declined despite the final outcome coming with an unprecedented cloud of uncertainty.

Ironically, the markets are ignoring this policy uncertainty risk. After all, not only do we have a new administration coming to the White House but Janet Yellen's position is also on the clock. At some point, investors will want to hedge their bets and gold, as well as Treasuries, will be the probable beneficiary.

Another factor that might have contributed to the pace and magnitude of selling in gold is the looming expiration of the December futures contracts. For those unfamiliar, futures contracts, unlike stocks, come with an expiration date. As that expiration date nears, those traders wishing to continue holding their positions must exit the expiring contract (in this instance, December) and then establish a new position in the next contract month (in this case February).

One would imagine that this shouldn't have an overall impact on pricing because traders are simply swapping one gold contract for another and thus the price should be relatively stable, yet that is rarely the case. When futures contracts go into expiration, traders who are under-funded, or devoid of additional intestinal fortitude, often opt to exit the market altogether.

Many wait to exit positions until the last few trading days of the contract, which are plagued with light trading volume and abnormally motivated trading. For example, traders exiting the market to avoid contract expiration are forced into taking action; therefore, they often ignore market fundamentals, technical charting aspects, or even logic.

As those driven by the clock to exit positions discover prices moving against them, panic generally leads to a relative washout of prices. More often than not, this phenomenon is followed by a trend reversal. In this particular instance, the first notice day for December gold is Wednesday, Nov. 29. Accordingly, there is a good chance prices could stabilize now that the contract expiration sellers have taken action. 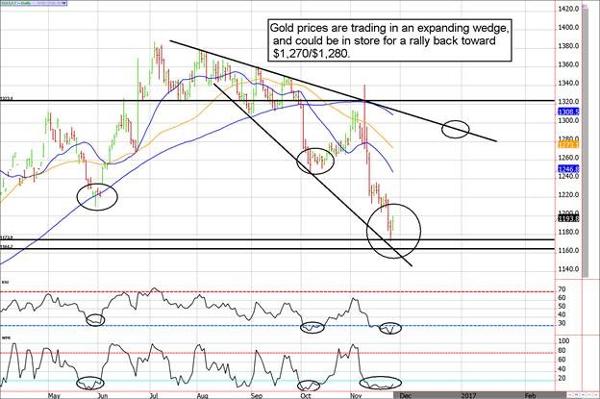 From a charting perspective, we see the potential for the bottoming process in February gold futures to be in the works. It is possible the lows are already in, but traders should always anticipate a retest of lows or moderately new lows as a market seeks footing. Thus, we can't rule out a dip back toward $1,170 or possibly even the mid-to-low $1,160s but the odds of success seem to favor the bulls from these levels.

The market has been trading in an expanding wedge, which is providing near-term support to prices. We are also seeing the RSI (Relative Strength Index) dip to 30 for the third time this year, and on the previous occasions, gold managed to rally sharply. Similarly, the Williams %R is suggesting the selling could be drying up sooner rather than later.

It is going to be a bumpy ride as the market works its way through the payroll report and the FOMC meeting, but the bulls might want to consider being on the offensive.

Get an email alert each time I write an article for Real Money. Click the "+Follow" next to my byline to this article.
TAGS: Commodities | Markets | Treasury Bonds | Rates and Bonds | Basic Materials | Investing | ETFs | Funds | Gold | Futures | Politics | How-to