Regeneron Pharmaceuticals Inc. (REGN) went from looking promising on the charts in late August and very early September to very weak and heading down for a test of the early 2017 lows now. Let's review the charts and indicators to see how the charts reversed directions and what the path ahead is.

In this daily bar chart of REGN, below, we can see how a downtrend started in September. A downtrend is a series of lower lows and lower highs. When the August rally or rebound failed in early September it made a lower high on the chart compared to the late July high. We already had a low in early July and a lower low in mid-August.

As prices moved into September we saw the slope of the 50-day moving average line turn down. We also see the start of weakness in the On-Balance-Volume (OBV) line in September. The OBV line has continued lower and tells us that sellers of REGN have been more aggressive.

By late October REGN broke below the still-rising 200-day line and in November we see a bearish death cross as the 50-day line moves below the 200-day line. In the bottom panel of this chart is the 12-day momentum study, which shows a pattern of higher lows from September to October to November. A slowing in the momentum indicator tells us that the pace of the decline is slowing. This might foreshadow a bounce or even a turnaround.

In this weekly chart of REGN, below, we can see that prices are below the cresting 40-week moving average line. Prices are back to the prior support area from $380 to $340. Declining more than halfway through a support area usually means that a stock will decline all the way through the pattern. Weakness under $360 needs to be watched closely. The weekly OBV line is pointed down and the weekly Moving Average Convergence Divergence (MACD) oscillator crossed below the zero line last month for an outright sell signal.

In this Point and Figure chart of REGN, below, we can see the downtrend and a possible downside price target in the $337-$336 area, or back to the early 2017 low. 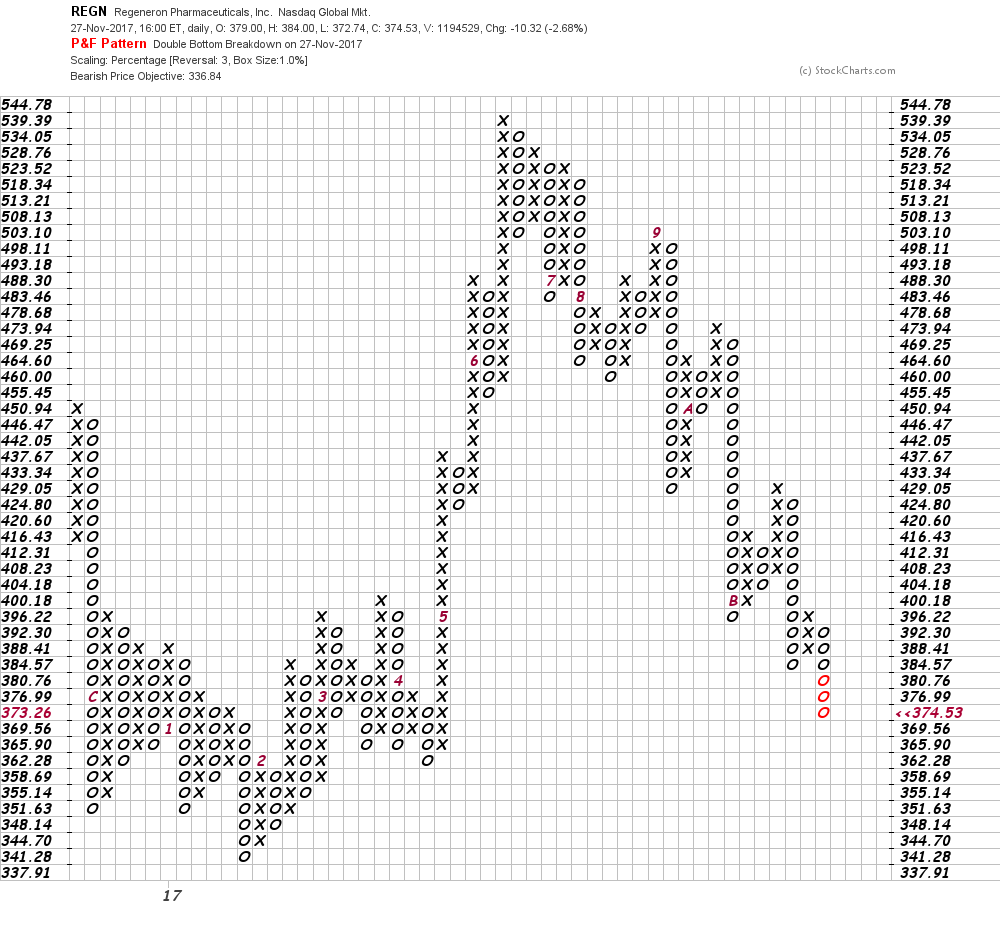 Bottom line: Regeneron is pointed down with lower price targets from our Point and Figure chart, but after a five-month decline we could see a bounce at any time. Prices in this area found buyers in late 2016 and early 2017, but the weekly OBV line was rising at that time. Traders and investors should stand aside until the situation offers a better entry.

Get an email alert each time I write an article for Real Money. Click the "+Follow" next to my byline to this article.
TAGS: Investing | U.S. Equity | Healthcare | How-to | Risk Management | Stocks

I'm Dipping a Toe in Invitae

A close above $18 would go a long way towards making breakout buyers feel better.