Dark Side of the Force

Current Fed Chair Janet Yellen has been both criticized and celebrated for publicly admitting an inability to understand the current state of consumer level inflation. The Phillips Curve had been thought of as fact in the world of academia. An obvious impact on inflation came from the post-recession gig -economy that developed a cost-conscious, part-time labor force. That labor force struggled along for years without experiencing significant wage growth in the wake of the great recession, and that experience left harmful scars on the human psyche.

There has been another factor that has forced the suppression of consumer prices on the domestic ecosystem. You know it well, in fact you have all shopped there over the past few days. It's Amazon (AMZN) . Reports of Amazon's dominance are all over the news services. Some say that while e-commerce sales were growing by a whopping 18% over the holiday weekend, Amazon itself accounted for between 45% to 50% of all online sales. Expectations for yesterday's "Cyber Monday" sales event were for the greatest shopping day in terms of dollars spent in U.S. history, with estimates that the Seattle-based retail giant may have even seen its market share grow from its torrid weekend pace.

Price. Amazon has long gone out of its way to suppress prices, drawing sales, and crushing competition along the way. Over the years, after starting out as a perceived online book store, profitability never seemed to be the firm's primary focus.

Loyalty. Of the 480 million or so products available at Amazon, 50 million (ish) products qualify for free two-day shipping for Prime members. Membership does have its privileges. This Prime membership has evolved into a cross-promotional savings vehicle that keeps customers within the firm's own ecosystem, even for entertainment such as movies, TV shows, and music, not to mention groceries via Whole Foods. At this point of the year, Prime members have spent an approximate 25% more in 2017 than they did as a group with a month to go in 2016.

Convenience. Roughly 50% of online product searches begin at Amazon. Through the first 10 months of the year, 42% of every dollar spent through e-commerce is spent at Amazon. By comparison, up-and-coming Walmart (WMT) , the only old-school retailer that has a willingness to take on Amazon -- while also enjoying the benefits of deep pockets, as well as logistical scale -- has attracted less than 2%. (Still, almost 90% of all domestic retail sales are made at a cash register, which implies a still immature online marketplace.)

Artificial Intelligence. Amazon has been building data on you for years. The firm knows what and how to promote on an individual basis. It has an idea of when to drive certain deals, and most importantly to push Prime membership. That last one is huge. That's retention. Once signed up, it's tough to go elsewhere, sort of like the way Action Alerts PLUS charity portfolio holding Apple (AAPL) is able to drive revenue through the servicing of its eco-system. The company found a way to make it tough to leave.

I am sure that you noticed the Jeff Bezos headline that ran everywhere on Monday. The man's net worth surpassed $100 billion. That's billion, with a "b"; one hundred of them. The S&P 500 is now up 16% year to date. The SPDR Retail ETF (XRT) is off a rough 6% for the year after recently rallying off its lows. AMZN, in comparison, has soared 59% in 2017. That kid from Bentonville, Arkansas? Walmart has scored a 39% gain year to date, itself. I've told you before. Amazon is dominant, but will not stand alone, at the end of the day.

Jerome Powell will take the Hill today. Late on Monday, the Federal Reserve Bank released the president's nominee for the Chair's opening statement for today's senate confirmation hearing. Same as the old boss? Yes, but no. Do not expect any overt change in policy. On this, Powell is clear: "We expect interest rates to rise somewhat further and the size of our balance sheet to gradually shrink." Powell then files his disclaimer: "However, while we endeavor to make the path of policy as predictable as possible, the future cannot be known." OK, current Fed Chair Janet Yellen might have said something very similar.

This is where it starts to get a little fun. Powell goes on: "Our financial system is without doubt far stronger and more resilient than it was a decade ago." Powell appears to be an advocate of "strong levels of capital, liquidity, stress testing, and resolution planning." He says this while also indicating that he may look for "appropriate ways to ease regulatory burdens" on that same financial system. My take on this? Maybe you want to hang on to some of your banking longs, despite the withering of the yield curve. It may be tougher to make money through traditional banking means than we expected a year ago, but easing the way business is done will reduce expenses. Then, a little deficit spending may just push out the yield curve. Now, I'm ahead of myself. Carry on, gang.

I recently initiated a new long position for my book that does not look like an imminent home run at first. Mind you, it's a trade, I am not emotionally connected. One firm that caught my eye of late has been Kimberly-Clark (KMB) . I first took a look at the name, first because it trades a forward-looking PE of only 17 times versus 19-plus for the S&P 500.

For those unaware, this is the firm behind Kleenex, Scott, Huggies, Kotex, Poise, and Depend. In other words, this is a "prime" example of a firm facing price pressures as well as margin compression due to the way Amazon does business. There is something about this firm that AMZN cannot control, though: the weak dollar.

Kimberly sells its wares in 175 countries. Nearly 25% of the world's population purchases something made by this firm every day. Of those brand names that I just mentioned, at least one is either number one, or number two in their specific category in 80 countries. Oh, and for those who have not noticed, the U.S. dollar is softening versus its peers once again.

One can easily see the way the firm bounced off its lows in early November, despite the lack of positive money flow. This suggests some exhaustion on the offer side. By the way, this lack of pressure also coincides with the downward turn made by the US Dollar Index (DXY). Our Fibonacci levels indicate to us that the stock is already approaching the 38.2% re-tracement level above $118. 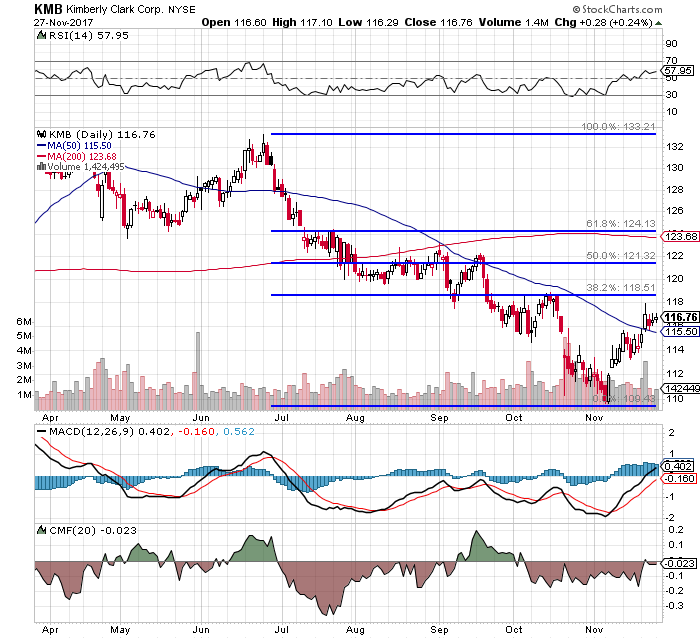 It looks to me that for the inverted head and shoulders formation to complete, this stock will have to surpass that level, and target prices somewhere between the 50% and 61.8% re-tracements. Relative strength is still quite neutral, though improving. The moving average convergence divergence (MACD) showed us a bullish crossover back in early November.

Along those lines, the 12-day exponential moving average (EMA) is now in positive territory, and, as of yet, has not given off any indication of flashing a negative fish-hook.

In my opinion, gang, you can still make $5 to $8 dollars on the long side of the equity here. You just have to simultaneously watch dollar valuations. The DXY heads back toward $95 and all bets are off.

Get an email alert each time I write an article for Real Money. Click the "+Follow" next to my byline to this article.
TAGS: Investing | U.S. Equity | Consumer Discretionary | Consumer Staples | Markets | Consumer | Economy | How-to | E-Commerce | Risk Management | Stocks