We've been trying to leverage what we're convinced will be a substantial OPEC accord on Wednesday, Nov. 30, and spent the last several columns outlining why we'll see at least a six-month agreement to knock more than a million barrels a day of OPEC production off the market.

Especially with the current pessimism of an agreement, we have a unique opportunity to play some stocks for the coming week. In past columns, I've tried to point people towards Permian shale players, who've been on fire for the second half of 2016: Cimarex Energy (XEC) , Concho Resources (CXO) and Pioneer Natural Resources (PXD) , for example.

But many of these have become almost too well regarded, leaving some others in the oil space as perhaps more interesting mid-term plays for the coming meeting and beyond. Let me suggest two names to you: Oasis Petroleum (OAS) , a leveraged Bakken oil company, and Noble Energy (NBL) , an underestimated player who will benefit from their assets in the Niobrara shale.

These two names couldn't be less like one another, but together they make a nice pair of oil companies to play. Let's start with Oasis, one that I once included on my "walking dead" list of oil companies, convinced they wouldn't make it out of the crude bust cycle without a restructuring.

Oasis was one of several over-leveraged shale players to concentrate on increasing efficiencies and centering on prime acreage throughout 2016, while also successfully completing a refinancing secondary on Oct. 18 for a cash infusion of over half a billion dollars. This cash has easily covered the company's debt flow problems for now, while also helping to finance their acquisition of the bankrupted SM energy Bakken acreage. 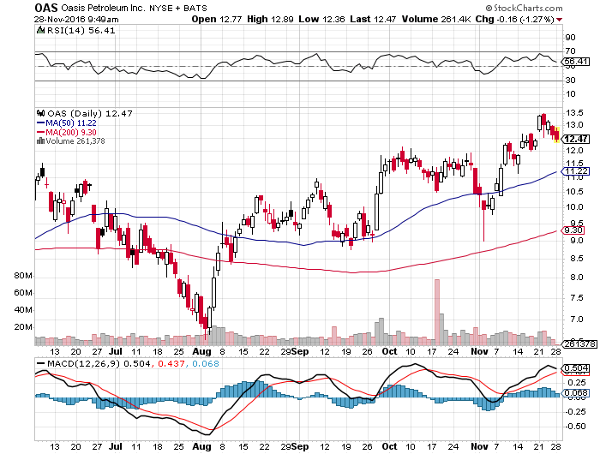 Is it completely in the clear? Nah. But market action is betting heavily on its survival, and if crude does continue to rally towards $60, it is cheap and will continue to trade well. A completely speculative, but worthwhile play going into Wednesday.

Next, Noble. Oil interest almost exclusively centers currently on the Permian and forgets about the DJ basin and Niobrara. It is here that Noble Energy has its strongest shale position, with four times the acreage of its holdings in Texas and twice the daily production. Much of the focus for Noble's share price has centered around its partnership in the Israeli offshore Leviathan Natural gas play -- but as that opportunity has stabilized, the time has come to refocus on its onshore shale. 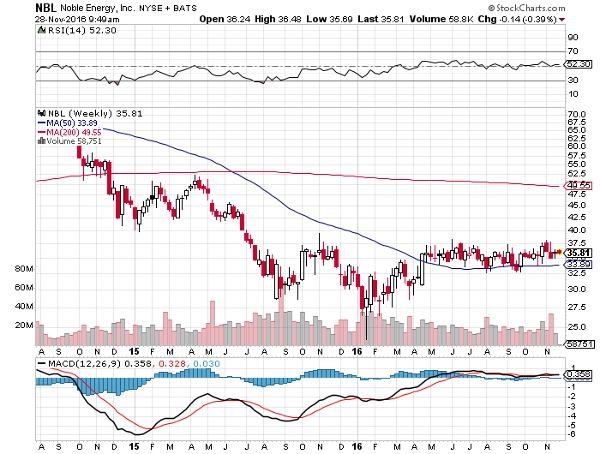 That focus on Mideast offshore gas, among other distractions, has caused Noble shares to trade flatly throughout 2016, which smells to me like a breakout pattern. I think this OPEC meeting could be the impetus to finally ignite shares higher.

Noble strikes me as one of the few large-cap U.S. independents that has yet to benefit from the expectation of higher oil prices. A good match for Oasis.

Together, these two would make a fine start to a mid-term oil portfolio going into the OPEC meetings on Wednesday, particularly if you're betting on a substantial production cut agreement.

My first ENERGY WORD webinar is TODAY! Still time to register and take advantage of this FREE preview! Click here for more information.

Get an email alert each time I write an article for Real Money. Click the "+Follow" next to my byline to this article.
TAGS: Investing | U.S. Equity | Regulation | Markets | Energy | Economy | Stocks