Accenture  (ACN) looks poised for a strong upside move following a seven-month consolidation pattern. Based on our analysis of the On-Balance-Volume (OBV) line, it looks like investors have been accumulating long positions in ACN since February. Long periods of accumulation or aggressive buying typically result in sustained upside moves. Let's look a bit closer.

In this 12-month daily chart of ACN, below, we can see a quick January-March turnaround but from April the price pattern turns neutral with prices mostly trading between $110 or so on the downside and around $120 plus on the upside. In late September a jump to $125 is quickly rejected. The shorter 50-day simple moving average line swings up and down around prices, which often happens with moving averages and sideways trading ranges. The slower-to-react 200-day moving average line has a positive slope the whole year and tests of the line in September turned out to be a buying opportunity. Currently the 50-day and the 200-day averages are pointed up.

The performance of the On-Balance-Volume (OBV) is the most bullish clue on this chart. Despite several price dips during the past seven months, the OBV line continues to march higher. The OBV line rises when the volume of trading is heavier on days when ACN closes higher. More volume on an "up day" is a sign that buyers are being aggressive. Buying on a "down day" means you are a patient buyer and market watchers can miss that more subtle accumulation.

Our favorite leading indicator -- price momentum -- is not giving any bullish nor bearish clues at this time.

Similar to our bullish looking daily chart, this three-year weekly chart of ACN, below, is also very positive. Prices are above the rising 40-week moving average line. The weekly OBV line has been rising since the fourth quarter of 2014 and signals a long period of accumulation and aggressive buying.

In the lower panel is the Moving Average Convergence Divergence (MACD) oscillator which is generating a new go long signal.

Point and Figure charting, below, has been around in the U.S. since the 1880s. This technique only looks at price changes and ignores volume and time. It is believed that Charles Henry Dow used this method when he followed the stock market and worked for a while on the floor of the NYSE. The approach was labor intensive but software improvements have increased its popularity in recent years. 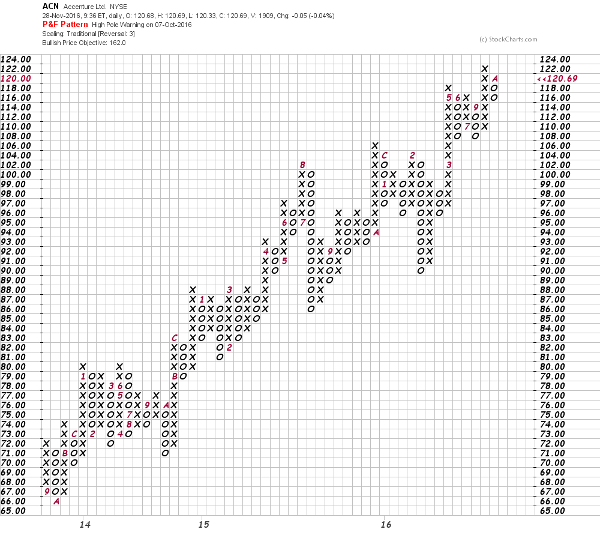 This Point and Figure chart shows a multi-year uptrend and a longer-term price target of $162. Our first price target using our daily bar chart is the $130 area -- taking the height of the consolidation ($10) and adding to the anticipated breakout above $121. A close back below $115 would turn the chart neutral.