Align Technology  (ALGN) has had a very impressive rally so far this year. However, after examining our charts and indicators this morning, we believe that the upside is not over and you should be ready to capitalize on new all-time highs.

In this 12-month daily chart of ALGN, below, you can see a small double-bottom pattern in January and February. The size of the bottom pattern does not give us a proper reading on the subsequent rally. Prices took off in late February and haven't looked back. Dips in April and June to the rising 50-day simple moving average line turned out to be buying opportunities along the way. The slower to react 200-day average line has maintained a positive slope all year.

The daily On-Balance-Volume (OBV) has risen along with the price action, which is the kind of confirmation that chart-followers like to see. Notice how the OBV line has recently made a new high, with prices making new highs? This is a sign of aggressive buying. Another feature of the OBV line is that it only went sideways in August, September and October as ALGN corrected. No negative divergence here.

In the bottom panel is the trend-following Moving Average Convergence Divergence (MACD) oscillator, which signaled both a cover shorts buy signal and an outright go long signal this month.

In this three-year weekly chart of ALGN, below, we can see a roughly two-year consolidation/base pattern across the $55 level. Stocks often make doubles or triples from base levels so this consolidation could support a rally to the $110 area (two times $55). ALGN is above the rising 40-week moving average line and its recent pullback stopped short of that curving trend line.

The weekly OBV line in the middle panel shows a steady rise from early 2014, suggesting many months of accumulation.

In the lower panel is the weekly MACD oscillator which has been in a bullish set-up since October 2015. The two moving averages that make up the indicator have begun to narrow toward a new buy signal.

We can already justify a price target of $110 for ALGN, but this Point and Figure chart, below, yields a longer-term price objective of $118. Longs could raise their sell-stops to a close below $90. 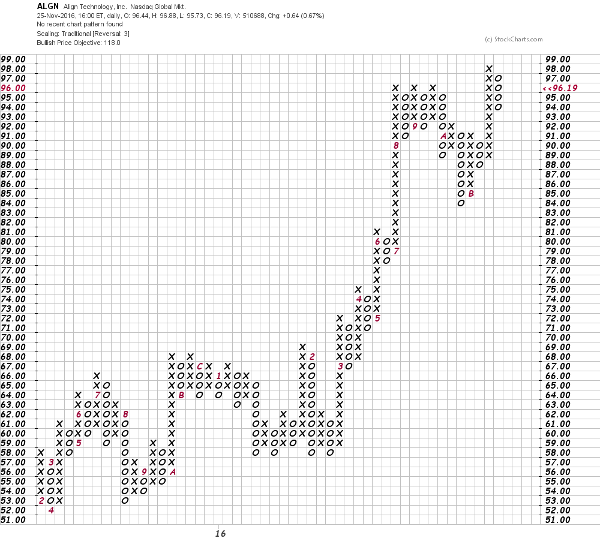