We last reviewed Action Alerts PLUS holding General Electric (GE) in the middle of November, and prices have stabilized a little. Back on Nov. 14, we said, "The volume of trading in GE is heavy and that can be a sign that some traders and investors are throwing in the towel. That can sometimes signal a climax low is being seen, but it is too early to tell. The $17.75 and $17 levels are likely to be key to GE's intermediate-term future."

With the announcement that Nvidia (NVDA)  -- also an Action Alerts PLUS holding -- and GE will be extending their 10-year partnership by bringing artificial intelligence tools to medical imaging, another look at the charts and indicators on GE seems to be in order.

In this daily bar chart of GE, above, we can see a little light at the end of the tunnel. Prices are still well below the declining 50-day and 200-day moving average lines, but notice the heavy turnover in the middle of the month -- 300 million shares of volume could be considered a "throw in the towel" event. Prices have not rebounded much, but the 12-day momentum study shows a bullish divergence with a higher low in the second half of this month compared to a lower low in price. This bullish divergence is not big but it appears to be working for now.

In this weekly bar chart of GE, above, we can see a steep decline from $30 in April down to $18 this month. This is not a classic 50% retracement, but not all declines pay attention to percentages. Prices are below the declining 40-week moving average line -- maybe too far below. The weekly OBV line remains in a downtrend and the weekly Moving Average Convergence Divergence (MACD) oscillator is still in a bearish mode. 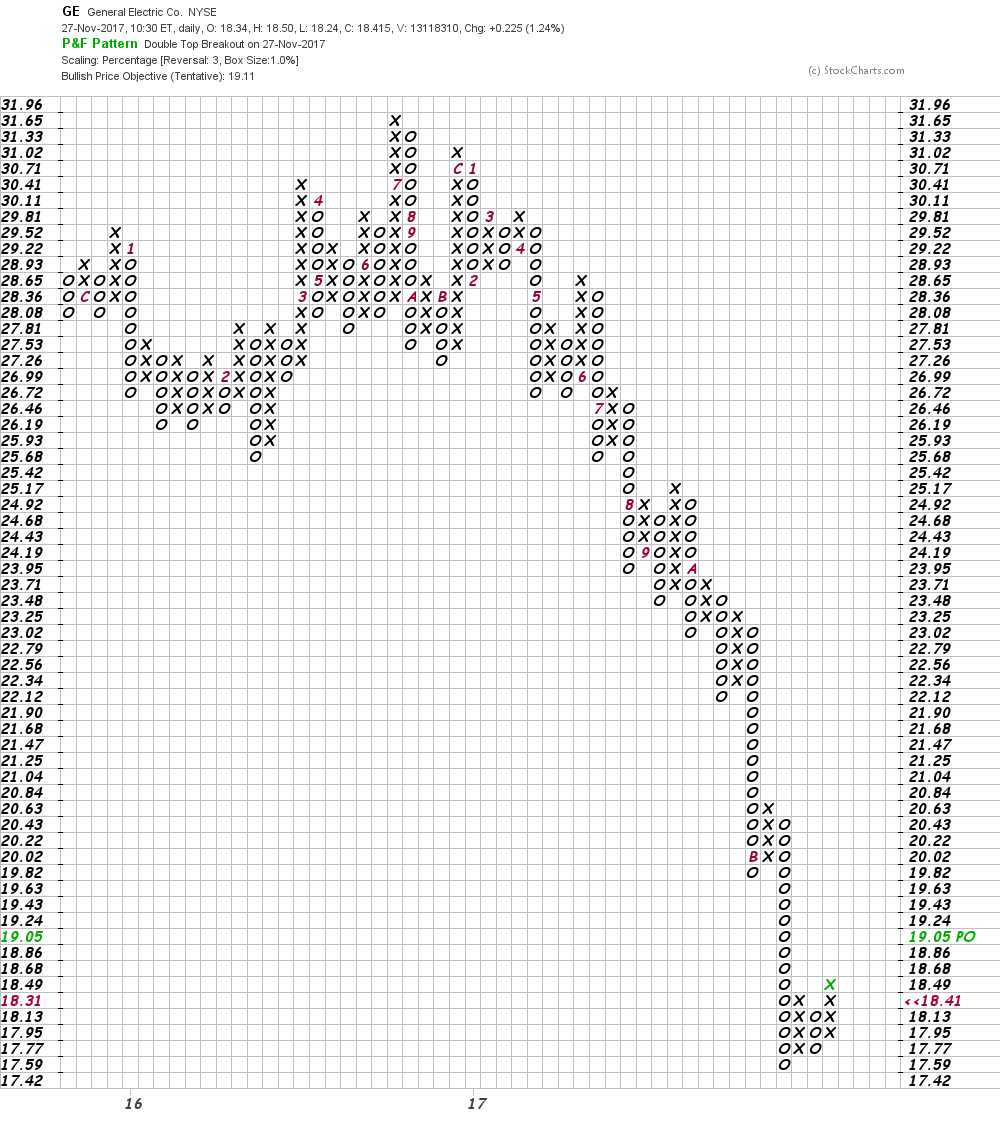 This updated Point and Figure chart of GE, above, shows a small breakout from a small double top at $18.31. A nearby price target of $19.05 is projected.

Bottom line: A few weeks ago, the price action was a remake of Chicken Little, but now there is a glimmer of hope for General Electric.

Get an email alert each time I write an article for Real Money. Click the "+Follow" next to my byline to this article.
TAGS: Investing | U.S. Equity | Healthcare | Industrials | Basic Materials | Stocks