Getting a great deal at a retailer on the day after Thanksgiving is an American tradition.

This year it might pay, instead, to get a real deal on Simon Property Group (SPG) , the owner of some of this country's top class 'A' malls.

SPG is a well managed operation. The firm garners excellent grades across all corporate metrics yet sells at a bargin price right now.

Simon's current discount appears unwarranted. The most recent decade was a tough climate for retail. The stock market crashed in 2008, triggering the Great Recession, which was the worst of its kind in our generation.

Despite that poor macro-economic environment, from 2007 through 2017, SPG was able to grow funds from operations (FFO) by 111% and dividends by a similar amount. Continuous shareholders made decent total returns on this low-beta, relatively high-yielding and conservative name. 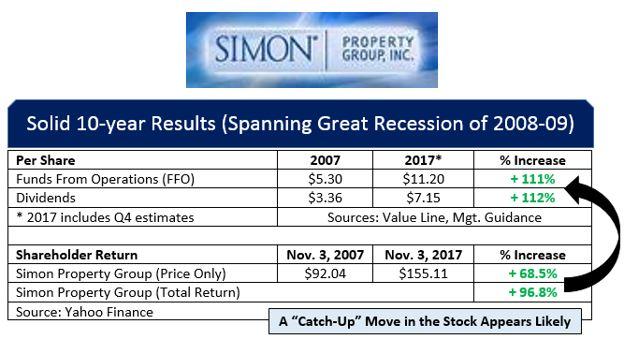 The approximately 15% gap between SPG's 10-year total return and the company's true value creation suggests a "catch-up" move is very possible. A normalized mood regarding retail REITs (real estate investment trusts) could add quite a bit to future returns.

Over the previous seven years SPG carried an average price-to-FFO ratio (similar to a P/E ratio for non-REITs) of 18.4x accompanied by about a 3.01% yield. As of Nov. 3, 2017, SPG was available for only 13.8x this year's FFO estimate. After its second dividend increase of 2017 SPG now sports a historically generous current yield of 4.6%.

Today's valuation looks as good, or better, than it did at the stock's last seven "best buying opportunities" (green-starred below). 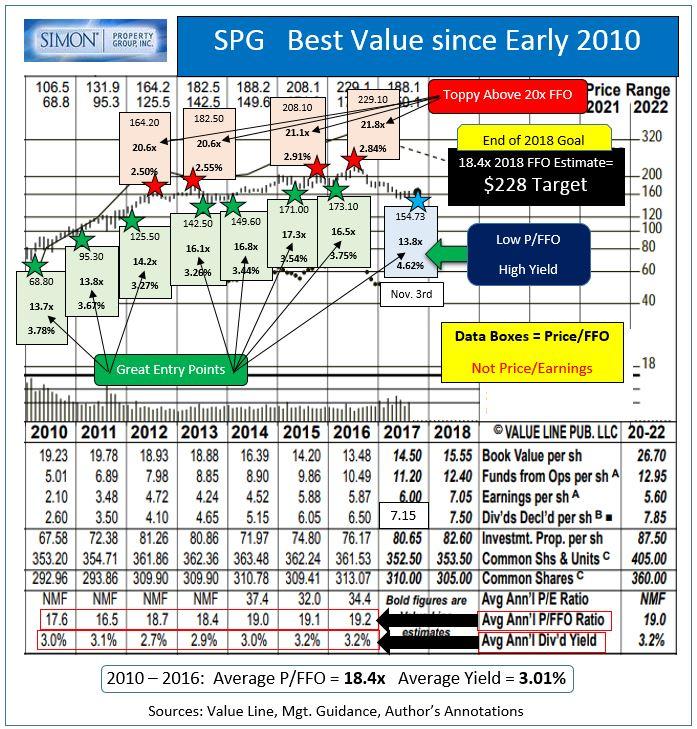 SPG's four "should have sold" moments (red-starred) occurred only when enthusiasm ran too high, with P/FFO multiples elevated to the 20x - 21x range.

What is Simon Property really worth? A simple regression to the mean valuation of 18.4x next year's FFO projection supports a 12- to 16-month price target of about $228. That's not a crazy idea. SPG topped out at $229 in 2016 when book value, FFO and dividends were lower than they are currently.

The stock's poor chart action and investors' distaste toward this group have led many analysts to take more conservative stances on SPG's near-term prospects.

CFRA carries a 4-STARS, out of 5, Buy ranking on Simon Property but only projects $180 as its 12-month goal. That modest assumption would still generate over 20% in total return from last week's quote near $155. If my whole portfolio achieved that every year I wouldn't have cause for complaint. 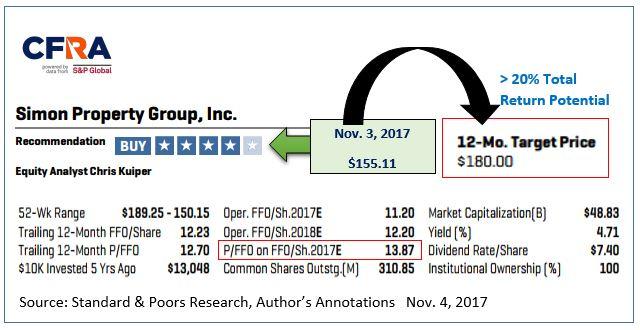 Independent analysis from Morningstar came to a similar, but slightly more bullish, conclusion. The firm recently called SPG's present day fair value as $191, about 23% above the stock's Nov. 3 quote.

Note, too, that Morningstar's assumption implies only a 16x P/FFO. That is lower than SPG's absolute low P/FFOs during all four years from 2013 through 2016. That $191 target is far from an upper limit. 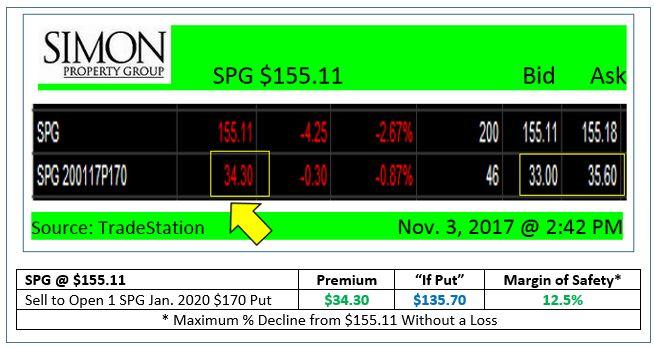 Maximum profit would be keeping 100% of the money received upfront without having to buy the shares at all. In this example, that would be $3,430 per 100-share commitment. In the worst-case, forced purchase price drops all the way down to $135.70. That's a 12.5% extra margin of safety from below what appears to be an already cheap price.

Future stock market action can never be guaranteed. I can say for sure, however, that owning Simon Property Group below $136 would have been a winning positon 100% of the time since before the start of 2014. 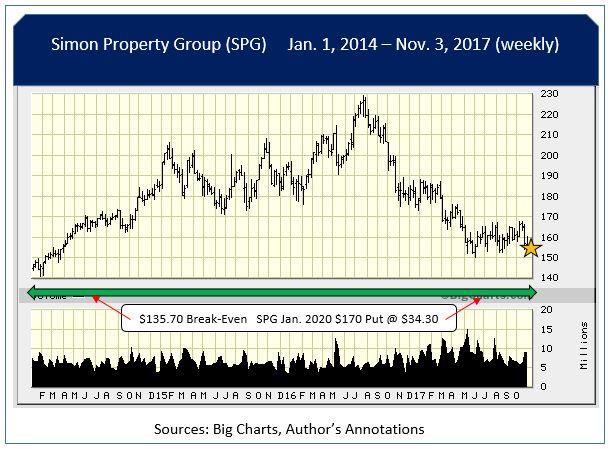 Ignore the "doom and gloom" crowd. Simon Property's results have never been better yet its shares reflect pending disaster. We can't know if CFRA's, Morningstar's or our own projection will be more on the mark. Achieving any of the three would provide outstanding total return in a market that offers few bargains. 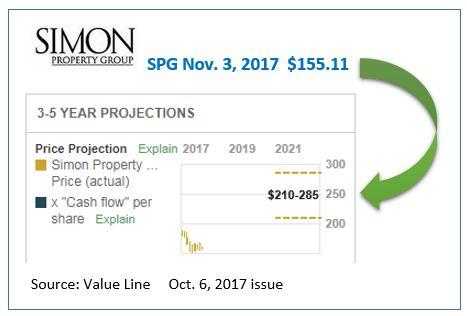 Buy some shares, sell some puts, or consider doing both.

-- This Article was originally published on Nov. 7.

Check out all of Real Money's Black Friday Stock Picks:

Paul Price is a regular contributor to Real Money Pro. Click here to learn about this dynamic market information service for active traders.

Get an email alert each time I write an article for Real Money. Click the "+Follow" next to my byline to this article.
TAGS: Investing | U.S. Equity | Consumer Discretionary | Real Estate | Financial Services | How-to