It was almost a year ago that we reviewed the charts and indicators of Align Technology, Inc. (ALGN) , and we wrote then that "we can already justify a price target of $110 for ALGN, but this Point and Figure chart yields a longer-term price objective of $118. Longs could raise their sell stops to a close below $90." One year later, we can see that prices passed both our $110 price target and the $118 target and went on to more than double from there. ALGN is up more than four-fold from its 2015 base pattern. Very impressive. Did I say impressive?

It's time for that annual check up, so let's have a look at the charts and indicators of ALGN and see what new targets and risk points should be suggested.

In this updated daily bar chart of ALGN, below, we can see that prices are in a strong and durable uptrend, with sideways-to-higher corrections along the way. There is an upside gap with volume at the beginning of May and a gap in late October with less volume. Prices are above the rising 50-day moving average line as well as the rising 200-day line. ALGN is probably too far above the 200-day line -- or as some like to say, it has gotten ahead of itself.

The daily On-Balance-Volume (OBV) line has been rising over the past twelve months and tells us that buyers of ALGN have been more aggressive. The trend-following Moving Average Convergence Divergence (MACD) oscillator has been above the zero line since the middle of February, which is bullish, but recently the two moving averages that make up this indicator have crossed to the downside for a take-profits sell signal.

In this weekly chart of ALGN, below, we can see the hugely profitable rally over the past two years. Prices are still above the rising 40-week moving average line. The weekly OBV line is in new high ground and confirms the advance. The weekly MACD oscillator is in a bullish mode, even though the daily MACD oscillator shows weakness.

In this Point and Figure chart of ALGN, below, we can see the long uptrend of this stock. There is a potential upside price target shown -- $289 -- and prices could reach that level after some sideways consolidation. 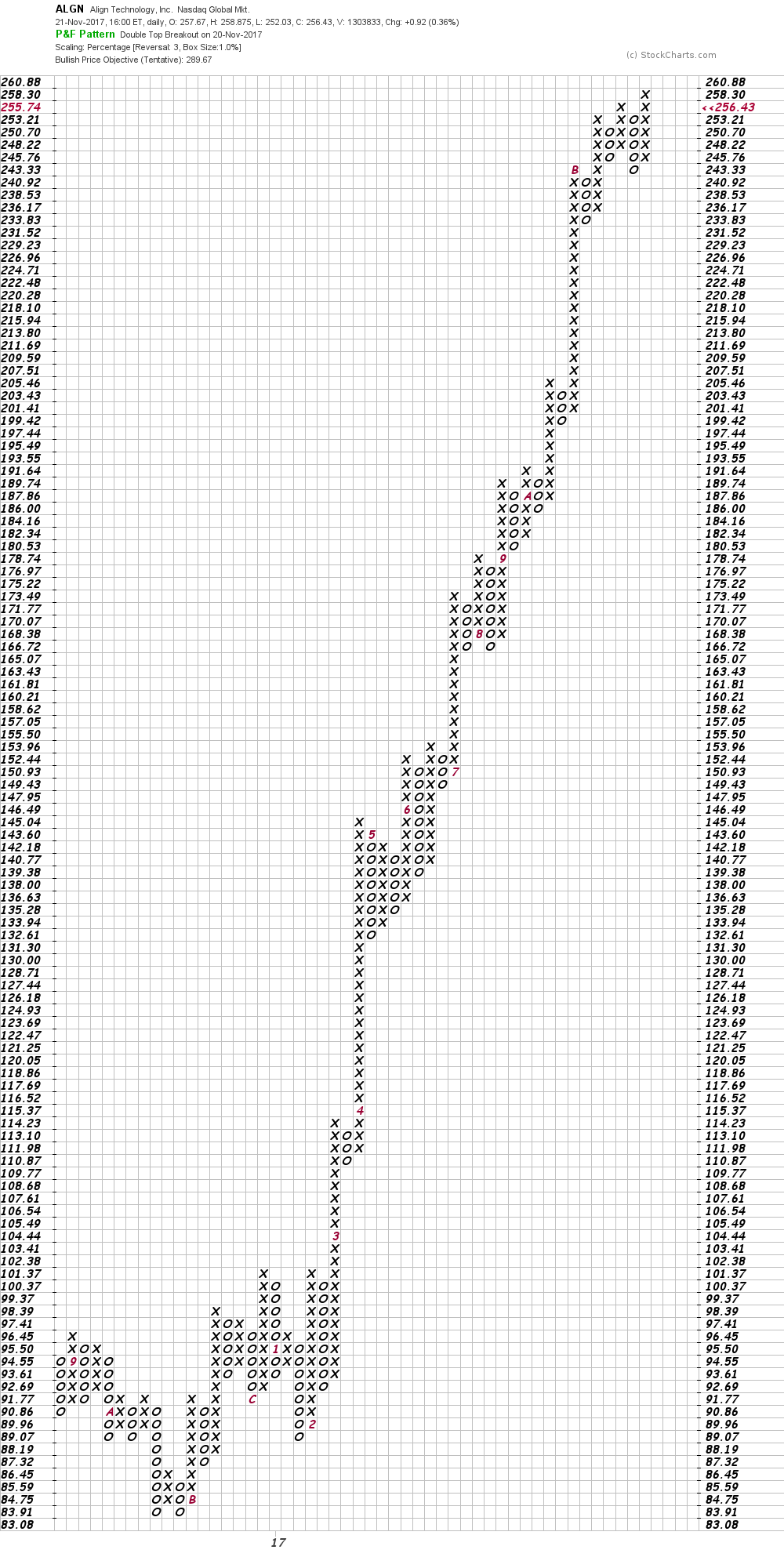 Bottom line: The price of ALGN is extended when compared to our favorite moving averages. The pace of the rally has slowed this month and a daily MACD oscillator crossover has been generated. These clues are not sell signals, but they are a "heads up." Traders and investors should consider raising sell-stop protection to a close below $220. A period of sideways price action would be welcomed and we still have a $289 price target to shoot for.