Urban Outfitters Inc. (URBN) has had a nice run from its June low and it could continue to rally, but the gains may be harder to achieve, with resistance looming above $32. Let's review all the charts and indicators to show you what I mean.

In this daily chart of URBN, below, we can see that the price of Urban Outfitters has turned higher, but only from out of a small two-to-three-month base, or consolidation pattern, around $18. Prices broke out of their downtrend in August, with heavy volume and a gap above the 50-day moving average line. Prices continued to rally but volume was not impressive, however, the On-Balance-Volume (OBV) line did rally and has confirmed the uptrend.

The trend-following Moving Average Convergence Divergence (MACD) oscillator moved above the zero line in August for an outright go-long signal. In October, we can see a belated (i.e. well off the bottom) bullish golden cross, as the 50-day average crossed above the 200-day line.

In this weekly chart of URBN, below, we can see that the price action over the past three years is in a downtrend. Prices have turned up above the flat 40-week moving average line. The weekly OBV line has improved in the past four months, but it was preceded by more than two years of weakness and liquidation. The weekly MACD oscillator recently turned above the zero line for an outright go-long signal.

In this Point and Figure chart of URBN, below, we can see the base and the rally. A $28.57 price target has been reached. That does not mean that prices cannot go higher, but it is more likely that we see some sideways consolidation before that happens. 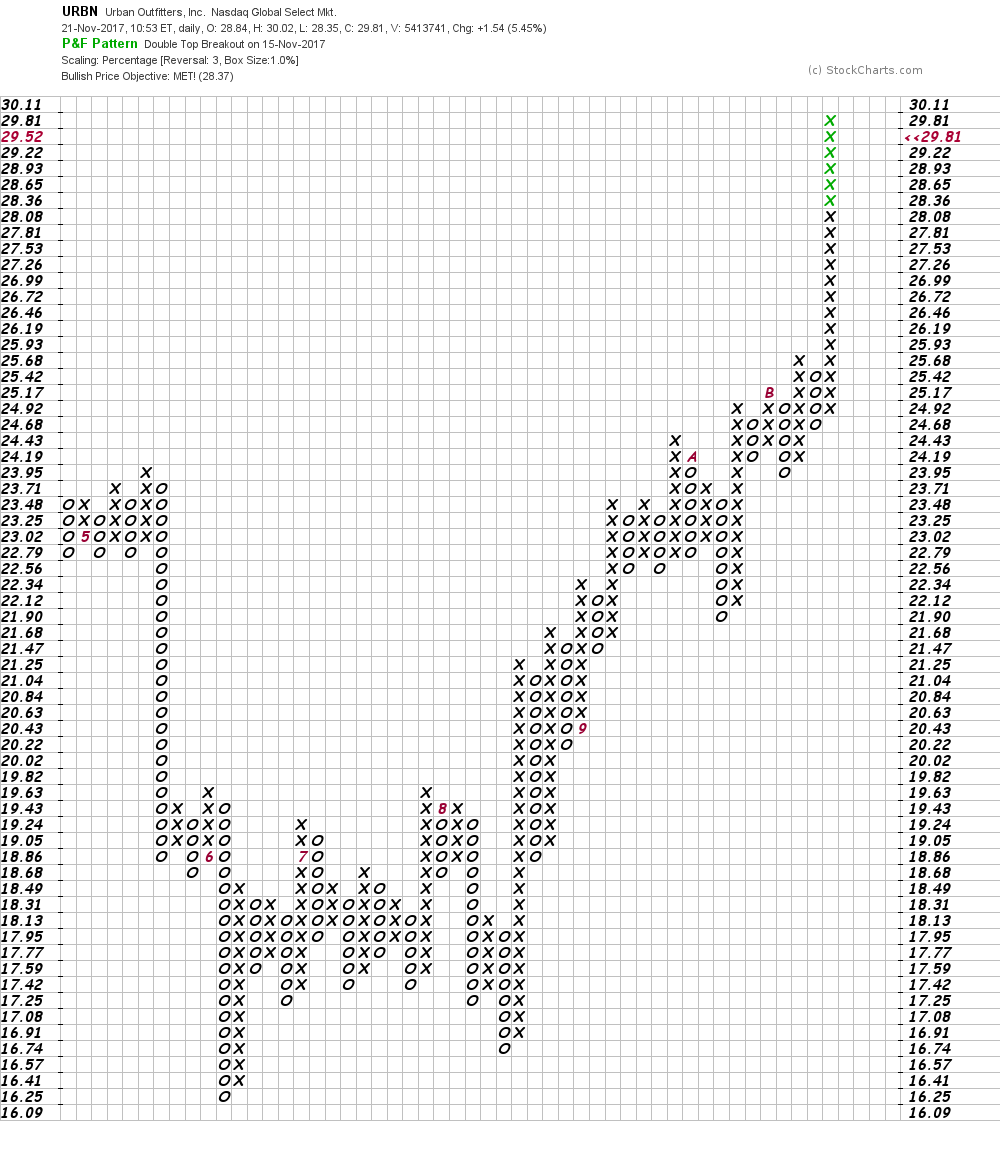 Bottom line: The rally in URBN has been significant in a relatively short period of time. The weekly chart shows possible resistance beginning around $32 and extending up to $40. What does that mean? Basically I would not chase this rally if I wanted to go long URBN. I would wait for a pullback closer to $26 before probing the long side and I would risk a close below $22.

Get an email alert each time I write an article for Real Money. Click the "+Follow" next to my byline to this article.
TAGS: Investing | U.S. Equity | Consumer Discretionary | Stocks | E-Commerce