Who can't appreciate the irony of the Department of Justice protecting companies like Netflix, Inc (NFLX) and Amazon.com Inc (AMZN) in the name of the consumer? We're from the government, we're here to help.

As the mess between the DOJ and AT&T, Inc (T) Time Warner Inc (TWX) deepens, arguments from both camps have emerged. The DOJ is worried about pricing and competition. A merger between AT&T and Time Warner will slow online video adoption and maturation, while the consumer will be hurt by pricing.

If your initial reaction was, "Wait. What?" then you are not alone. Whether you try and make the argument from content to number of providers, it simply falls flat for me. Netflix, Amazon, and even Hulu are rolling out plenty of their own content and we've watched the price of a Netflix subscription creep higher. Disney (DIS) is planning its own online service and the biggest issue for cord cutting has been the lack of local channels. The logic falls flat.

There is no lack of competition for online content. As far as slowing video adoption, neither Netflix nor Amazon is going to allow that to happen as they continue to snatch up consumers and race to remain at the forefront of technology.

I don't enjoy politics. Rarely will I discuss politics. There is no winning. But to me, this comes down to CNN -- and the political statements that the network makes.

And I'm no lawyer, so my aforementioned views are mine and mine alone, but I see no reason to be a seller of AT&T on the DOJ news alone. The negative will be the costs associated with a legal battle, which I ultimately believe would result in the merger being approved. Or they simply drop CNN to proceed quickly. I find the gem in the deal is the HBO/DirectTV portion of Time Warner, rather than CNN.

I actually think both names are buys right here, right now. Often, I'd prefer to sell puts on something like T, but the implied volatility really offers nothing of "value." The front months are trading in line with historic volatility, so there appears to be nothing overpriced. 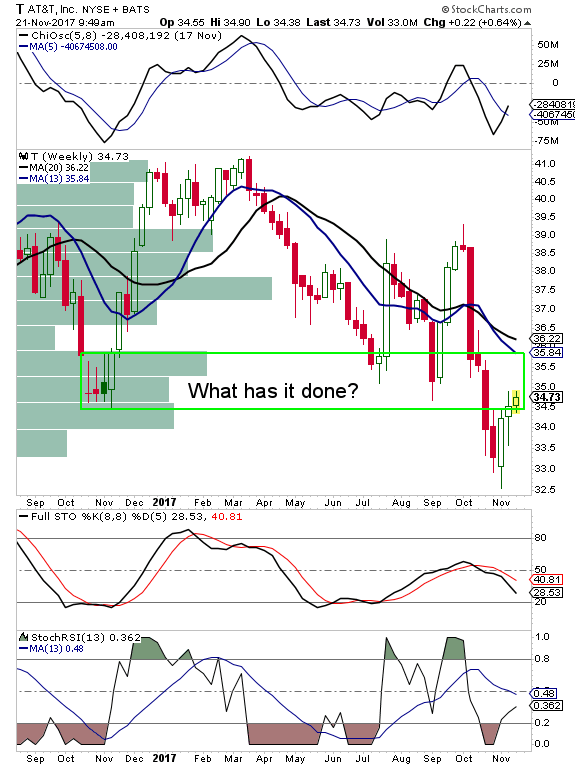 I expect shares to get called on Jan. 5 if T is trading over $35, so there is a chance a trader would miss the $0.49 dividend, but they would catch $0.40 in price appreciation and hold the trade for two weeks less. It would actually provide for a higher (29%) annualized rate of return.

The bigger concern for me is the Sprint Corp (S) marriage with T-Mobile US Inc (TMUS) falling apart. It will continue to weigh on the mobile carrier side of the business. That's most evident in the weekly chart on T (see above). For those worried about the possible merger with TWX falling apart and what it will do to shares, glance back to October 2016, when this all came to light.

T has done absolutely nothing in terms of net change over the year, while the market has rocketed higher. In fact, we're below where we traded in 2016. T did trade from $35 to $41 after the proposed deal was announced, so it is very possible perceived approval will send us toward $38 and a closing will send us back to the $40-$41.

The market appears to have priced in deal failure and no longer gives either T any pre-deal value or TWX much value, when the latter will probably be hunted by another player if T isn't a successful buyer.

DISH Network Corp (DISH) is one to watch, as the media plus cable hookup carries forward. The stock appears technically better above $5,1 and you could have TMUS move in after Sprint's tie-up with Altice USA Inc (ATUS) and T's engagement to TWX.

While there's a lot going on here and a lot at stake, the DOJ is the least of my concerns and carries no impact on my views of T, TWX, or media in general. The race to stream is in high gear, with Netflix still clearly in the lead, Amazon gaining some ground and the rest of the traditional cable names and content providers playing catch-up. The T-TWX and S-ATUS agreements won't be the last tie-ups between cable and telecom, and I suspect we'll see media/content names continue deeper into the fray here. The DOJ may be busy over the next two or three years chasing its tail, as technology and consumers change in non-traditional ways.

Get an email alert each time I write an article for Real Money. Click the "+Follow" next to my byline to this article.
TAGS: Investing | U.S. Equity | Regulation | Markets | Technology | Telecom Services | Mergers and Acquisitions | Options | Politics | Risk Management