My first interactive energy webinar is about to be scheduled. Don't be caught without this key information heading into the OPEC meeting! Send an email to info@energyword.com for more information on how to join.

As we near the Nov. 30 OPEC meeting, more and more clues are becoming clear that I was right: There will be a production agreement this time around in Vienna, as opposed to the other four OPEC meetings that amounted to nothing since oil began to fall in late 2014.

I was also right in pointing out the best places to take a risk on this meeting succeeding is the advantage of U.S. oil companies -- with the hottest Permian players that have become a bedrock of our exploration and production (E+P) investments for the last year and a half. In several columns, I mentioned Anadarko Petroleum (APC) , Cimarex Energy (XEC) and Concho Resources (CXO) as great proxies for a deal. All three are screaming higher today.

But not everyone is comfortable with taking high risk on these E+Ps, knowing that a misfire in Vienna (which has more often than not been the outcome) will decimate these stocks overnight, and not everyone is convinced that even a small measure of compliance with any deal can be assured.

For these "conservatives," I do have a play: Buying option straddles or even the VIX on crude oil. Both will react massively well if no agreement is reached, while not being impacted much if an agreement is signed.

We've seen an increase in the open interest -- the number of outstanding contracts -- of crude oil futures, now above 2 million contracts for the first time ever: 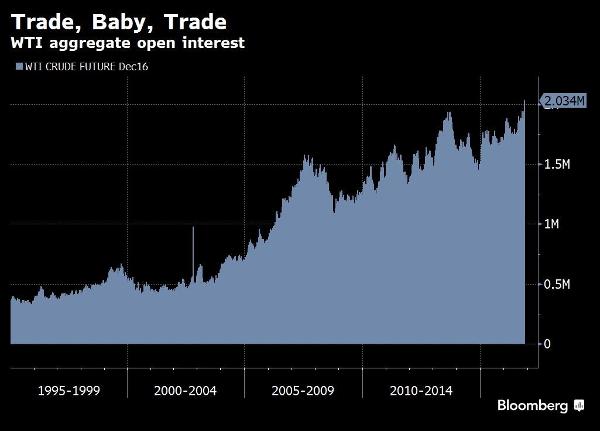 There continues to be heightened interest in adding crude oil to every portfolio, as I've outlined in both of my books, and the advent and domination of algorithmic programs has done little to slow the speed of its growth. But the recent move above 2 million contracts is from something different -- the increase of options positions. Remember that options, at least among professional options traders, never or rarely, exist alone. They are almost always tied to other options as hedges or to underlying futures contracts in delta hedges. This particular big rise in futures interest is almost surely connected to options interest of the upcoming OPEC meeting.

It makes sense, as you could wager on a big outcome, whether bullish or bearish, with a big leveraged options position and with less risk than with an outright futures position. So why aren't I just recommending buying call options if I believe that a good production agreement will be reached? The reason is the implied volatility of the underlying options.

We're not alone in trying to leverage a bullish or possibly bearish meeting outcome, and the relative price of crude oil options, represented by their volatility, is very expensive indeed. February 2017 implied volatility is a fairly pricey 42.4%, while March comes in at a slightly less expensive 41.8%. These aren't anywhere near historic highs, but still, anything above 40% is, to me at least, at high risk for a volatility crash, wiping out premium even without moving the underlying futures much.

And what is the risk of that from this OPEC meeting? Well, historically, option volatility will tend to scream higher on a big move lower, not a big move higher -- thus making the options play right now a better move if you're looking for the OPEC meeting to be a failure. But a big production agreement, sending crude oil above $50, will probably also spike volatility, if not nearly as much. The risk would be nondescript, non-enforceable guidelines coming out of Vienna, probably sinking crude oil futures a few dollars but decimating the options volatility.

From this, the idea is to still take on some of our favorite E+Ps, despite the fact that they have rallied so strongly, and mix them with a small long position in options straddles or the OVX. On the upside, you've got some of our great E+Ps, even at extended prices that can continue to rally, with an options position you're likely to get out of for a small loss (or even a small win). On the downside, if the OPEC meeting comes to nothing, you'll recoup at least some of your stock loss with a big move in the crude oil VIX.

It's a safer way to play our oil stocks for those who haven't begun accumulating them as yet, but still based on the likelihood of an agreement in Vienna.