"Virtual currency, where it's called a bitcoin vs. a U.S. dollar, that's going to be stopped. No government will ever support a virtual currency that goes around borders and doesn't have the same controls. It's not going to happen." -- Jamie Dimon

Bitcoin. Years ago, I believe it was in late 2014, an IT worker toiling away on the trading floor of the NYSE told me that he was loading up on Bitcoin, and that so should I. Completely ignorant on the matter, I asked him what Bitcoin was. He knew his stuff. That was my intro to the term "blockchain". That worker had a total of four Bitcoin, with an intent to build a larger position. I believed that he believed what he said. I bought zero Bitcoin at the time. Bubble or not, there is no denying that both demand as well as scarcity are working in this particular digital currency's favor for some time now. The market price was on fire again Monday morning in Pacific Rim trading. Bitcoin has increased in value by some 26% just this month, and soared past $8,000 per token in early Monday trading.

I do get the whole blockchain craze. I get that this is quite possibly the future of business transaction. The middlemen, who have made their niche that space where trust must be extended by both parties in order to get almost anything done, will certainly be threatened. This concept is one reason (of many) for which I have been long and stayed long firms like Nvidia (NVDA) and Advanced Micro Devices (AMD) . Technology drives the world, and the semis are the engine. Mining blockchain is just one avenue of business for firms like this. It's not that I think the Bitcoin craze will last forever. But I do want exposure to blockchain long-term, without paying the top of the chart for its most famous by-product.

Bitcoin, or whatever crypto-currency is the hottest, will at some point threaten the planet's dominant central banks to the point that they take action, or maybe even compete in the space. By extension, the governments that enjoy reserve currency status will aid those central banks, and crypto-currencies will face far steeper regulation at that point than they ever have. Right now, any crypto-currency, even Bitcoin, is simply a speculative instrument for hopeful investment.

Has Bitcoin, or any of Bitcoin's competitors really made significant progress toward becoming a medium of exchange? Yes, I have heard some businesses here or there that have said they'll accept Bitcoin. But how would any business, especially a small, local business, value something this volatile when trying to price ordinary goods and services for ordinary clients? We are a very long way from there. Imagine the family bagel shop clerk trying to make sales in fractions of Bitcoin as the price fluctuates wildly. The ice-cream truck driver? The hot dog vendor at the ballgame?

Aaron Back wrote on ICOs for the Wall Street Journal over the weekend. From his article, I learned that according to Coindesk, more than $3.0 billion has been raised this year across more than 160 initial coin offerings. Even if there were to one day be a dominant global non-national digital currency, one that somehow survives the coming regulatory environment that will likely be an act of self-defense on behalf of the U.S., Japan, the U.K., China, and the EU, what will become of the vast majority of these "currencies"?

Jay Clayton, Chairman of the Securities and Exchange Commission, made some remarks on the topic last week. According to The National Law Review, Clayton indicated that in his view, there is a lack of information about the online platforms that list and trade these virtual coins. (Uh oh) He went further. Clayton also infers that trading said token on these platforms is susceptible to price manipulation and other fraudulent trading practices.

In what smelt to me like the paving of the road to increased regulation, Clayton seemed clear: "I have yet to see an ICO that doesn't have a sufficient number of the hallmarks of a security."

Chart of the Day (NYBXT)

What you have here is the New York Stock Exchange Bitcoin Index, which for all intents and purposes represents the value of one Bitcoin. You can see where this index went out on Friday. Keep in mind, the last sale is considerably higher in Australia as we prepare for Monday morning trade.

Can you analyze this technically? Sure. You can analyze anything technically. I like to blend fundamentals into my own personal analysis, though. The problem is that in this case, there are no fundamentals. You can say that about gold too, with one major exception. Gold has been used as a medium of exchange by the human race for 5,000 years, so there is a basic intrinsic value present in gold that is not obvious for Bitcoin.

You can see the recent bullish signal emitted by the moving average convergence divergence (MACD). The result of that is what you see in Australia Monday morning. Relative Strength went out in an overbought state, and that condition will likely be much more severely extended very shortly.

Bottom line is that I don't really believe in this investment long term, but I can't argue with the chart. Only a fool would try to argue against a chart that displays a last sale trading at 170% of the value of its own 200-Day Simple Moving Average. Bubble or not? Phenomenal, for sure. 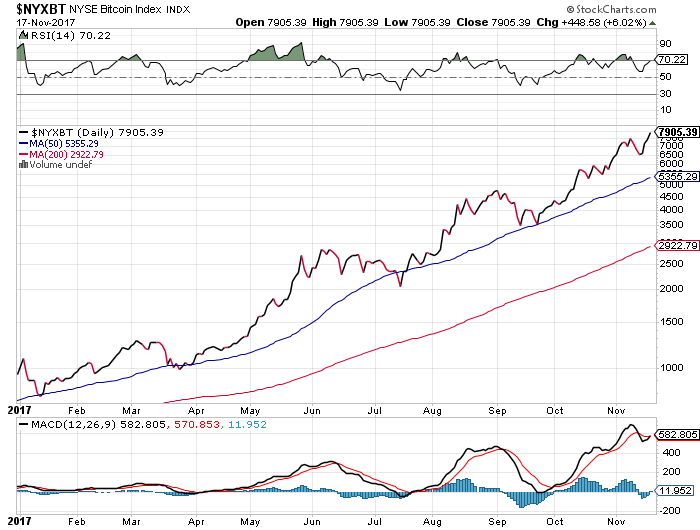 Get an email alert each time I write an article for Real Money. Click the "+Follow" next to my byline to this article.
TAGS: Investing | U.S. Equity | Regulation | Markets | Financial Services | Technology | Currencies | FOREX | How-to | IPOs | Risk Management