Color Me Not Impressed

It's no secret that I have long referred to Tesla (TSLA) as the surest short on Wall Street. I currently am flat the name, though I have both lost money earlier this year, and made it back more recently by selling these shares short. Having made my money back, I probably will not be trying to make a few bucks from that angle again any time soon. It's not that I think Tesla has suddenly turned into a profit-churning beast. It's more that Elon Musk is truly a tremendous salesman, and the folks... well, let's just say that they have become something like a cult following. There will be no way to fundamentally place any kind of value on this stock. It's all about the magic man's ability to raise money. Any future negative (or positive) bets will be done by way of the options market, therefore risking far less dough than I would by trading related equities.

Truck, Yes. Convoy? Not for a While

OK, maybe this is impressive. Musk introduced his new big rig Thursday night. The semi-autonomous tractor-trailer will be fast, we are talking zero to 60 mph in five seconds. That is much faster than existing standard diesel technology. The new trucks will be able to carry 80,000 pounds (the max allowed on U.S. highways) out to a range of 500 miles on a full charge. Musk explained that 80% of deliveries made by trucks in this country are for distances of less than 250 miles.

There's more. While these trucks will be less dependent upon human drivers, saving time by reducing stops usually spent on refueling and human needs, the firm also guarantees that these vehicles will not break down for one million miles. This is an obvious appeal to the commercial trucking industry's bottom line. In a cost-cutting world, this all seems fantastic. The stock is indeed higher Friday morning as we progress through the wee hours. The folks love Musk. I have questions, though.

Is there competition? Of course there is. TSLA trades at prices that would make one think that this firm will have a monopoly on electric vehicles on that final day. We know that this is ridiculous. Just about everyone is either manufacturing an electric car at this point, and on top of that, just about every auto manufacturer and many tech companies are working on their own autonomous driving systems. Why do you think I pound the table so often for both Nvidia (NVDA) and Intel (INTC) ? By the way, Huang and Krzanich ... now, those two are CEOs.

This is indeed where the future of the American road is headed. That road will, however, be crowded with competitors. In fact, Daimler -- a far more experienced manufacturer in the trucking space -- already has autonomous trucks on U.S. roads in the southwest. Tesla is behind Daimler in this space. No joke. Action Alerts PLUS charity portfolio holding Alphabet (GOOGL) is also considered to be closing in. Oh, don't worry, Elon Musk says that this new vehicle is set for production by 2019. He does have a track record on meeting production goals, doesn't he? It ain't pretty.

Remember August? Just three months ago, Tesla went to market with $1.8 billion worth of debt. These senior notes sold for a yield of 5.3%. Recently, these same bonds had worked their way up to yields of more than 6.3%. Nice performance. (Not.) Yes, the stock is higher thanks to last night's dog and pony show, and that enthusiasm will likely extend itself out to the bond market. We all know that on Nov. 1, third-quarter results missed expectations for earnings per share. This was the third miss in four quarters for the firm in this space. We already know that delays for the Model 3 will weigh on early 2018 earnings. What does this mean?

Well, to an untrained sloth like myself, running quarterly losses, and delayed prospects for revenue production mean increased cash burn. Increased cash burn could mean having to tap the debt markets again, earlier than expected. Hmm, but maybe those same investors, who might feel as if they were had back in August, will be less aggressive in bidding for any future offering. That's food for thought. Uh oh. Does Midas still have his touch? Tesla might have to come up with another way to raise cash, and it looks like they do have at least an idea.

Toward the end of last night's clam-bake, Tesla rolled out an updated electric roadster sports car designed in conjunction with Lotus. Zero to 60 in less than two seconds. The expected base price will be $200,000, with a deposit of $50,000. The obvious intent, at least from my perspective here, is to take advantage of some rich people who will mindlessly spend money on anything as a way to drive some revenue without hitting the debt market, and without diluting the shares. Production here is expected to begin in 2020.

So we have a firm that has failed to meet production goals for its main effort, the Model 3. Then, the next priority would be the Model Y compact SUV. Then, this firm thinks it is going to launch the truck by 2019, and then this new sports car by 2020. LOL.

Can you say "full plate"? At the very least an ambitious plan for a firm with an awful track record for meeting goals. Tesla has burned through more than $4.0 billion over the past year. Estimates are that producing the truck alone will require upfront investment of $1.7 billion. In order to gear up for Model 3 production, as well as the production of the associated batteries, the firm either borrowed, or issued shares that raised as much as $5.4 billion in this same past year... I don't know.

What I do know is that I tried to look at this firm through the prism of fundamental analysis, which is not how this thing trades. Time will tell. Competition will be fierce, but only if the market is actually there.

Chart of the Day: TSLA

First off, I want you cognizant of the fact that TSLA is the only stock in our universe that I have consistently shorted. I am flat right now, but am aware of the possibility that I am capable of negative bias, and it could be inherent in my work regarding this name. I have profited most recently by being short, but that has not always been the case. Come to your own conclusions here.

For starters, we can see that the flow of money has been weak, not just since earnings, but for the better part of two months. Relative strength is now off oversold levels, and is likely to show short-term strength on Friday. You can also see the bullish signal sent by the 12-day exponential moving average (EMA) cross over of the 26-day EMA. While this is positive, they both remain severely negative in comparison to the nine-day. That could matter if the stock were to hit a wall of resistance at some point on Friday.

As to the larger models, you can see that a 38.2% retracement level worked as support back in July. The same level was recently tested coming off of the double top of September, and things became a bit sloppy. The name looks to break out of the medium-term Pitchfork model on Friday, and will likely pierce the upper trend line upon the opening bell. Should that line become support, there is a chance that this recent negative trend has been turned. That will allow for prices of 321 or even higher. However, if that trend line fails -- as I suspect it will, once the euphoria of last night's circus fades -- a 50% retracement down to $281 seems very realistic. 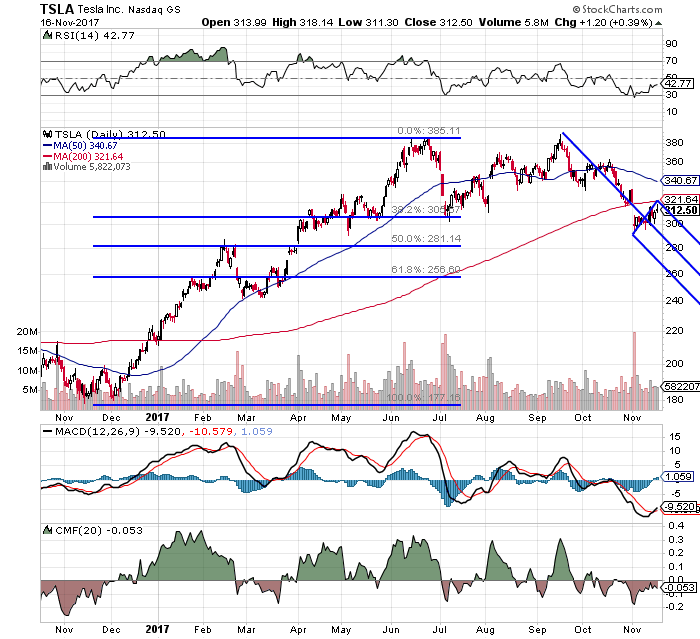 Those with a strong stomach might even reach for $260. I will not act on this name on Friday, and when I do, it will be through options, not equity. Too much human emotion involved here.

I bet all of you noticed the passage of the House version of the tax reform bill on Thursday. The broad rally across the U.S. equity markets was clearly driven by risk-on behavior, leaving behind only energy shares as well as the bond proxies. No doubt, the spark was earnings success. The markets cheered for Cisco Systems (CSCO) as that firm beat expectations and raised its numbers. The markets really cheered for Walmart (WMT) , as that firm has truly proven to be the tough kid who will wait by the flagpole for Amazon (AMZN) to leave the building after school, while slowly pounding his fists.

Still, did you see the rush to buy high yield corporate bonds? The iShares iBoxx High Yield Corporate Bond ETF (HYG) showed signs of bottoming on Wednesday, and really took off on Thursday. HYG is now up 1.5% from those Wednesday morning lows. What seems clear is that markets, though we may feel somewhat disappointed in what the House accomplished yesterday, are pricing corporate tax reform back into their models. Notice the simultaneous outperformance of the Russell 2000 (small caps), or the Transports.

Where there's smoke, there's fire. Progress in the Senate could actually complete the movement for the HYG ETF back to the levels seen in late October. Then again, the Senate is a dog far trickier to deal with than is the House. Fun to had by all during a holiday-shortened week. No doubt.

Get an email alert each time I write an article for Real Money. Click the "+Follow" next to my byline to this article.
TAGS: Investing | U.S. Equity | Consumer Discretionary | Industrials | Technology | Markets | How-to | Risk Management | Short-selling | Stocks