Equity index futures markets appear to be in a better place as we work our way through the zero dark hours. Though calm seems to have taken hold on Thursday morning, there is certainly a disturbance in the force. Beneath the placid surface, and for a plethora of reasons, there is discomfort. Earnings season is winding down, another good season, no doubt. Although the earnings environment, as well as the larger macro-economic environment that supports forward looking earnings projections are still positive, this removes one short-term catalyst to the upside.

Then there is the obvious: falling commodity prices. Crude prices have slumped this week after domestic rig counts and inventories showed signs of growth, and forward-looking views on global demand came in a bit mixed. That's not all. We have talked a lot about if not coordinated, then simultaneous growth on a global level as being at the forefront of what we, from a markets point of view, have enjoyed. Then came the October data for Chinese industrial production, retail sales, and fixed asset investment. Talk about an 800-pound gorilla. On all three counts, the Chinese economy showed a softening of the pace. What if the planet's engine for growth just is not there, or not there in expected size? One look at copper, or any industrial metal for that matter, tells a tale.

Don't go away. There's more, gang. The flattening yield curve. This morning, the spread between the yields on the U.S. 10-year and the U.S. two-year Treasuries is back down to a paltry 0.652 percentage point. That two-year is the problem, now giving up something like 1.71%, which I believe to be near enough to a post-crisis high. Oh, Mr. Market is pretty sure that the central bank will raise the fed funds rate on Dec. 13. That's already priced in. Beyond that, March currently looks like a 50/50 shot, and that will be a Fed under new leadership, anyway. Who knows? The point here is that the market does not believe in higher rates long term, or maybe just is not buying this whole growth story.

That is where this sloppy tax reform story comes in. On Wednesday, the S&P 500 gave up 0.55%. You can look it up, but the streak of 50 consecutive trading sessions without a paper loss of more than a half of a percentage point is in the books. I would love a tax cut. How about you? Seems so easy from here. Maybe not so much deep in the swamp, though. Problematic issues abound, throwing doubt not only on the passage of some kind of a bill this year, but should a bill pass, on the quality of such a deal. Don't forget that the weakness in higher yielding corporate bonds has shown us a pricing out of tax reform due to capped interest deductibility, meaning that at least partial success had already been priced in to markets. Got it?

You guys like the idea of individual tax cuts that might expire as soon as 2025? How about eliminating the Obamacare individual mandate? I do get that the mandate has always been on thin ice legally. However, it is currently law, and its removal, while creating budget space, will also raise insurance premiums. Yes, those same premiums that are already crushing the self-employed, or anyone with some income, a need for health insurance, and the lack of an available employer-sponsored health plan.

Cutting the corporate tax rate to 20% seems to be the line in the sand, drawn by the administration as non-negotiable. There are two obvious problems here. One is that this cut must be permanent. The Republican party only has 52 members in the Senate. They can only lose two bodies. The final product can add a maximum of $1.5 trillion to the federal deficit over the first decade. On top of that, this reform must be deficit-neutral beyond said decade. Allowing individual tax cuts to expire will get different folks elected in 2018. Allowing corporate tax cuts to be temporary will not inspire expected growth in business spending, and not increase competition for labor. That, my friends, was the point of this whole exercise in the first place.

Oh, did I mention that Senator Ron Johnson (not the former NY Giant running back), Republican from Wisconsin, has spoken in dissent of the Senate bill in its current form? This, the party cannot afford, though from a selfish point of view I agree with Sen. Johnson. While both the House and the Senate plans aim for 20% corporate tax rates, other types of businesses will have to pay a higher rate than that. Pass-through businesses, of which my business happens to be one, are sole-proprietors, partnerships, LLCs, and S Corporations. Under the House plan, those businesses will all pay 25%, and under the Senate plan, this rate would be 30%.

Just for some background, the majority of U.S. businesses are organized as pass-throughs, though many are small business types in nature. Business income across the U.S. is almost split evenly between corporates, and pass-throughs. Of course, Sen. Johnson has a point. This must matter a great deal to his constituency. I find it doubtful that he would be alone on this issue. My thought is that several issues need to be ironed over before tax reform might be a reality. We are not as close to what I think of as impactfully positive reform as some might think. If reform is indeed close, then I find it likely that quality will indeed suffer.

As Apple (AAPL) struggled through its Wednesday action, I received a question from a reader asking me to take another look at the stock. Being long the shares myself, I was eager to do so anyway. So here goes.

On Oct. 17, well ahead of earnings and ahead of the Cramer Teach-In event, I dove deep on this stock for my then Market Recon piece. My conclusions at the time were for equity ownership with a target price of $176, and aggressive target price of $197, and a panic point of $141. By the way, the stock peaked at $176 in response to the fourth-quarter numbers released on Nov. 2, as well as first-quarter projections. I don't know if everyone gave you a target within 24 cents of the actual spike, but I do know you got that one here.

Now that AAPL -- which, by the way, is a holding in the Action Alerts PLUS charity portfolio that Jim Cramer co-manages -- has seen some profit taking, not to mention price erosion, what does one do? As always, I tell you what I am doing, or what I am thinking of doing. Your decisions are your decisions. Sorry about that gang, but there is feedback when I am wrong, even with my own investments. 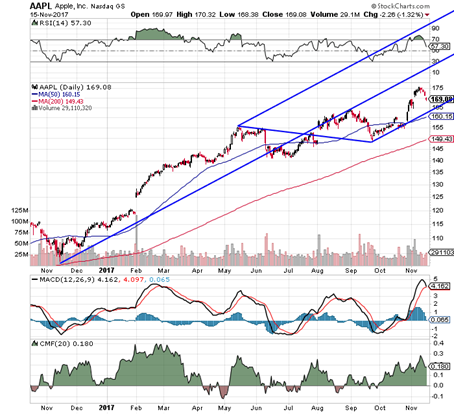 On this new chart, some technical indicators have changed over the past month. Short-term, you can plainly see that the 12-day exponential moving average (EMA) has turned the moving average convergence divergence (MACD) toward a bearish crossover. Note how far above the zero-bound the nine-day EMA currently is. In my opinion, that indicates profit taking by individuals, and not a corrective shift.

The Chaikin Money Flow, visible on the bottom, tells me a similar story: that institutional dollars continue to be invested here. Relative Strength is well off overbought levels, but not at all scary, in my opinion.

Let's take a look at the Pitchfork. After all, this is one almost forgotten slice of technical analysis that I actually love, and seems to work for this stock. You can see at this point that although levels around $169 do not feel so hot, the stock could actually test levels around $163. This is the area where I would be comfortable adding to my long, even though this spot is well above my point of entry.

I am going to now raise my target price to $183 from $176, and my aggressive target to an even $200 from $197. See the 200-day simple moving average (SMA). That's where I am going with my stop loss. Like with my targets, I am raising my panic point to $150 from $141. This nearly guarantees that unless you are new to this name, in the event of a catastrophic selloff, you still walk away with your principal investment plus some lunch money.

If you happen to be one of those souls that bought the shares in May, August, or most recently without ever adding a tranche at lower prices, then you do have a rather high average point of entry, and you might want to work your out differently than I.

Get an email alert each time I write an article for Real Money. Click the "+Follow" next to my byline to this article.
TAGS: Investing | U.S. Equity | Rates and Bonds | Markets | Treasury Bonds | Financial Services | Technology | Fixed income | How-to | Politics | Risk Management | Stocks

EPAM Systems: Is It Time to Buy or Sell?

Here's how I see it.