"The extremes of jungles, mountains, and deserts are inherently dangerous places." -- Bear Grylls

There are few things in life more enjoyable than sitting at a table in your local Buffalo Wild Wings (BWLD) restaurant in front of a plate of Ultimate Nachos, while watching a sporting event on a large screen TV -- any sporting event. One thing surely more enjoyable would be, Tuesday morning, to watch the reaction of the individual shareholder who tuned out of the financial markets late on Monday, when he or she sees where this stock is now trading. The news? Private equity firm Roark Capital Group has apparently sometime over the past few weeks made a $2.3 billion takeover bid for BWLD. Long the shares? Me neither.

Those shares went out last night at $117.25. The bid? That comes to more than $150 per share. Huzzah. Over the past year, these shares have traded as high as $165, and as low as $95, so this is very welcome news indeed for the beleaguered "buy-and-hold" crowd. Who's next? As our pal Jim Cramer likes to say -- "Look for the pin action". Remember JAB Holding? Well, they just agreed to buy Au Bon Pain last week, after snapping up Panera Bread last spring. That came on top of the Popeyes Louisiana Kitchen sale to Restaurant Brands International QSR, a firm that already had both Tim Hortons and Burger King in their portfolio. This space is alive.

The Future of Energy

About a month ago, we looked at $54 WTI Crude as a gateway, a gateway which, if swung open, could allow the commodity to trade as high as $58, given current currency valuations. Thanks to the corruption investigation that saw many leaders and royals arrested in Saudi Arabia, as well as the geopolitical tensions in the region, that is almost precisely what transpired. Resistance showed up closer to $57.50 a barrel, but close enough to bail out a lot of energy space longs, even if associated equities did generally trail the commodity.

That move has now been fully digested. The tougher question is now, can WTI head up to $60, or are these levels now unsustainable without a further supportive catalyst? You probably saw OPEC's report on Monday. If you did not, the former cartel's production as a group did drop by 0.46% in October from September. OPEC also raised their expectations for global demand for both this year and next. OPEC nations and those participating with OPEC in this ongoing production freeze will meet in about two weeks in Vienna. The deal currently in place is expected by almost all to be extended, possibly through the end of 2018.

There are wildcards. One is Russia. Though part of the deal, Russia has been slowly increasing production all year. The other is the U.S. Most oil watchers expected U.S. shale to crank production back up as soon as WTI started trading around $50. That was not the case. Last week, however, the U.S. rig count increased by nine. Is this where U.S. drillers step up production? Is this where they feel that they will squeeze the most money out of the business? The IEA (International Energy Administration) clearly thinks that the U.S. is the bully on the block. The global watchdog in a statement last night said, "Growth in U.S. oil output until 2025 will be the strongest seen by any country in the history of crude markets, making it the 'undisputed' leader among global producers." Whoa, Nelly.

That's not really a positive for the market price of the commodity, though. Over a number of years, you can also expect global demand for electricity to soar, particularly across Asia. Think China and India. Those nations will keep needing more. Keep in mind that the planet earth will likely never ever need to consume less energy tomorrow than it did yesterday. Renewable energy sources will continue to grow in importance, but will those sources match demand, or even come close? Natural Gas is still cheap enough to bet on.

My simple thought is this: Go ahead and play energy, I do. Just do not count on further increases in oil prices from here. If Brent and WTI do rise from here, all the better. The long-term play is, in my opinion, natural gas. From an equity perspective, I think that you want dual exposure. Royal Dutch Shell (RDS.A) would be a global play there, and it yields 5.8%. This is also one reason why I never give up on Action Alerts PLUS charity portfolio holding Apache (APA) . It's an Alpine High thing. We could just be scratching that surface.

Did You Expect Anything Else?

The Federal Reserve Bank wrestles with raising the fed funds rate again in December, and then repeating that feat on a timely basis throughout 2018. That same central bank has started unwinding its massive balance sheet. Mark Carney's Bank of England has just lifted its benchmark interest rate, and the European Central Bank has also waggled back and forth on moving policy in a tighter direction. Haruhiko Kuroda has other ideas.

Kuroda, Governor of the Bank of Japan, spoke on Monday from Zurich. "The bank will continue to persist with powerful monetary easing to ensure that such positive developments (Japanese economic growth) are not cut short". Remember, at the October policy meeting, the BOJ kept its short-term rates negative. Kuroda explains that though his nation has left an actual state of deflation, the nation's "mindset" has not changed. His inflation target remains 2%, and the BOJ plans to maintain what it has been doing until that target is met. Kuroda sees this happening in 2019. Repeat after me: "Currency Wars". Cue Jim Rickards.

The spread between the two-year and 10-year U.S. Treasury Notes has been moving the wrong way, actually bottoming out at 0.68 percentage points last week. Monday spawned a slight reprieve, but this morning that spread is back down to 0.704 percentage points. We all know the deal? Folks fear an inversion of this curve (even though we are not even close to seeing this occurrence) because such a twist has correctly predicted something like "15" of the last nine recessions.

The U.S. economy will experience another recession. I promise. Just not now, and probably not that soon, either. The problem here is that by raising short term rates, the Federal Reserve is pushing out the short end of the curve. Such policy is having little impact on the long end, for a myriad of reasons. One would be that nobody believes in inflation, and they also believe that the central banks attempt to normalize monetary conditions will fail.

Do I believe this? Well, I do believe that this attempt to normalize policy might fail. I just think that this might create a condition where consumer level inflation becomes less stable, rather than more so. On the long end, you also have the global investor looking to park money anywhere, and still get paid to do it. Call it the international search for yield.

My immediate concern is not based on recessionary fears, nor on the predictability of longer-term consumer level inflation. My concern is for the banks. A flattening yield curve makes it awfully tough for U.S. banks to make money through traditional banking means, no matter how much the regulatory environment eases. If you follow me, you know I've been bullish on tech and energy. You know that I've been taking profits across retail, the media, and even aerospace. You might also know that I've been trying to be bullish on the banks. This one is not working yet. Yes, of course overall, this trade is positive for the year, but it's not positive lately.

Chart of the Day (KBE)

Let's take a look at the SPDR S&P Bank ETF (KBE) , and see what the charts tell us. I have believed that this underperformer was primed for a break-out. This does not appear to be what's happening. At least, not yet.

What we can see here is the sharp selloff for this fund in November, as the banks fell to the mercy of the yield curve. Relative Strength is wobbly, not giving off any signal of significance.

The moving average convergence divergence (MACD) has not been a November friend. Money Flow turned against us. In fact, KBE has traded in a specified range ever since last year's election. You can see that there was indeed support, ever so sloppy, at a 38.2% retracement of the move from the September lows through the October highs. That needs to hold.

The current price level does not yet worry me. A return to price levels above $46 is as likely as would be a test of levels just above $42. That is the spot to worry about. You do not want to be wearing these on a break of that level. At least, I don't. I won't be telling you what to do with your money. 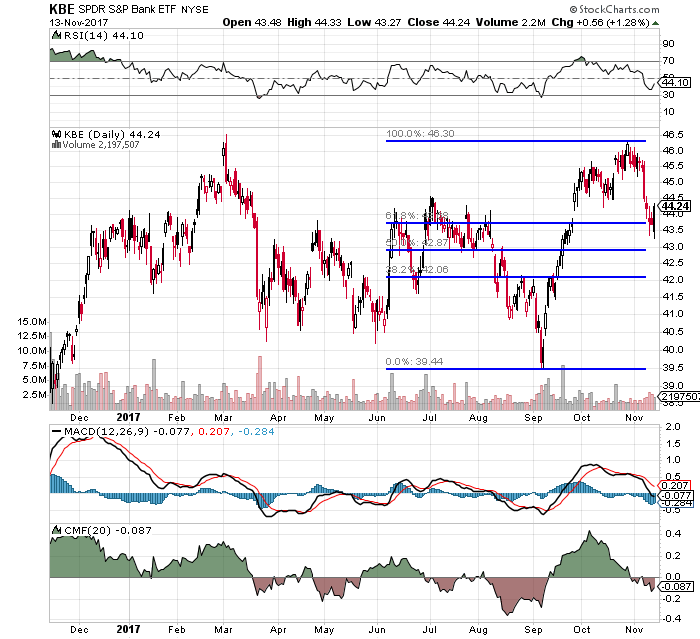