"When you break up, your whole identity is shattered. It's like death." -- Dennis Quaid

Choppy Beneath the Surface

Yes, it is indeed a tax reform thing. If you read a lot, then you know that much was made over the weekend of the fact that last week put an end to the positive run of weekly victories that had been posted by the major equity indices. The S&P 500 gave up 0.4% for the week. The Dow, -0.5%. For the broad indices, which measure the performance of equities in general, the streak had reached eight consecutive weeks.

Conventional wisdom had it that markets were not at all happy with the Senate tax plan, produced last week, which looks to delay corporate tax cuts out a year, into 2019. Others look to the dour performance of the corporate high yield bond market as the cause of the pause. In reality, that high-yield group is actually being pushed around by the Republican tax plans itself.

To be sure, there is plenty for business folks to like within these rather inconsistent plans. Hopefully, the House and the Senate come to some kind of compromise on how far out to push the effective date of those lower corporate rates. Possibly even more important to businesses will be full and immediate expensing of capital spending. Then there is the possible repatriation of cash held abroad. These are positives that do not have a looming negative side for businesses.

Now, for the big ugly. The reason that you have seen high yield bonds underperform over the past week to 10 days, not to mention the small-caps (from an equity perspective), would be that these plans limit the deductibility of interest payments. Under these GOP plans, those deductions would be capped for corporations whose net interest comes to more than 30% of earnings before interest, taxes, depreciation, and amortization (EBITDA).

As you might imagine, a rule like this would hit small-caps in greater numbers than it might the blue chips, or really any corporate borrower whose debt might not be considered investment grade. Over the past two weeks, it has been reported that nearly $1.0 billion has been withdrawn from high yield bond funds. Illustrated below in Chart A, are the performances of the S&P 500, Russell 2000, and the iShares iBoxx High Yield Corporate Bond ETF (HYG) . This chart should make clear what is happening beneath the surface of what looks from a broader snap shot to be calm waters.

These "undersea" currents have the potential to push investment over coming weeks toward quality in both equities and debt. Keep your eyes on this trend.

You kids long General Electric (GE) ? Really? Me too. The point is that you are not alone. I got myself in a little early, thinking Warren Buffett getting out (the removal of a sizable chunk on the offer side) of the name and Jeffrey Immelt taking his leave to both be positives. Buffett timed his sale better than I timed my entry, but I still believe the latter to be positive, as I have found it easy to get behind John Flannery's pragmatic yet aggressive style of leadership. Is he, indeed, the right leader? We'll let you know down the road. For today is the big day that Flannery pointed to as when he would update investors on his broad review of this sprawling (not in a good way) corporation.

The shares are down 35% this year. For comparison's sake, the S&P 500 has gained 15% over that time. The Dow Jones Industrial Average debuted in 1896. GE is the sole remaining member of the Dow's original line-up. To put this in perspective, the Baltimore Orioles won the National League pennant that year, and the USS Maine would still not sink in Havana Harbor for another two years. Does GE's membership in this blue-chip index now have an expiration date? With a share price that has withered, that decision may boil down to what John Flannery lays out as a future path for this corporation later today.

The Dividend and a New Focus

We all know that GE has a cash flow problem -- or we all think we know. The firm has famously made its vital statistics among the hardest to read by throwing more data at you, and slicing said data in many ways as to make what's important difficult to find. Not to mention difficult to understand. GE's dividend payments exceed $8.0 billion a year. The street is expecting, and has priced in at least a partial cut to this dividend, which now yields 4.69%. There will be more than a dividend cut today. A lot more.

Expectations are that the firm will focus its immediate future on core business lines that seem to be working in 2017. Though parts of the firm will be shed, a broad breakup of these businesses is not yet expected. This focus will likely be placed squarely upon Aviation, Power, and Health Care. You can expect the firm to try to rid itself of Transportation (including the locomotive business), Lighting (one of the firm's oldest divisions), and Baker Hughes (a separately traded public company that GE owns 69% of).

Flannery had already pledged to sell upwards of $20 billion worth of corporate assets, and those wheels will be set in motion today. The firm also employs roughly 300,000 people. That number will also see a reduction going forward.

Now, with a share price that has been dragged through the mud and with the slicing and dicing of this sprawling (again, that's a bad thing) conglomerate, chances are that the firm will ultimately be shown the door by the Dow Jones Industrial Average, and probably rightfully so. As an investor, this does not bother me all that much.

The index itself has lost its luster over time, and is no longer the highly focused upon index that the industry points to as the broad measure of stock market performance. That mantle of leadership has been taken by the S&P 500, though over time the two do correlate nicely.

The chart of the high yield bonds ETF HYG versus small-caps versus the S&P 500 clearly shows the recent underperformance of lower quality across both the equities and corporate debt space since the release of the Republican tax plans.

This implies two things to me. A mild flight to quality could be in the offing, and tax reform has at least been partially priced into this marketplace as areas of expected pain are now seeing that pain priced in.

How much can a chart help one trade a stock when the underlying fundamentals of a company are about to drastically change? The answer for me, is that fundamentals always in the end, trump technicals. That said, technicals can never be completely ignored, especially in the modern era, where algorithms play an ever-increased role in price discovery. Algos, and the kids that write them read charts.

Still, knowing that a firm is about to alter its own fundamentals, I would focus more on what I call "strategic" indicators such as Fibonacci levels and Pitchfork Models than I would on "tactical" indicators such as Relative Strength, and the moving average convergence divergence (MACD). Money Flow indicators remain important to me as well.

You may recall that in the past I have laid out a price target of $28, an aggressive target of $34, and a panic point of $19 for this stock. I will now have to scrap those levels, as they are no longer valid in my opinion.

Both a 38.2% retracement from these lows, and the Pitchfork suggest that any short-term pop in the share price of GE will die out at a very optimistic $24. That now becomes my target. I will not be so bold as to plan an aggressive target at this point. My panic point would now drop to $18 as that is what the Pitchfork suggests.

Now, as a trader, I have left myself plenty of dry powder, only purchasing a rough 40% of my original intended long position, and I have greatly reduced my cost over time by writing options strangles against the stock. My average price is now down to a smidge above $23. The $18 level does not mean that I have to bail. It simply means that I have to make a decision given the peculiar circumstance. 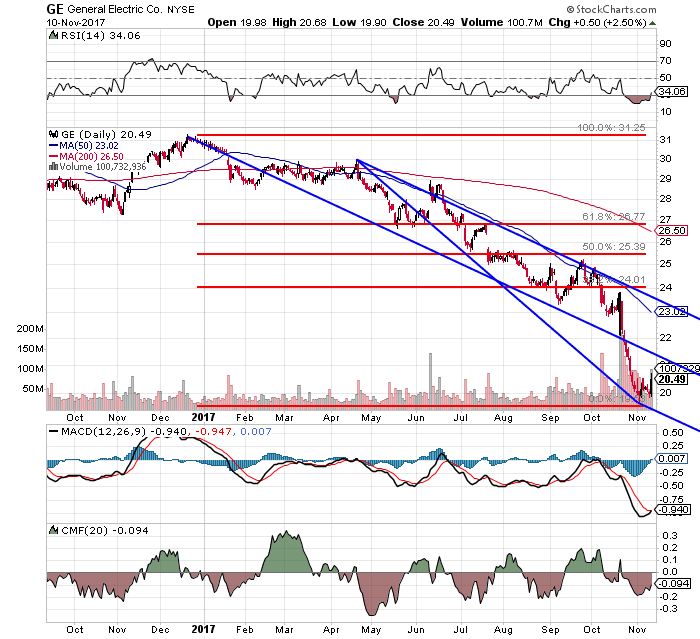 This is no longer an investment for me. This has become an exercise in risk management. Either way, this could be fun and challenging.