We last covered Action Alerts PLUS holding Magellan Midstream Partners (MMP)  in late August, and we wrote: "Prices are still in a downtrend but the potential of buyers to show up again at a former support area should mean we put MMP on our watch list for a possible purchase."

Fast-forward to mid-November and we can see the August low has held and a higher low around $66 at the end of October has also held. The technical signals are mixed now but we are again seeing an area where buyers are nibbling at the long side.

Let's drill a little deeper into the charts and indicators to see how things look into year-end.

In this daily bar chart of MMP, above, we can see two trends. There is a downtrend from peaks in January and February to a low in August. There is a sideways trend from June bounded by $72 on the upside and the $66-$64 area on the downside. During the downtrend, the slope of the 50-day moving average line was bearish. Since June, the slope of the 50-day average line has turned flat and is now rising. The 200-day line is pointed down, however.

The On-Balance-Volume (OBV) line declined from February to August but has held the August low since. The trend-following Moving Average Convergence Divergence (MACD) oscillator is below the zero line in a bearish mode but it probably won't take much of a rally to turn the indicators bullish again.

In this weekly bar chart of MMP, above, we can see prices are below the declining 40-week moving average line. The weekly OBV line shows a long decline from late 2014, but the line has not made a new low in the past three months. The weekly MACD oscillator is poised for a possible upside crossover, depending on the price action in the next few weeks. 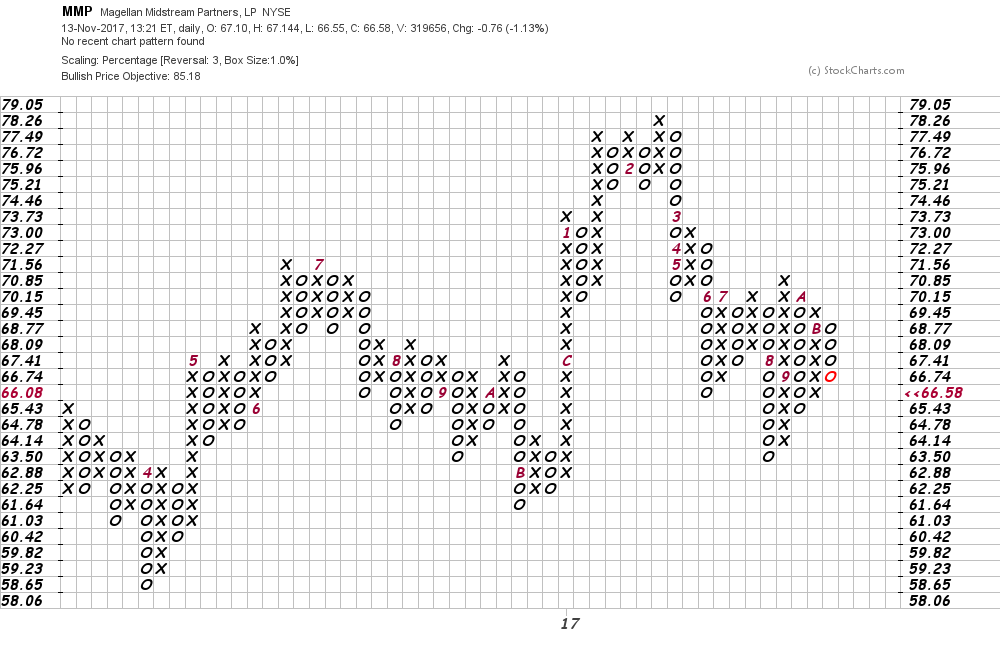 In this Point and Figure chart, above, we can see a decline to $65.43 will be bearish while a rally to $69.45 could start a bullish move to the upside.

Bottom line: MMP looks like it is in "limbo land" -- not giving us bearish signals and not yet giving us bullish signals. Despite this in-between purgatory, I favor an upside breakout. I would go long on a close above $70, risking a close below $66.

It's Only a Month, but This Deep-Value Portfolio Is Performing Quite Nicely

The aggregate return of the 2021 Double Net Value Portfolio one month since inception is outpacing a handful of Russell indices.

Bases in the energy market can take a long time to form.