Energy Transfer Partners, L.P. (ETP) last was reviewed near the end of August. At that time we summed up our observations this way: "Bottom line: a 12% yield on ETP is probably tempting, but it wouldn't hurt to see the chart bottom first. Heavy volume and slowing momentum are signs that a turnaround could be in the making, but I want to see a higher low on the daily chart before probing the long side."

The price of ETP has slipped lower since late August and the yield had pushed higher to an even more tempting 13.66% as of Friday. A five-month bullish divergence and a possible higher low last week is begging us to probe the long side. Let's review the latest charts and indicators to see if we can catch a reversal.

In this daily bar chart of ETP, above, we can see that prices are still in a downtrend, but we may have established a higher low last week. A rally above $18 would be a good confirmation of that low, so we are watching ETP for its next move.

ETP is still below the declining 50-day moving average line and the slower-to-react 200-day moving average line. The daily On-Balance-Volume (OBV) line has been weakening since March, but this month it has not made a new low for the move down. It still might make a new low, but right now it has not and we could be starting a reversal. In the lower panel is the 12-day momentum study, which shows higher lows from June when prices have made lower lows; this is a bullish divergence and tells us that the pace of the decline has slowed.

In this weekly bar chart of ETP, above, going back three years we can see that prices are retesting the lows of early 2016. ETP is below the declining 40-week moving average line. The weekly OBV line has been in a steep decline since May. The 12-week momentum study in the lower panel shows a bullish divergence since November as momentum has made higher lows while prices still made lower lows. 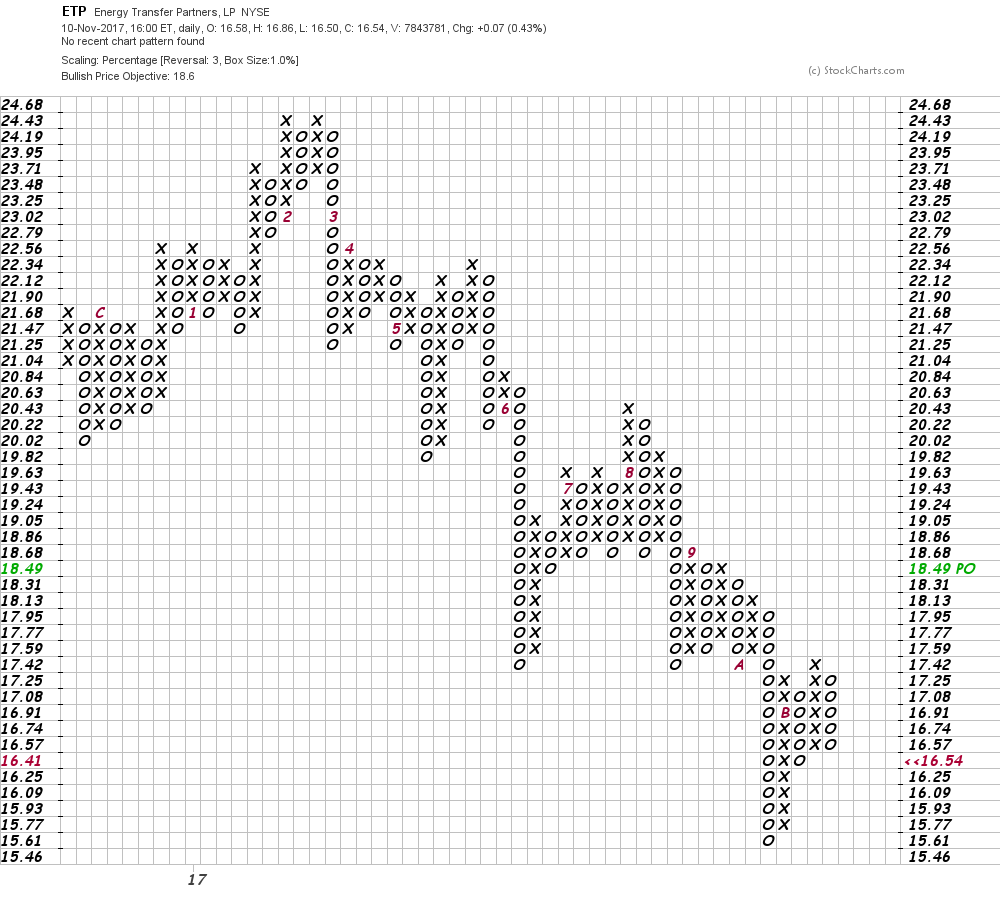 In this Point and Figure chart of ETP, above, we can see that prices are still in a downtrend but that a rally to $17.59 will be a small breakout on the upside and open the way for a possible rally to $18.60.

Bottom line: I do not typically recommend buying in a downtrend, but the bullish divergence on ETP and the possibility of a higher low being made has pushed me to recommend that aggressive traders could probe the long side of ETP here, risking a close below $16. Add to longs on a rally above $17.59.

Get an email alert each time I write an article for Real Money. Click the "+Follow" next to my byline to this article.
TAGS: Investing | U.S. Equity | Energy | How-to | MLPs | Risk Management | Stocks