"Anxiety is the hand maiden of creativity." -- T.S. Eliot

The "Ugly Stick" made a pass at Wall Street on Thursday. The stick thought about swinging for the fences, and then crawled back into its hiding place. This stick knows when market participants are scared. Knows when the slightest change in the atmosphere will turn the most confident and hopeful of investors into one whose only concern becomes preservation of capital.

When the stick is awoken from its peaceful slumber, prices fall, and fall hard. The action in equity index futures markets early this Friday morning is making sure that we know the stick is still restless -- still thinking about taking your money. To be sure, there are reasons, maybe for the first time in a while, to be concerned about preserving some capital. I have been part of that "buy the dip" crowd for years now. On Thursday, I participated at the lows, but far less aggressively than in similar days in recent months and years. I made sure that I got my price in both the securities involved, and with the S&P 500 hitting a support level. No room for human error. No room for screwing around.

Want to blame the bond market? Not a bad idea. It's not really the collapsing spread that we see in the Treasury market. Yes, the 10 year/two-year, and 30 year/five-year spread are badly compressed, and that is why your banking names have been beaten down, but is this truly a concern for the broader marketplace? If you think the financials have to lead, then yes, and to be bluntly honest, any sustained increase in economic growth will have to be led by those who profit from the lending of money.

How about junk bonds? Nobody loves junk anymore. The search for yield had benefited this group for years now. Could it be as monetary conditions normalize, and in turn volatility normalizes, that the investor will also normalizes his or her ability to properly put a price on credit and risk? Hmm. This one is worth watching.

Then there are the competing tax plans that we see coming out of the House of Representatives as well as the U.S. Senate. These plans seem to agree on several items. They both repeal the alternative minimum tax. That's good. Both nearly double the standard deduction. Both allow for immediate write-offs for business expensing (for five years).

That's where blatant stupidity starts to creep into the picture. I will not get into specific numbers, for this is supposed to be a short morning note. Two of the several differences in the Senate plan from the House plan are that in this new Senate plan, the corporate tax rate would drop to 20%, and likely be permanent, but be delayed into 2019. Well, that's a solid negative. How about tax brackets? They've got seven of them. That's what we have now, Hey Vern? Shhh. I'm thinking. Can't make this stuff up, can we? Remember the idea of fitting your tax return on a postcard. It's as if these guys screw up consistently, on purpose. Who knows what that Ugly Stick would have done yesterday afternoon if the House plan had not made progress toward a full house vote in the coming week or so?

May the Force Be with You

Walt Disney (DIS) reported its quarterly numbers Thursday night, and they weren't really all that impressive. The stock reacted Thursday night after the close, as the fast money gang with their terrible, swift swords took it down several percentage points. The CEO Bob Iger used an old Jedi mind trick during the conference call to stem the tide. The crowd went wild. Many shares were purchased, and the stock quickly regained its lofty Thursday trading levels.

Let's talk about operating income. Media Networks. Down 12%. Studio Entertainment? Down 43%. Consumer Products (to include interactive media)? Down 12%. Hmm. There's a trend here. Oh, Parks and Resorts were strong, but with a weakened 2017 U.S. dollar, how much longer can that go on? International travel is very important to the mouse. There are positives on the way. Mr. Iger made sure that you know that last night.

1) ESPN. The new ESPN app will likely launch this spring. Remember BAM? Voila. Scores? Highlights? Try authenticated streaming of sporting events for cable customers. Pricing is yet to be determined. It is likely, however, that tertiary sporting events that bring with them a small, but built-in inelastic demand will come with a price. How bad do you want it? Bob Iger is going to find out.

2) Even more important than the ESPN app will be the general direct-to-consumer streaming service chock full of all of that content that the firm is pulling back from Netflix (NFLX) . 2019? Far away, if you're a corporate tax cut. Not so much, really, if you're a streaming service with loads of content. This new service will include offerings from Disney Studios, Pixar, Lucasfilm, and Marvel. The service is expected to feature not only original series (Star Wars?), but newly created films (High School Musical?) as well. Price point? let's just say that word on the street is that Netflix may be nearing the end of its ability to raise prices across its customer base. Disney playing the role of Amazon AMZN on pricing. Hmm.

3) The firm has signed Ryan Johnson to possibly develop an additional Star Wars trilogy beyond the year 2020. This is kind of a big deal, gang, assuming that Star Wars never cools off.

My Thoughts on Disney

You all know that I came into earnings long the shares. My thoughts are that parts of this business are obviously struggling, and that while the future of this firm is bright, there will undoubtedly be rough patches.

For the "set it and forget it" crowd, I believe that DIS is a long-term buy. For the more active crowd, I am going to look to make an exit around here and try to benefit from both what Bob Iger said last night, and the premium that the potential for increased content from the Fox talks put into the share price earlier this week.

If successfully extracted from the name, I am thinking that I can get back in cheaper, later. Hey, that's why they call this a market.

Jim Cramer has a pet dog that he renamed Nvidia. The dog used to go by Everest. Nvidia, Everest... the charts are similar. Nvidia (the firm, not the dog) reported third-quarter earnings Friday night. It crushed EPA expectations by $0.26. It crushed expectations for revenue by $280 million on year-over-year growth of 32%. If I grew 32% over the past year, I'd be almost nine feet tall now.

Remember way back on Thursday, when I told you that gaming was still the most important line item among Nvidia's data? Well, of the $2.64 billion worth of revenue that the firm brought in during the quarter, gaming accounted for $1.56 million. In other words, gaming is still 59% of this firm's business (up from 57%). That is, however, not what impresses me most here. Yes, revenue derived from crypto-currencies was indeed lower, but that larger group (OEM & IP) still showed growth. Even that is not what most impresses me. ProViz? Up 15%. Nope. Not ProViz.

What most impresses me as I peruse everything released by NVDA last night is the performance of the Data Center. This was a hiccup for the firm in the second quarter. That segment of the firm's overall business printed eye-popping revenue of $501 million for the quarter, or year-over-year growth of 109%. Nvidia CEO Jensen Huang said it all when he said "Our Volta GPU has been embraced by every major internet and cloud service provider, and computer maker." Huzzah!! Who buys what Nvidia sells? Nobody, really. Just Alibaba BABA, Baidu BIDU, Amazon AMZN, Facebook FB, Alphabet GOOG and Microsoft MSFT, to name a few. You may have heard of a few of them. Then, there are the autos. No time for that right now, but that group saw 13% year-on-year growth as well.

I am long this name, and happy to stay long, even if the algos try to rotate out of tech again. This one can be too costly to trade out of and try to get back in without chasing. Been there, done that.

Chart of the Day: Nvidia

This chart of Nvidia (NVDA) is so interesting. First off, we'll consider the current trend to have begun with the bottom created in early July. One could make the argument that the current trend actually begins two months earlier, or even two years earlier. Two things jump out at you immediately.

1) The Money Flow is just incredible. Healthy, non-stop inflows for more than six months now. You do not see that every day.

2) After Thursday's regular session selloff, relative strength is no longer emitting signs of an overbought condition. That could change on the open.

It is easy to see from the April lows through to the May highs that the June pullback almost perfectly respected a first-line 38.2% retracement support level. When using that same support as the low on a new Fibonacci model that runs through the highs of very early November, suggested support would come in around $186. Our 50-day simple moving average is now $186.99. So, this is approximately where we might move to capital preservation mode if the worm were to turn against us. 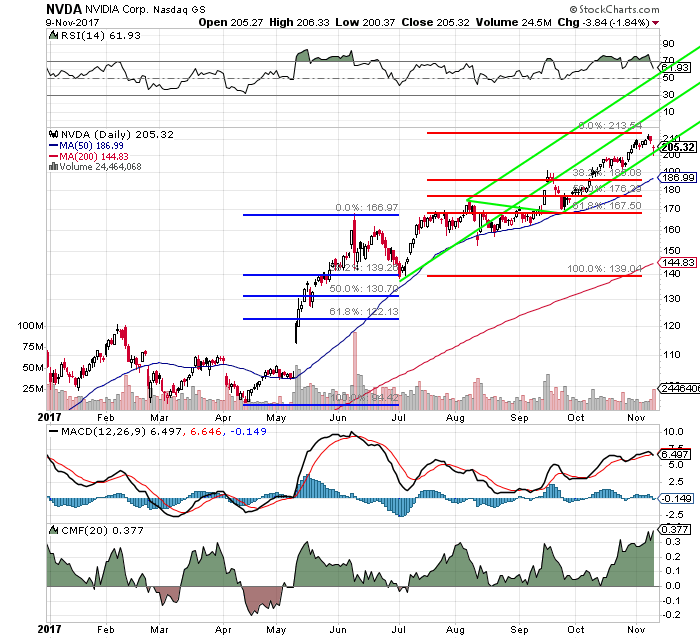 Now, let's go to the pitchfork. You can see that the lower tine has been tested as short-term support since late September, and that Thursday's pre-earnings action proved particularly challenging.

We expect the share price to bounce sharply from there Friday morning. Hopefully, the moving average convergence divergence (MACD) will not allow for that bearish crossover that appeared imminent just yesterday, even if profit takers do show up in early trade.

Get an email alert each time I write an article for Real Money. Click the "+Follow" next to my byline to this article.
TAGS: Investing | U.S. Equity | Industrials | Technology | Consumer Discretionary | Earnings | Markets | Economy | Entertainment | How-to | Risk Management | Stocks