"Survival was my only hope, success my only revenge." -- Patricia Cornwell

You all know how it is when one attends a sporting event. The crowd hushes, as the realization spreads across their accumulated masses that the home team is about to enter the arena. It is at that moment that every fan still believes that everything might go right for their team that day, particularly when playing the role of underdog. A football team runs through a paper banner, so as to hide the team, making them seem as if they explode onto the playing field. I played hockey. In that sport, we come out of a tunnel, and into a spotlight, so as to make us seem larger than life as we hit the ice.

Earnings season has gone rather well to this point. Nearly three quarters of already reported firms comprising the S&P 500 have beaten expectations for earnings per share. Earnings themselves have grown about 8% year over year. Revenue? They're beating pre-season expectations as well. So far, so good, right? Do you remember the movie "Stripes"? Do you remember the character played by John Larroquette? There is one scene where Larroquette (playing a young officer) is watching soldiers train on an obstacle course. He turns to the soldier next to him, saying something like: "These are fine looking men, Corporal. Are these my men?" The Corporal, almost afraid to answer, replies "Uh, No Sir. Here come your men now" -- and the mostly motley of unorganized masses runs out of the forest, and approaches the obstacle course.

Well, ladies and gentlemen... it's been a fine earnings season. Here come the retailers. You all have certain chains that you secretly root for. Thursday morning, you'll hear from Macy's (M) , Dillard's (DDS) and Kohl's (KSS) . This afternoon, while the world focuses upon Nvidia (NVDA) and Disney (DIS) , Nordstrom (JWN) will quietly cross the wire. Brick and mortar retailers have been beaten this year in brutal fashion. Expectations for the group this quarter are for earnings that approach year-over-year declines of something like 15% to 17%. While e-commerce continues to grow, retailers have been left wondering what to do with all of their commercial property that no longer seems to hold so much unlocked potential. If those properties were indeed as valuable as many folks originally thought, we wouldn't be talking about Macy's dividend yield on a regular basis.

What will be even more important than actual quarterly performance for this group, will be how the individual CEOs handle plans (and questions) regarding the coming holiday season. Christmas comes 32 days after Thanksgiving this year. One more day of shopping than in 2016. The big day falls on a Monday. Two days of power shopping for many prior to the gift-giving event. Like recovering a fumble on the opposing two-yard line, this should be the best chance that this group has had to shine, pretty much since the cows came home. Should be.

Those 32 days represent less than 9% of the calendar year, yet that timeframe is expected to be when roughly 20% of all retail sales for 2017 will occur. Most expect to see brick-and- mortar sales increase by 3.5% to 4.5% over last year for this period. As my colleague here at The Street and co-manager of the "Stocks Under $10" portfolio, Chris Versace, points out, eMarketer expects U.S. e-commerce to grow by as much as 16.6% for the season. Will Amazon AMZN continue to steal everyone's lunch? I think so -- or at least, almost everyone's.

In my opinion, there are two types of retailers that have the best chance to survive the current environment in some kind of decent shape. There is the one that puts up both fists and is willing to fight the bully after school, even if it hurts. That would be Walmart (WMT) . Willing to spend, willing to compete, willing to learn about their enemy. Willing to confront that enemy with a base of fire head on, while sending smaller units out to cover various avenues of escape. I have been on the WMT bandwagon for many months, and this has been a very solid trade.

Then, there is the smaller kid, who convinces the bully that they can be friends. The bully likes having a kid around who makes him feel important and laughs at all of his jokes. The bully leaves that kid alone... for now. That kid is Kohl's. Accepting returns for Amazon (AMZN) . Selling Amazon products in the stores. KSS may have found a niche. Survival. This has also been a solid long for my portfolio, despite what folks might think. On top of that, the dividend remains attractive.

What Does the Fox Say?

Another industry struggling under the weight of technological progress and compressed margins has been entertainment. Twenty-First Century Fox reported fiscal fist-quarter earnings last night. The firm met expectations (though declining) for earnings per share, while beating revenue projections. In fact, those revenues printed up 7.5% year over year. The stock has barely reacted overnight, perhaps due to the fact that this equity is up nearly 10% from its Monday lows, after news broke that there had been talks with Disney regarding selling large portions of its businesses. By the way, on that topic, former FCC Commissioner Robert McDonell speculated on Wednesday that such a deal would indeed likely successfully pass regulatory hurdles. I found that interesting.

First off, Executive Chairman Lachlan Murdoch refused talk of any potential deal in Wednesday night's call. That should not surprise. Fox's cable networks seem to have done fairly well, considering. Overall, performance is mixed. Revenue derived from domestic affiliate fees grew by 11%. That's the dough that distributors pay to carry Fox's different channels. Advertising revenue grew only 3% domestically, but 10% internationally. Operating profit does seem to be going the wrong way. That particular line item dropped 18% year-on-year for the filmed entertainment division, and by a whopping 36% for the television segment. Paying for sports content drove expenses much higher. Too high, in my humble opinion.

The stock has held up well since the potential Disney news hit the air. The hang-up on this deal, supposedly, was that the two were apart on price. Fox does have something of value to sell. Disney, as always, would likely benefit from even greater content control, greater scale, and greater global exposure. The gem in this deal could be Hulu. As Disney works toward pulling its own content back from Netflix NFLX in 2019, and creating its own streaming service, among Fox's assets sits NFLX rival Hulu. By the way, Hulu posted a loss of $62 million for the quarter versus a loss of $39 million. A gem? Perhaps. I am not the expert. Hey, you guys remember DLJ Direct?

Chart of The Day: Fox

What quickly becomes apparent on the year-to-date daily chart of Twenty-First Century Fox, Inc. (FOXA) , is just how poor a year the stock was having. Even the boost provided by this Disney (DIS) speculation leaves the shares priced 5% below their July highs. Money Flow has been positive since mid-September, but all that did was stabilize the stock for a while -- and even that had failed by early November.

The stock is not technically overbought, even at the levels reached this week. Its recently depressing values are probably what provoked the timing of the Disney news in the first place, and why price was an issue for the Murdochs. My thought? You've likely seen all of the premium that you are going to see until another shoe drops. 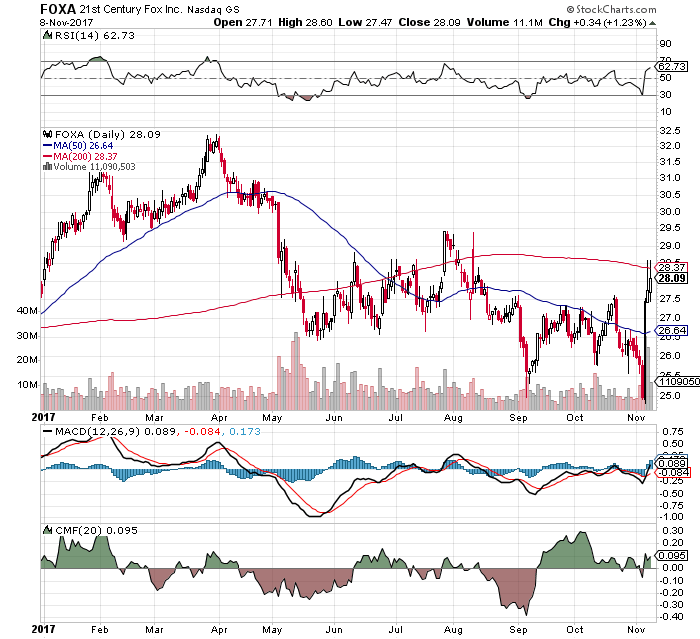 Cryptocurrency? Forget about it. The most important slice of Thursday night's Nvidia (NVDA) earnings will come from gaming. You will likely see declines in Proviz and OEM tonight. Gaming is where this firm, though great at everything, still butters its bread. The data center and autonomous driving will help.

Remember, this stock has run almost 100% this year. I have been pushing this name (and Lam Research (LRCX) , also up almost 100% year to date) on you all year. Do not be surprised if the fast money crowd heads for the highway when they see a reduction in blockchain mining revenue. Those of you who missed this name may get a point of entry if you're lucky over the next few days. If I'm lucky, you won't.

Get an email alert each time I write an article for Real Money. Click the "+Follow" next to my byline to this article.
TAGS: Investing | U.S. Equity | Consumer Discretionary | Consumer Staples | Industrials | Markets | Consumer | Earnings | Gaming | How-to | Mergers and Acquisitions | E-Commerce | Stocks