Retail is in focus today and Kohl's Corp. (KSS) is one of the names to watch. We last shopped at Kohl's toward the end of August. The stock price was weak in the first half of August and we wrote, "The short-term price action in KSS is still touch and go. KSS may again find buyers around $36, but in this current weak equity market environment there are no guarantees." Prices managed to recover and break above the early August highs only to stall out above $6 in late September. The price of KSS declined in October and into November.

On Thursday the price of Kohl's plunged to the downside but it is now rebounding on the day and volume/turnover is heavy. Let's see how this potential reversal looks on the charts and whether it can be sustained.

In this daily bar chart of KSS, below, can see that prices are below the 50-day moving average line and if we close higher on the day we will also be above the 200-day line. The On-Balance-Volume (OBV) line held steady in October even as prices decline. The Moving Average Convergence Divergence (MACD) oscillator is below the zero line but if prices rally it could quickly reverse higher.

In this weekly bar chart of KSS, below, we do not have Thursday's price action included but we can say that prices tested the rising 40-week moving average line. The weekly OBV line has weakened in the past two months but the overall pattern is neutral. The weekly MACD oscillator is above the zero line but the two moving averages that make up this indicator are close to crossing.

In this Point and Figure chart of KSS, below, we can see the sharp decline (column of red "O's"). So far the chart shows a serious test of the base and the future is up in the air. 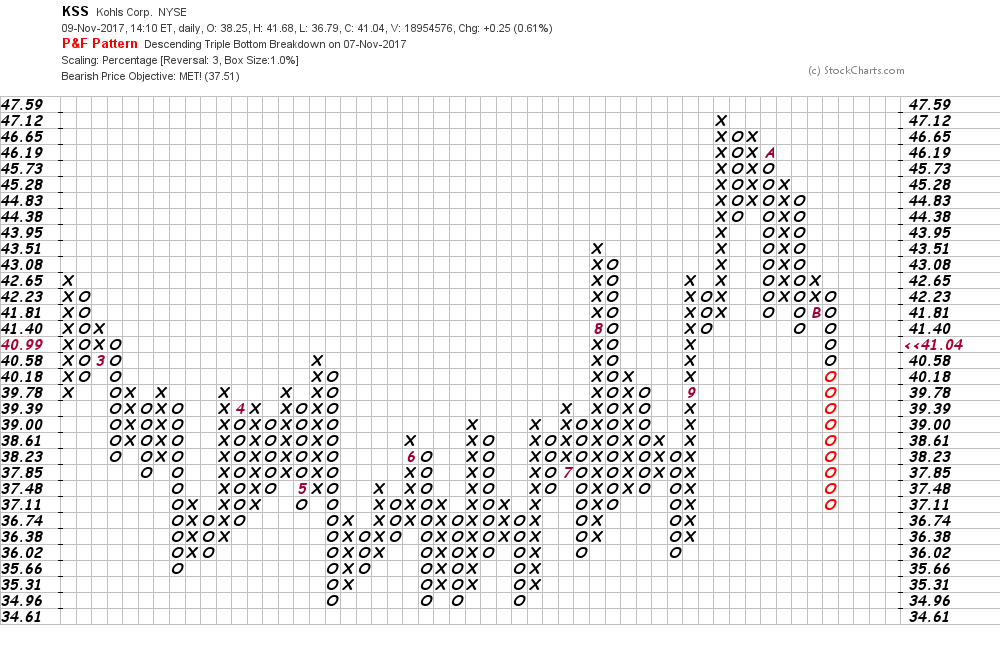 Bottom line: It will take a few days to find out and decide if today's down to up move will carry through to the upside or whether it fizzles and the decline continues.

Get an email alert each time I write an article for Real Money. Click the "+Follow" next to my byline to this article.
TAGS: Investing | U.S. Equity | Consumer Discretionary | Earnings | How-to