Twenty-First Century Fox Inc. (FOXA) has been in the news recently on talk that Disney (DIS)  is supposedly talking to the company about a merger of their entertainment assets and infrastructure. It is hard for me to assess what might be happening behind closed doors or at a quiet table or out on the golf course. I cannot be a fly on the wall, so I fall back to the charts and indicators.

Let's take a look at what was going on with prices and volume before this talk surfaced and see if we can glean anything.
In this daily bar chart of FOXA, below, we can see that prices were trending lower from late March until very recently. Prices were below the declining 50-day moving average line as well as the declining 200-day line. In a flash prices have rallied to close above the 50-day average and touch the underside of the 200-day line.

Two of our indicators show an interesting shift over the past few months. The On-Balance-Volume (OBV) line has gone up the past two months even as prices went sideways to lower -- interesting. Buyers were more aggressive over the past two months and with prices now higher than they have been since early September it means that all those purchases are at a profit. The trend-following Moving Average Convergence Divergence (MACD) oscillator gave a cover shorts buy signal in early September and diverged from the price action in early November.
In this weekly bar chart of FOXA, below, we can see two trends. First, there is a downtrend from late 2014 to early 2016. The second trend is sideways since late 2015 and dips to around $24 and below are bought. Rallies into the $30-$32+ area are sold. Prices now are testing the declining 40-week moving average line. The weekly OBV line has been declining since April and the MACD oscillator is in a bearish mode below the zero line.

In this Point and Figure chart of FOXA, below, we can see a potential upside price target being projected to $34.50. Two price points to watch will be $28.65, which will be the first "breakout" and then $29.52 is the second point to monitor. 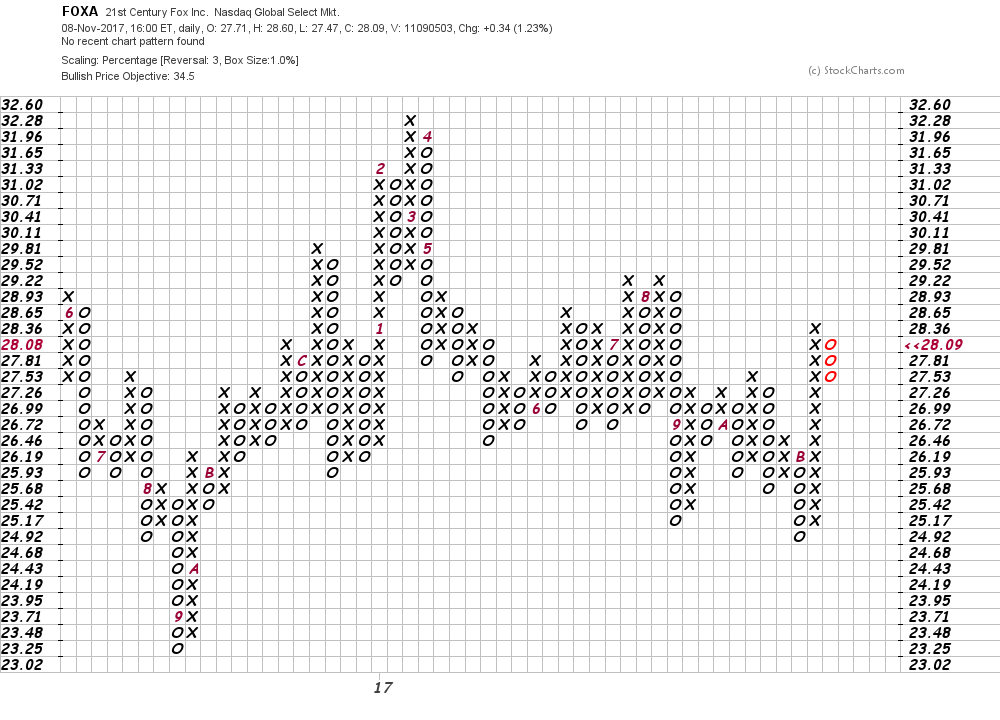 Bottom line: It is very hard, in my opinion, to trade "news" that is non-public. FOXA has made a "knee-jerk" rally and we could see further sharp moves, but they could be up and down.

Get an email alert each time I write an article for Real Money. Click the "+Follow" next to my byline to this article.
TAGS: Investing | U.S. Equity | Consumer Discretionary | Mergers and Acquisitions

This stock has been experiencing strong volatility post-earnings.

Only four of the 13 stocks in the 2020 Double Net Value Portfolio are up since its inception last December.

It is going to take successful vaccines and therapies and much lower unemployment to revive most of Walt Disney Co.'s businesses.

Tutor Perini, Beazer Homes and Alexion Pharmaceuticals all turned in solid results in the face of the pandemic.