When Disney (DIS) reports its fourth-quarter earnings on Thursday, much attention will be focused on whatever CEO Bob Iger says about ESPN, the most expensive channel for pay-TV operators to carry.

While Iger may not provide investors with a round subscriber number for ESPN (he rarely does), it's likely he'll offer some choice words on whether Nielsen was right to report that the popular sports network lost 3.1%, or about 621,000, subscribers in the month of October alone.

The apparent decline, a subject of a hot dispute between Disney and Nielsen, would fall in the higher range of a trend that's at least four years old. As the summer came to a close, total subscribers of ESPN had fallen under 90 million for the first time in more than 10 years, according to sources familiar with the tallies. 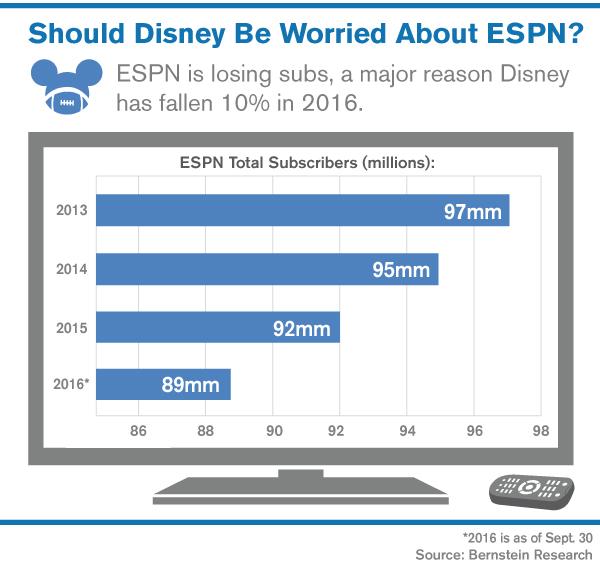 Of course, ESPN isn't the only network losing subscribers. The entire pay-TV universe has been shrinking since the first quarter of 2012 when the industry peaked at about 100 million. The erosion in customers is due, of course, to the ascendance of newfangled platforms and websites led by Netflix (NFLX) , Alphabet's (GOOGL) YouTube, Dish Networks' (DISH) SlingTV and even over-the-air antennae, which are becoming more popular as their quality has improved.

Alphabet is a holding in Jim Cramer's Action Alerts PLUS Charitable Trust Portfolio. Want to be alerted before Cramer buys or sells GOOGL? Learn more now.

But ESPN remains a bellwether for the pay-TV industry, so its subscriber total and overall ratings get outsized attention.

Weakness at ESPN is viewed as a harbinger for the entire business. And for good reason. ESPN, which is 80% owned by Disney, costs providers an average of $7.21 per customer per month to carry the network, according to media analyst firm SNL Kagan. That's the highest affiliate fee of any network. In second place, by a healthy distance, is Time Warner's (TWX) TNT at $1.82 per customer per month.

As for the reported 3.1% subscriber decline, it's not as if Iger and ESPN weren't prepared for it, said Brian Wieser, a media analyst at Pivotal Research Group, who estimated the network has been losing subscribers at a rate of 2% to 4% for the past three years. Despite losing customers, Wieser pointed out that Disney has been able to secure higher fees in exchange for giving pay-TV operators such as AT&T's (T) DirecTV and Dish Networks more flexibility to offer channel packages that didn't include ESPN.

"One should be mindful that ESPN will experience low-single-digit declines in subscriber levels but they'll also get high-single-digit price increases for every subscriber," Wieser said. "The pricing power they have still outpaces the subscriber losses."

Thus, while ESPN is losing subscribers, independent pay-TV analyst Bruce Leichtman argued that the decline is not nearly as significant as Nielsen's October numbers made it out to be.

The Durham, N.H., analyst said net subscriber totals for all pay-TV providers during any fourth quarter have never been in the red. The notion that ESPN lost nearly 630,000 subscribers in one month, he said, "is just such a glaring aberration that it appears to be a sore thumb. It didn't happen."

While subscriber losses and the impact on ESPN's business will be debated, one trend is indisputable: Ratings for NFL games are running well below those of 2015. ESPN carries Monday Night Football, historically one of the highest-rated shows on television. To be sure, lower ratings are partly due to comparison with the previous two seasons in which viewing hit record levels as fans tuned in for Peyton Manning's final season and Tom Brady's troubles with Deflategate.

Nonetheless, the combination of slipping ESPN subscribers combined with lower NFL ratings will "increase the risk of lighter advertising results in the fourth quarter across the networks and ESPN," Morgan Stanley media analyst Benjamin Swinburne said in an Oct. 31 report, in which he lowered his forecast for ESPN ad sales.

As for Thursday's results, it's important to note that Disney's fourth quarter of 2016 contained just 13 weeks compared with 14 a year ago, an 8% difference. Disney's Iger is certain to mention that, and provide some thoughts on Nielsen.

Get an email alert each time I write an article for Real Money. Click the "+Follow" next to my byline to this article.
TAGS: Investing | U.S. Equity | Consumer Discretionary | Telecom Services | Earnings | Entertainment | Stocks