"I would host a show where I take famous people out into the woods every week to find Bigfoot. I would do that. And you know what? We would find him in like a week." -- Rob Huebel

There are some folks out there who claim to have actually seen a Sasquatch. In Asia, mountain climbers have claimed to have encountered a similar creature, known as the Yeti. Any walk through the forest, no matter where located, almost always reveals a world full of beauty and wonder. This guy loves the forest. Staying on the beaten path, so that one might find their way back home, always leaves enough to the unknown that everything remains possible. Unfortunately, there are no forests in Washington, DC. There also, at this point, seems to be no "beaten" path to tax reform any time soon. How do we know this? That's precisely what the financial markets are telling us.

Seen the yield curve lately? Neither have bond traders. The two-year/10-year spread has collapsed over seven consecutive days of flattening to where it is this morning: 0.672%. That's something like a 10-year low, sports fans. Lower taxes would, in all likelihood, cause some inflation, thus traders would be selling bonds, pushing yields higher in preparation -- that is, if they believed. Want to see the banks rally from Tuesday's visit made by the "ugly stick"? Not with spreads like this.

How about those small caps? Anyone else notice that rude beat-down laid upon the Russel 2000 in Tuesday's "quiet session"? While all of the other indices flitted around the unchanged mark, traders were taking profits in small-cap names. Not a bad idea, after that particular index had run sideways for about a month. Still, if corporate tax reform were imminent, traders would not be counting dough just yet in the names most likely to benefit, and that on a day that saw the U.S. dollar test higher valuations. For those new to the game, a stronger U.S. dollar hurts larger firms that do a global business. Few small-caps do a significant percentage of their business beyond U.S. borders, thus making dollar valuation nearly irrelevant in this space.

Monster Under the Bed

For all of the political news and absolute nonsense that screams across our television screens and grabs our attention in the papers (Yes, I still read newspapers), there is still a monster hiding under the bed. That monster that few people still mention when speaking of market risk remains the realm of the geopolitical. Markets have seemingly discounted almost every incident that would have, in the past, have caused much greater consternation. There are, in reality, many types of geopolitical risk out there that markets seem to pretend aren't really all that much of a danger. The most dangerous of these, I still believe to be North Korea. Still a most advanced adversary from a capabilities point of view. Still controlled by a dangerous man. Still economically desperate.

News broke late on Tuesday that a new bill had made its way through the Senate Banking Committee which, if passed, would require the Treasury Department to sanction any financial institutions that do business with North Korea. This while the U.S. president visits South Korea, and makes his way to China. It would seem to the casual observer that under such a law, Chinese banks would come under U.S. scrutiny. Who else handles financial transactions for the rogue regime? What does North Korea have to sell? Coal, iron, and cheap labor. Yes, they actually export workers as if they were a commodity.

In recent weeks, the U.S. Treasury banned the Bank of Dandong from the U.S. financial system, and is thought to be taking a look at other banks as well. Treasury has already mentioned Mingzheng International Trading as a firm that acts as a front for North Korea's Foreign Trade Bank. Does this bill go anywhere? Do you think that fining European banks helped put the squeeze on Iran?

Where Am I Going With This?

Back to defense, of course. The space has been a favorite of mine going back to late 2016, at first simply because I considered that increased fiscal spending implemented under the Trump administration would land here. Now, it seems no matter who heads the U.S. government, this area has become an area of need more than one of increased comfort.

The White House made a request of congress this week. A supplemental budget request. Asked for are $4.0 billion for missile defense, $1.6 billion for the wall on the Mexican border, $1.2 billion for the administration's new strategy in Afghanistan, and $700 million to repair the two U.S. Navy ships that were involved in those fatal collisions last summer.

To understand how this impacts your investments, you must first understand what firms produce the type of weapons that have the capability to shoot down ballistic missiles, and where those weapons are deployed. The Midcourse Defense System is so named because what it does is intercept incoming missiles in mid-course. This system is stationed strategically at Fort Greely, Alaska. The intercept missiles themselves are manufactured by Boeing BA and Raytheon RTN.

Ever hear of THAAD? You should have, but if you did not, the acronym stands for Thermal High-Altitude Area Defense interceptors. These are currently deployed at U.S. bases throughout the Pacific, and are manufactured by Lockheed Martin. Raytheon also manufactures the Standard Nissile-3 Block IIA interceptors. Did you take a look at these three names yesterday?

Shazam! BA, LMT, and RTN were all up 2.1%, 3.2%, and 1.3% respectively on a day when the Dow Jones Industrial Average closed practically unchanged, the Industrial Sector SPDR ETF (XLI) closed up just a smidge, and even the broader Defense and Aerospace industry scores a gain of roughly 0.6% in aggregate. Smoke, meet fire.

Charts of The Day

I won't go into great detail on these three stocks at this time. I'll leave that for individual stock analysis, when you have less on your plate than you do when going through your pre-opening rituals. What I want you to notice about these three stocks is this: You can easily see where the institutional money has continued to flow into Boeing (BA) . Both Lockheed Martin (LMT) and Raytheon (RTN) took serious hits in late October, and now seem to be recovering. Boeing has a broader business than both LMT and RTN. That much seems obvious.

Now, take a look at the moving average convergence divergence (MACD)s. In all three cases, the 12-day exponential moving average (EMA) has curled upward toward the 26-day EMA. The Boeing chart would be the only one of the three sporting a nine-day EMA well above the zero-bound.

Relative strength has gained momentum on all three charts, as well. What does all of the technical mumbo-jumbo mean to me? It simply looks like all three go higher in the short term, particularly if you were to get that MACD bullish crossover that now appears almost imminent across all three charts. 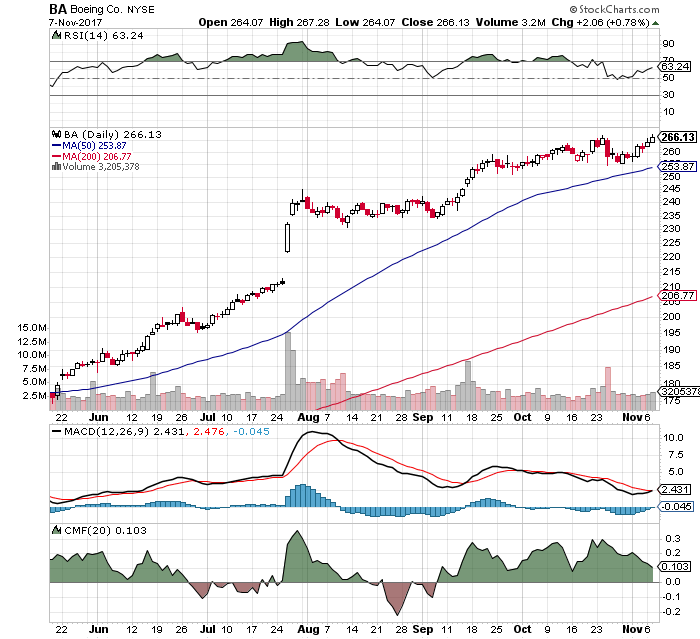 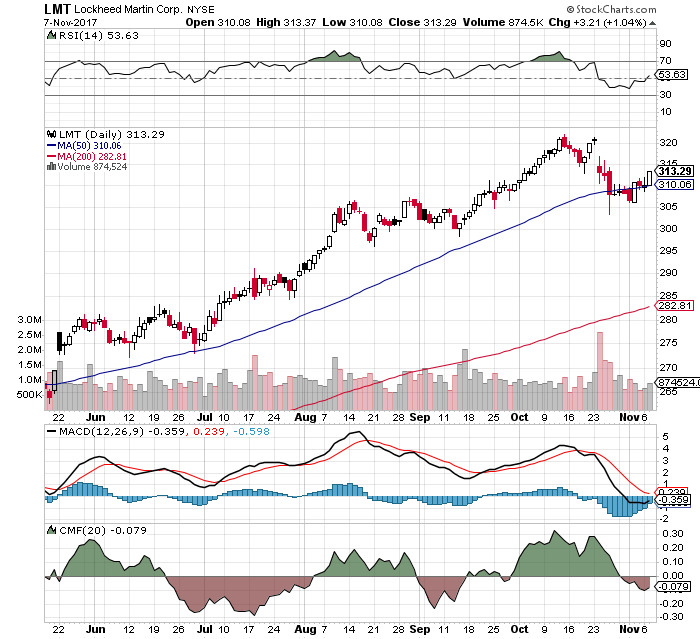 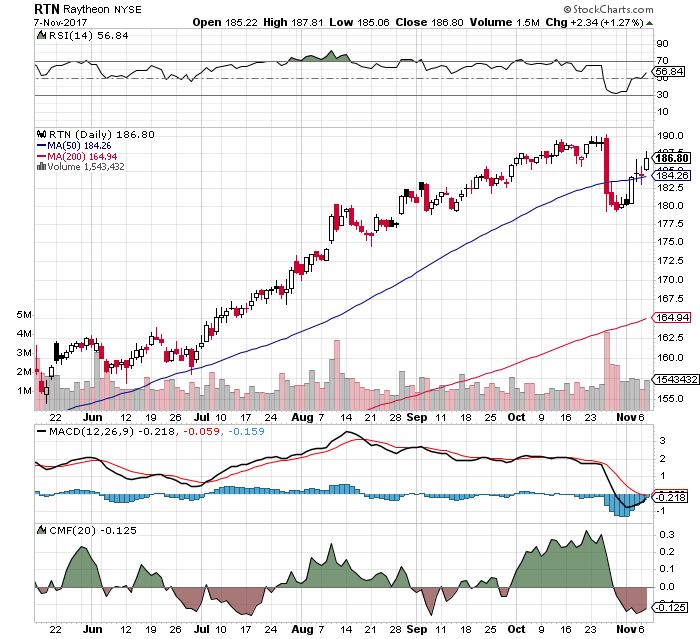 Am I staying long RTN? Yes. Did I miss my chance to buy back my LMT at lower prices because I got a little greedy? Likely. Do I wish I got myself long BA many months ago? Of course.

Get an email alert each time I write an article for Real Money. Click the "+Follow" next to my byline to this article.
TAGS: Fixed income | Investing | Rates and Bonds | Markets | Treasury Bonds | Transportation | Financial Services | Industrials | Economy | How-to | Politics | Risk Management | Stocks