J.B. Hunt Transportation Services Inc. (JBHT) has been trading in a tighter and tighter range the past five weeks, making what could be an equilateral triangle formation.

This chart pattern or formation is the most difficult of the three triangle patterns (ascending, descending, and equilateral) to handicap. I never got my CDL, but I have been driving since I was 10, so I think I am ready to handle the charts of JBHT. Let's take a look.

In this daily bar chart of JBHT, below, we can see that the price of JBHT has been testing the rising 50-day moving average line in October and it is likely to test the line again this month. There is a bullish golden cross in early September, when the 50-day line crossed above the 200-day line, but now the 50-day line looks extended above the slower 200-day line.

The On-Balance-Volume (OBV) line made a high at the beginning of October and has weakened slightly since. A soft or declining OBV line is a sign that traders and investors have shifted to a more aggressive selling stance. The trend-following Moving Average Convergence Divergence (MACD) oscillator gave a take-profits sell signal in early October and is still in a bearish mode.

In this weekly bar chart of JBHT, below, we can see that prices are above the rising 40-week moving average line. The weekly OBV line has moved up from a May low, but it has stalled in the past two months at a level below its February zenith.

The moving auverage convergence divergence (MACD) oscillator is above the zero line, but it has begun to narrow towards a possible or potential take profits sell signal.

In this Point and Figure chart of JBHT, below, we can see just a small top pattern since September (the "9" on the chart). The pattern early in the year was much bigger and the decline, when it happened, was deep. Support looks like it starts around $94-$90. 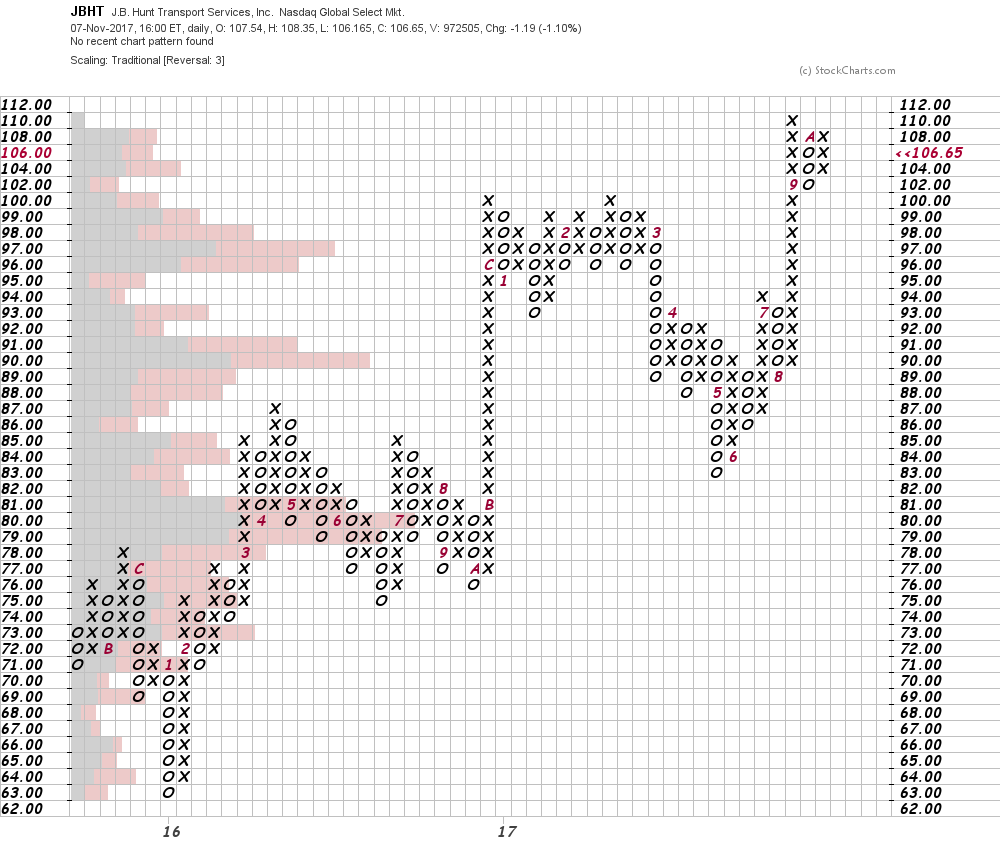 Bottom line: equilateral triangle patterns can break out in either direction, even though they are seen in an uptrend. A close below $104 and then $101 will weaken the pattern, while a close above $110 will strengthen it.

Get an email alert each time I write an article for Real Money. Click the "+Follow" next to my byline to this article.
TAGS: Investing | U.S. Equity | Transportation | How-to | Stocks

The speculative runup in FCEL seems to be over. Approach with caution.

Boeing's Charts May Lose Some Altitude

BA may be a buy on this weakness. The charts show some pressure in the short-term, but longer-term, the skies are clearing.