Let's check out the charts and do a pre-flight check in. Keep your seat belts on, low and tight.

In this daily bar chart of ALK, below, we can see that prices have been working lower and lower since an early March peak around $100. With prices trading below $65 now, considerable damage has been done. A bearish death cross can be seen in mid-August as the 50-day average line fell below the 200-day line.

Prices are still below the declining 50-day and the declining 200-day averages. The On-Balance-Volume (OBV) line peaked at the end of March and has declined since. A falling OBV line happens when there is more volume of shares traded when a stock closes lower. Trading more on a down day is a sign that traders are anxious sellers. In the bottom panel is the 12-day momentum study, and there has not been a slowing of the decline in recent months telling us that so far buyers are not showing up on a scale down.

In this weekly bar chart of ALK, below, going back three years, we can see that prices are below the declining 40-week moving average line. Prices have fallen to be in position to test the June 2016 lows in the $60-$55 area.

The weekly OBV line peaked in February, and the trend-following Moving Average Convergence Divergence (MACD) oscillator has been bearish since early August.

In this Point and Figure chart of ALK, below, we can see a large distribution top formation, with a possible longer-term bearish price target of $44. 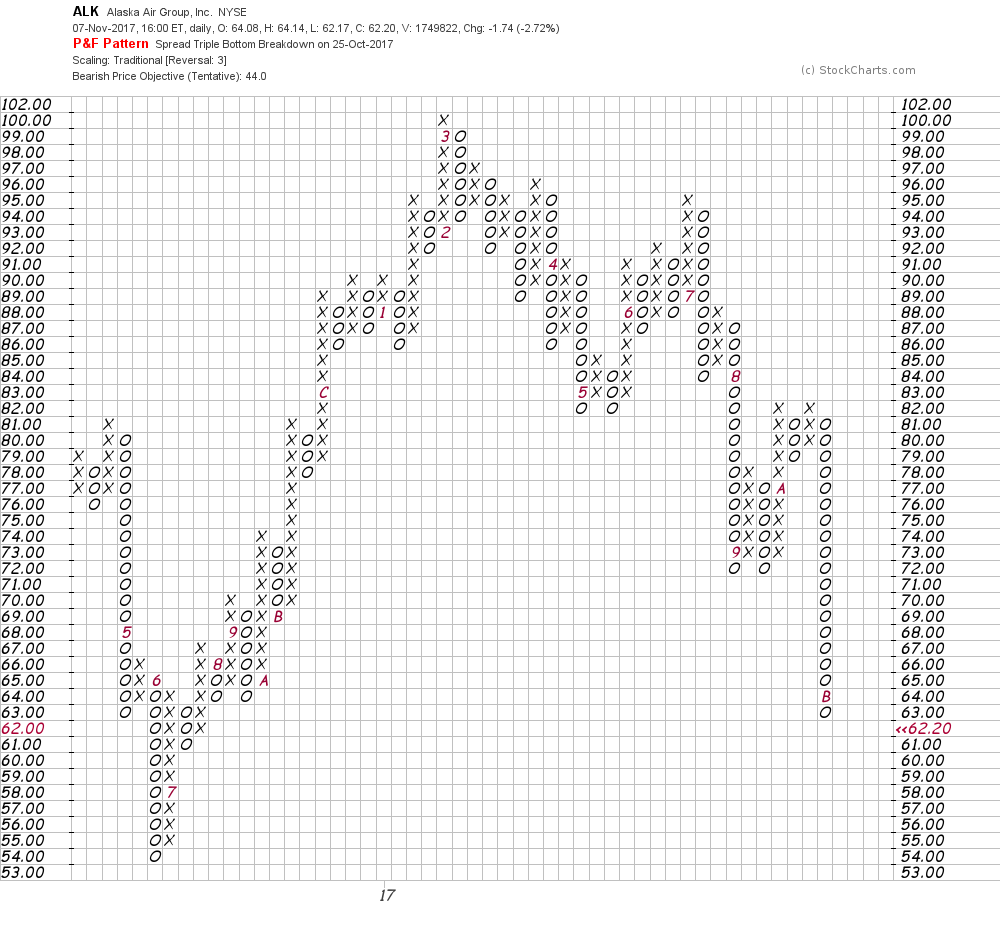 Bottom line: ALK has been in a downtrend for eight months, and while we could see a near-term oversold bounce, we do not see a bottom yet. Do not go out on the tarmac to buy ALK. Wait for signs that someone smarter than us is buying -- a rising OBV line and the breaking of a downtrend line or a moving average.

Get an email alert each time I write an article for Real Money. Click the "+Follow" next to my byline to this article.
TAGS: Investing | U.S. Equity | Transportation | Industrials | How-to | Stocks

Plug Power Fails to Show Positive Indicators Ahead of Earnings

The stock price of the maker of hydrogen fuel cell systems has remained depressed for a while now.