"The secret of a happy marriage remains a secret." -- Henny Youngman

Small World After All

In the attempt to publish a morning note relevant to market participants and professional traders alike, sometimes I sit at my desk for a long time and look out my office window. Sometimes it comes to me right away. Other times, I stare out into the darkness of night for almost an hour before I realize where traders' focus, or at least their attention, should be.

This morning was easier. Everyone and their best pal either has a stake in Disney (DIS) , or at least has peripheral interest in the name. Who has not at least bought a few shares for a child? Especially back when they used to send you that beautiful certificate. Well, kids, the Walt Disney Company, long a powerhouse in the entertainment industry, has been in the most severe of fights, just to defend the borders of their Magic Kingdom. As progressing technology has offered consumers differing pathways of information delivery, many consumers have evolved the way they choose to receive that information. This has made traditional television much less of a growth business, not to mention what it has done to something simple like the idea of "dinner and a movie". I would be a lousy "single" in 2017.

As the world morphs into what comes next, for these dealers of entertainment, content becomes king. Cord cutters have made the cable bundle something that the cable companies have been left hanging onto, and has yet to become a certain growth area for streaming services. For Cable TV in general, and for Disney more specifically, ESPN has been what many use as a litmus test for industry health. The leader in sports television has been Disney's television centerpiece. The firm is moving this business toward the net. It is not there yet. The TV business line also includes the Disney Channel, the ABC broadcast network, and a myriad of smaller cable channels. Their television business reported an 11% decline in profit in the third quarter earnings statement released this past August. The firm will put its fourth-quarter numbers to the tape this Thursday evening.

As most of you likely know, Disney has already announced that it will forego what it would have received as payment from Netflix (NFLX) and, instead of selling streaming rights to its own content, preserve that content for the expected launch of its own streaming service. Apparently, 21st Century Fox (FOXA) has also been impacted by this changing environment. Rumor on the street is that Fox is interested in selling parts of the firm dealing in content, leaving only the core businesses of broadcasting news and sports. News broke on Monday that Fox had had preliminary talks with Disney on having the mouse acquire that content. These talks had cooled by the time any news had broken. Perhaps the asking price was a bit much. Perhaps this is simple negotiation.

They do say that where there is smoke, there is fire. FOXA shot up almost 10% on this news, while the shares of DIS saw a simultaneous 2% pop that landed them well above par ($100). Supposedly included in a deal, were it to happen, would be the FX network, several smaller channels, and a significant level of exposure in both Europe and India. Disney could use the content and the international boost as a way to bolster its television business, as well as enhance any streaming service likely to compete for millennial viewers come the year 2019.

From Disney's point of view, the firm has already been more aggressive than many might realize. In recent years, Disney has acquired Lucasfilm, Marvel Studios, and Pixar -- all of whom have made significant contributions to the firm. From the Fox point of view, Disney is not the only fish in the sea. Maybe Verizon VZ would interested? Are they desperate enough? Maybe Amazon AMZN? You already know that Amazon Prime has tried to make inroads into the streaming business. This is not a crazy idea at all.

What Have I Done?

I sold 40% of my long equity position in DIS on this pop, and covered a like amount of my options related hedge. I intend to remain long the name for the time being, in order to participate in this developing story. As for NFLX, I am also long that name, though it represents a much smaller slice of my book. There are technical levels for this particular name that I am keeping a close eye on. The position is un-hedged. I came in flat FOXA, and am unlikely to chase that name.

Any of you kids bravely play Priceline (PCLN) earnings last night? Whooo Doggie. That one's gonna leave a mark. There is good news. I think. The firm reported an adjusted EPS of $35.22 a share versus expectations of $34.25. Huzzah. Revenue for the quarter grew 20.1% to $4.43 billion. That also beat expectations, by 90 million clams. Huzzah. Travel bookings grew 18%. That beat guidance. Lowered guidance. The fourth quarter gets uglier. The firm predicts that gross travel bookings will grow 9.5% to 14.5% for the fourth quarter. That's awesome, right?

Not if the street is used to growth above 20%. Not if a higher level of growth had already been priced in. In overnight trade, the stock is off by more than $200. $200! That's more than 10%, gang. I have some ideas. If you're wearing these shares without any kind of hedge, nothing will make you happy today. But if you trade this name, hopefully you knew the risks.

Chart of The Day Netflix

Taking a look at Netflix (NFLX) , we choose a chart that dates back to July 2016, as that is when the last significant change in trend occurred. I have skin in the game here, so this is real analysis by someone who gives a darn, in case that matters to you. Obviously, despite the fact that Disney intends to pull its content in 2019, the stock has not been negatively impacted in a significant way.

That said, it is with an eye toward ringing the register that I look at this one, despite its recent crushing of expectations for both domestic and global additions. First off, we look at relative strength. It's healthy, but not uncomfortably so. Money Flow? Again, positive. It has shown some weakening, but not enough to get the small investor nervous, in my opinion.

The moving average convergence divergence (MACD) looks interesting. See that 12-day exponential moving average (EMA)? The upward curl looks like it could be on the verge of sending a short-term bullish signal, with a nine-day EMA close enough to zero. I like that as a trader. 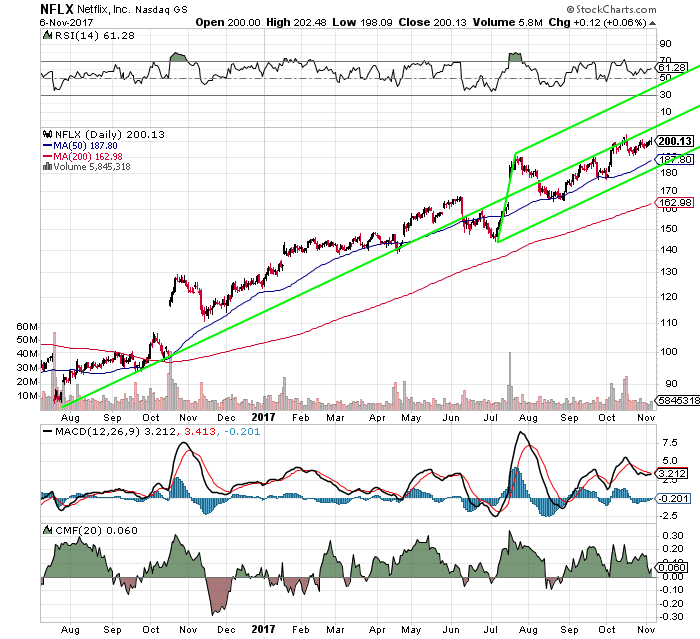 Once we super-impose the pitchfork, you can see that the central trendline has offered resistance for several months, while not the lower trendline, but the 50-day simple moving average has been valid support for just about as long. Do I think it's time to get out of this name? No. Am I sure? No.

This is where I care:

Bonus Chart of The Day

To be sure, gang, I have no position in Priceline (PCLN) . What that means is simply that on this name, my opinions are likely as worthless as every other talking head that crosses your path in the realm of financial media. This is just my attempt to aid the home-gamers who may find themselves in a jam this morning. I know there is little that will ease your nerves this morning.

What I see here is a stock that trades in obedience to its Fibonacci levels, particularly 61.8% Fib retracements. Take a look at what I see. 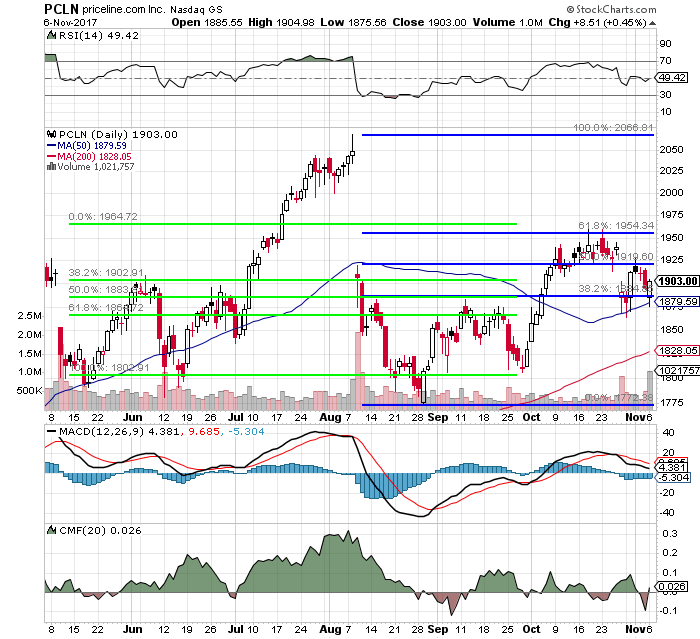 What does this mean to me? It means that the algorithms that are running this stock up and down are written by folks who understand this, possibly making the stock more predictable. How can this help?

If you're in it to win it, and that might be a tall order depending on one's tolerance for risk, you might want to start a third Fib model with these October highs, and run them through the eventual support level found by PCLN. We could see that level today. We should see it by Thursday. Can you expect a 61.8% bounce from that spot? If history repeats itself. Again, I have no stake in this name. I would not be opposed to initiating a small un-hedged long once I am comfortable with the idea that support has been established.

Get an email alert each time I write an article for Real Money. Click the "+Follow" next to my byline to this article.
TAGS: Investing | U.S. Equity | Industrials | Technology | Consumer Discretionary | Markets | Economy | How-to | Gaming | Mergers and Acquisitions | Options | Stocks