Western Digital Corp  (WDC) has been stuck in a sideways trading range since April and our favorite indicators could tilt upwards or downwards in the days and weeks ahead. In this roaring bull market, it is a little unusual for a stock to be confined to a $10 range for so long. Let's review the charts and indicators on WDC to see how we might want to position the eventual breakout.

In this daily bar chart of WDC, below, we can see that prices are trading above and below the nearly flat 50-day moving average line. Prices are still above the rising 200-day line. The On-Balance-Volume (OBV) line was also in a sideways pattern from April, but it has weakened over the last two months. The trend-following Moving Average Convergence Divergence (MACD) oscillator spent much of its time above the zero line -- until August, since which time it has been on the defense more.

In this weekly bar chart of WDC, below, we have a mixed set of indicators. Prices are above the rising 40-week moving average line and the line has been tested a number of times over the past three months. The weekly OBV line has been neutral since April, but it has also dipped a little in the past two months. The MACD oscillator has been in a bearish mode since May.

In this Point and Figure chart of WDC, below, we can see that a decline to break $84.75 would be bearish and that a rally to $91.77 would be an upside breakout. An upside breakout on WDC could open the way to a longer-term rally to a tentative price target of $100.24. 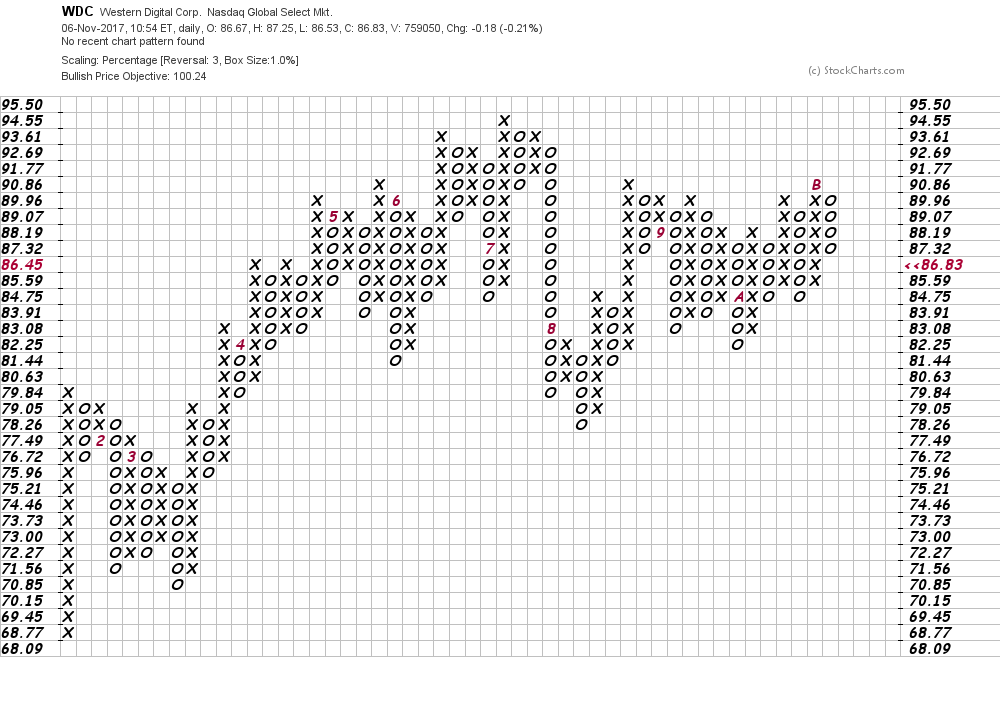 Bottom line: If you are bullish on WDC, I would look to buy strength above $91 and $95 but if you think WDC is vulnerable I would wait for a close below $80 before taking action.