"Neither science, nor the politics in power, nor the mass media, nor business, nor the law nor even the military are in a position to define or control risks rationally." --Ulrich Beck

A series of arrests spread across Saudi Arabia on Saturday, targeting royalty and influential cabinet ministers. This broad crackdown against alleged corruption would appear, at least at the surface, to be coordinated in such a way as to consolidate power at the top. To even try to begin to understand what is taking place in this nation, there are key points that first must sink in. One is the reigning monarch. King Salman is now thought to be in the later stages of that reign. Many expect that the king will abdicate his throne sometime later this year, or early next year. The heir apparent is Crown Prince Mohammed bin Salman. This prince is already the head of oil affairs for the nation.

Saudi Arabia is the largest exporter, and second largest producer of crude on this planet. The Saudis also have the most spare production capacity of any OPEC nation. The big story here, from a markets perspective, will be in the oil space and the development of the Saudi economy. This would include the much-hyped potential IPO for Saudi Aramco. Interestingly, the crown prince is the one who came up with the Vision 2030 plan, which is a plan to create a Saudi economy less reliant upon selling oil, and more so on the non-energy private sector. Why is that so interesting? Maybe because Prince Al-Waleed bin Talal is the name caught up in these arrests that would be most familiar to Western investors. For those having some trouble keeping track, Al-Waleed bin Talal is the prince that often appears on U.S. financial television. He has been a well-known investor in such firms as Action Alerts PLUS charity portfolio holdings Citigroup (C) and Apple (AAPL) , as well as General Motors (GM) and Twitter (TWTR) .

I can tell you from first-hand experience that the prince has visited the trading floor at the New York Stock Exchange several times over the years, and it was not really all that surprising to see him speaking to exchange officials nearby while one worked. So, risk will swing in both directions over the next few, days, weeks, and months. What the investor must now ask him or herself regarding oil, regarding Saudi Aramco, and regarding well- known corporations that have been linked to Prince Al-Waleed bin Talal is twofold: What are the political, as well as the reputational risks to these investments? You do not have to figure a lot out. This is not complicated. These are the two things that one must now worry about if already in these spaces, and if looking to score when opportunity knocks. I am in there with you. If you read me often, then you know that I come in long both AAPL and C, as well as some energy names. Everyone loves an irrational selloff if you get one. Knowing where to price your poison, or simply take a pass is the trick.

First off, do not expect any change in Saudi oil policies. Three years of depressed market prices for crude have left the Saudi Arabian economy in a state of stagnant growth. It is Crown Prince Mohammed who spearheaded OPEC's plan to freeze production levels as well as coordinate with Russia and Iran. I would be very surprised indeed if we did not see an extension of this strategy announced when most of the major oil producers meet later this month (Nov. 30). This prince needs to see further rebalancing of oil markets in order to boost possible valuations for the Saudi Aramco deal.

This deal, where the state is expected to float 5% of the firm, has been referred to as the biggest IPO in history, and is central to the prince's economic agenda. Some more hopeful analysts suggest that the firm in its entirety may be worth $2.0 trillion. The recent moves by the government, if anything, would add short-term value to the oil trade, as uncertainty increases. It would seem likely to this casual observer that the crown prince will be looking for ways to solidify prices for Brent crude above the recently attained $60 a barrel level.

We all know how much traders and investors love uncertainty. As oil markets perhaps enjoy a risk premium in the wake of these moves, will stocks suffer as a negative consequence? Not that you can make an apples-to-apples comparison here, but Saudi stocks did decline broadly in Sunday and Monday trade. It was far worse for Prince Al-Waleed bin Talal's firm, Kingdom Holding. This stock fell nearly 5% on Monday after dropping 8% on Sunday. Does that kind off selloff extend itself to the prince's known U.S. holdings?

I don't see a fundamental reason for such a selloff. Business should go on as usual for these companies. That said, even though the prince's holdings themselves are not likely to hit the markets in a fire sale, investors are up big in these stocks for the year, and up rather dramatically in stocks like AAPL and TWTR very recently. It would not surprise me at all to see some uncertain investors take profits in places where they are up big. I would not even consider them weak or panicky for doing so. For some, this could simply be a matter of personal discipline.

I will, however, not be selling my shares today. I will watch these stocks closely. If I see what I think are un-earned selloffs in what I consider to be the best value in banking, or the world's greatest consumer electronics company, I would be more likely to add than to cut. That said, if markets seem jittery, you may just see inflated premiums early this week for options related to these equities. You all know how much I love raising revenue. Just know where you're OK adding to these names, and see if morning prices for these put options make sense. Risky? Yes. Know your tolerance for risk.

Charts of the Day (Citigroup)

I really just placed this first chart here in order to illustrate how deep and lengthy the overall trend has been for Citigroup. There have been stutter steps, and some sideways movements that lasted for weeks at a time, but the positive momentum here goes back to the start of 2016, well before the election or the inauguration.

The reasons for which I have liked C for some time now are largely fundamental. Yes, I know that Societe Generale downgraded these guys fairly recently. I am still looking at a stock trading 12 times next year's earnings in an industry likely to benefit from the potential of a rising rate environment, with a bounty of international exposure to boot. 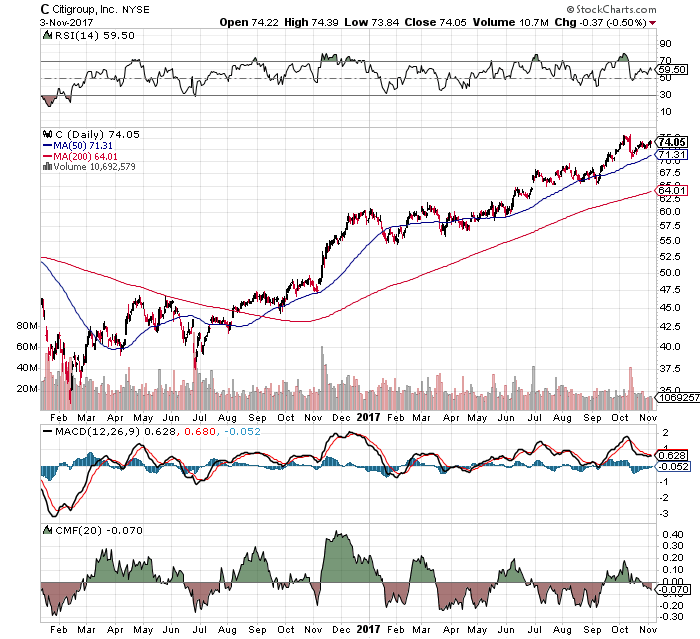 OK, let's take a look under the hood, and see what a more relevant chart can tell us.

You can see on this nine-month daily chart that the stock has gone sideways within a defined range since that earnings release in early October. Currently, the lower tine of the Pitchfork model lines up almost perfectly with the 50-day simple moving average. This is where you better find some legit support, if there is pressure on this name on Monday. 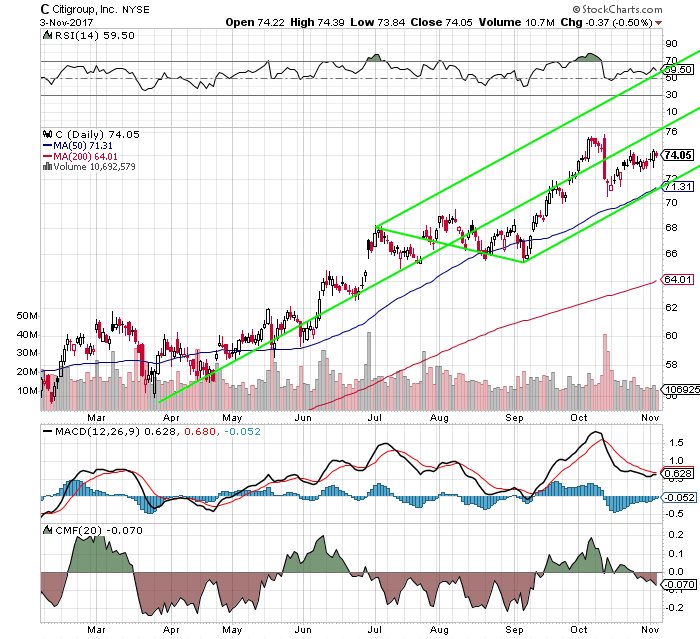 A break here allows for movement as low as $69. The central tine and the recent highs both suggest resistance at $76. The same model also suggests an $80 price target. In my opinion, that is realistic, and I do not yet see a more aggressive level higher than that.

In the stock's favor would be a moving average convergence divergence (MACD) that appears to be about to experience a bullish crossover. Witness the 12-day exponential moving average.

Monday morning's opening will impact that upward curl, and probably not in a good way. Money flow has turned negative over the last week or so. If you are invested, you need to keep an eye on this. My panic point for the name is $65.90.

Get an email alert each time I write an article for Real Money. Click the "+Follow" next to my byline to this article.
TAGS: Investing | U.S. Equity | Regulation | Markets | Financial Services | Technology | Emerging Markets | Corporate Governance | Economy | How-to | Politics | Stocks