This commentary is an excerpt from the Growth Seeker Weekly Roundup. Click here to learn more about this dynamic portfolio and market information service.

Everywhere you look, investors are shifting into hunker-down, risk-off positions as the level of uncertainty around the world rises. From an increasingly uncertain U.S. presidential election, to the U.K. high court's Brexit decision, to Italy's upcoming election we see rising instability, let alone the insanity that the Cubs finally won the World Series, ending the longest 108-year drought in history!

The shrinking spread in the polls between Hillary Clinton and Donald Trump just a week before the election has sent tremors through the financial markets as investors have been forced to rethink their level of confidence in a Clinton victory, and markets abhor uncertainty. According to PredictIT, the likelihood of a Trump win has increased two-fold over the past week. According to BetFair, his odds are up to 27% from 14.5% just two weeks ago and the latest Washington Post/ABC poll gives Clinton just a three-point lead versus a nine-point lead in mid-October. The Iowa Electronics Markets show Trump up to a 40% change from 10% prior to the FBI reopening Clinton's email probe -- pretty dramatic stuff.

The real problem is that after Tuesday, things may be far from settled.

It is conceivable that third party candidate(s) could win sufficient electoral votes to leave neither Clinton nor Trump with the needed 270, which would then put the election into the House of Representatives. If that occurs, we wouldn't count on a smooth process to say the least, which means uncertainty would continue. If either Clinton or Trump win, there is a reasonable likelihood that the loser refuses to concede and we will be in for an ugly battle. As you likely recall, the last time we had a contested election result, in 2000, the markets weren't exactly appreciative. It is also likely that we will be hearing reports of election fraud from either side and reports of foreign interference.

Then there are all the insane things that could happen over the coming days that we can't even imagine today as this election has been full of things we could never have imagined.

None of these scenarios make for the kind of stability that the markets prefer and we are already looking at a market that is richly priced and has been trading sideways with the trading band getting ever tighter. When we see a trading band tighten like this, it tends to break out with some gusto and all this instability today points to more downside risk to be had than upside potential.

So what is working? Recently life insurance companies have been benefiting from rising interest rate expectations, with the Dow Jones U.S. Life Insurance Index nearing a 2016 high, with several individual stocks already hitting highs such as Lincoln National (LNC) which is at its highest level since last December, and Prudential Financial (PRU) , which has exceeded its late 2015 high. We'd caution that this move is based on expectations, and a move by the Fed isn't exactly a guarantee.

In fact, there was a notable shift in Wednesday's release from the Fed. In September the Fed stated, "Household spending and business investment have been increasing at solid rates in recent months." Contrast that with Wednesday's statement that household spending "has been rising moderately, but business investment has remained soft." Hmmm, that is a lot less hawkish than one would expect if a hike in December was imminent. Fed fund rate futures are pricing in a roughly 80% chance for a hike, but this kind of language gives us pause. In either event, most of the hawkish voting members of the FOMC roll off in 2017, and their replacements will leave us with one of the most dovish rosters of all time, so even if we do get a rate hike, it is likely to be one and done.

Thursday U.S. weekly jobless claims came in above expectations at 265,000 versus expectations for 258,000. On Friday job growth in the US came in at 161,000 jobs versus expectations for 173,000, but September was revised upward to 191,000 from an initial reading of 156,000. These monthly numbers can be rather volatile, so we prefer to look at a longer-term picture. From that perspective, the 12-month moving average fell below 200,000 in October for the first time since March 2014 and has been on a downward trend since peaking in February 2015. 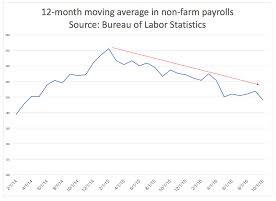 Not quite the rosy picture many are painting is it?

If we look at average weekly earnings in this same jobs report, we see that they were up 2.5% in October from a year ago, which is pretty much what we've been seeing for quite some time, so nothing to get overly excited about there. We prefer weekly to hourly as it is a better reflection of what people are actually taking home, given folks could be working just 10 hours a week. You may have read some gushing reports concerning the 2.8% rise in hourly earnings for all employees, but those that got all excited here failed to do their homework.

That gain is for all employees, but for private-sector production and non-supervisory employees, which represents about 80% of the entire workforce, the gain for hourly was only 2.5%. And when looking at a weekly basis that group gained only 2.1%, which paints a very different picture in which only 20% of the work force enjoyed those larger gains.

Taking a look at data from the U.S. Treasury, we see that tax receipts last quarter were down 4% year-over-year. For the past five months, the increase in payroll withholding receipts has barely kept up with inflation -- again not exactly a booming employment situation.

Bottom Line: The level of uncertainty both here and abroad has accelerated and the economic data, while not painting a picture of imminent decline, remains weak. Best case domestically we are in for four more years of political gridlock and while gridlock from 2012 to today saw the S&P 500 rise around 50%, the trailing PE ratio back then was 15x, not today's nearly 20x.

Get an email alert each time I write an article for Real Money. Click the "+Follow" next to my byline to this article.
TAGS: Financial Services | Investing | Economic Data | Economy | Politics | Stocks

The Ohio-based bank saw its shares slide last Friday after it posted fourth-quarter results though it already was flashing a couple bearish signals.