It never ceases to amaze me how fast we humans can move from being lovers to haters of almost anything. It's our nature. We live in a world of cycles (lunar, seasonal, life, tides, to name a few), so our DNA is tuned for changes, which our moods about things reflect.

Few places manifest our mood swings from love to hate better than this weekly bar chart of Tesla. Note that since early 2013 our herd of humans moved during October of that year to loving and then to hating by November, then loving by February 2014, hating by May, loving by September, hating by April 2015, loving into July, etc. until we get to our current mood of hatred. 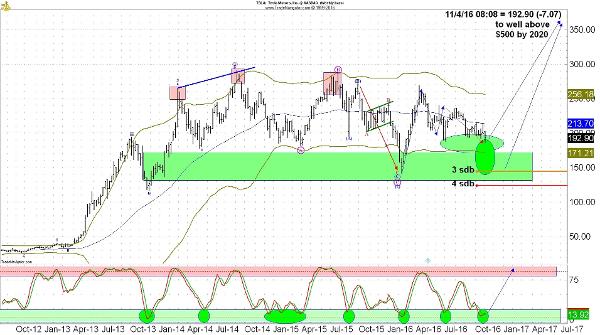 This is interesting as most anyone, looking backwards, would be hard pressed to name the reason of any of our love affairs, or hate tantrums. This is helpful going forward, as it teaches that the reasons are irrelevant; it's the cycle that matters! Armed with this realization, all we need to do is identify when our love is about to wane and our hatred is about to lessen. Sadly, we humans aren't equipped with a very good barometer of emotional extremes, especially when either extreme of love or hate is approached.

That's why we built the decision support engine (DSE). Its algorithms are tuned to search for the footprints of mood extremes, regardless of the news of the day, week or month.

Sending shares of Tesla (TSLA) through the DSE's analysis, we can see some glaring reasons that the herd's hatred is about to cycle again, and the share price should rise for a while in a new love affair.

Firstly, note the stochastics are at the same hatred extremes that have brought in every low since 2012. These are weekly bars, telling us the coming rise should last five to eight weeks. History shows it has never, ever, been a good idea to sell TSLA when at this oversold condition, with stochastics coming up and out of the green zone near the 10% threshold.

Secondly, like every other low in the past four years, the pattern of the decline into the lows has reflected an overlapping pattern choppiness, rather than an impulsive pattern, which the rallies have generally displayed. This is evidence that the entire movement since the September 2015 peak has been a correction of the monster rise that the company's shares experienced from the $30's price zone to the $290's all-time highs. Once complete, this corrective process is expected to thrust to all-time highs, regardless of whether this $180 (plus or minus $10) zone holds, or if $135 (plus or minus $15) is seen, in a retest of this year's spike low.

Thirdly, the olive/gold line crossing $171 now is the lower two standard deviation band, which controls 95% of normality. The orange and red lines, crossing $145 and $123, are the three and four bands, which control 99.7% and 99.9%, respectively, of normality. The explosive rise off the February low shows how rare it is for those statistical extremes to be seen, and impossible it is for prices to remain in their vicinity. So, at worst, $170 should now be tested, which is also the lower end of the $180 (plus or minus $10) zone.

Next, this merger the company is involved in with SolarCity (SCTY)  is being used to justify the herd's hatred, when the herd has almost no understanding of what the deal is all about. Few have been able to stay current with Elon Musk's vision of Tesla in the past decade, let alone able to envision the future with him. So, to believe those same analysts can now see what he does in the merger is lunacy. Regardless, though, this is news and noise, and not the cycle of mood swing itself, which is at the point of a cyclic extreme and due to inflect into a new mood, namely, love.

The coming months should see shares of TSLA rise toward $250, where the next decision point arrives. When there, our DSE will probability-rank the outcomes, given empirical data only, and inform us if the love affair is about to end, again, or if there is a longer lasting relationship between the herd and the shares developing. For now, selling is not indicated, as it was at the prior stochastic moves into the pink zone and buying is!

Stay tuned to the DSE for clarity.

Get an email alert each time I write an article for Real Money. Click the "+Follow" next to my byline to this article.
TAGS: Investing | U.S. Equity | Consumer Discretionary | Markets