Occidental Petroleum Corp. (OXY) has rallied strongly today. The technical conditions have improved a lot in the past two months and now we are seeing the result -- a strong rally to a new high for the move up. Let's check out the charts and indicators to see where OXY may be going and how we can participate.

The On-Balance-Volume (OBV) line made a low in early July and has been moving up since then, which signals more aggressive buying and accumulation. The Moving Average Convergence Divergence (MACD) oscillator is declining but looks poised for a bullish crossover to the upside.

In this weekly bar chart of OXY, below, we can see that prices have held above the flattening 40-week moving average line the past month. The weekly OBV line has turned up with the price action and the MACD oscillator is crossing above the zero line for an outright go long signal on this timeframe.

In this Point and Figure chart of OXY, below, we have a nearby price target of $70 for OXY. There is some chart resistance from $68 up to $74, but a move above $74 would be a significant upside breakout and warrant much higher price targets. 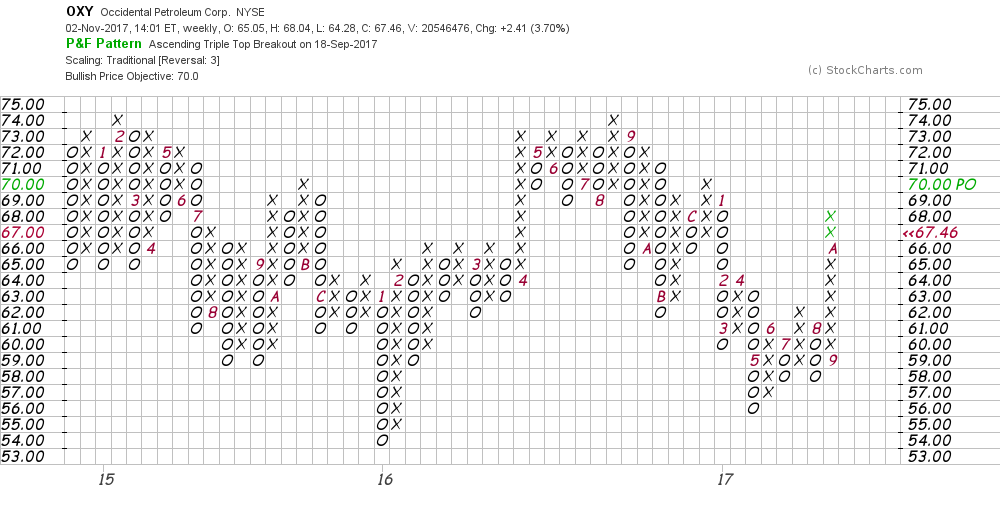 Bottom line: OXY made a seven-month saucer-like bottom pattern on the daily bar chart. Along with a number of bullish technical signals, this gives me a positive outlook. Add to longs or go long OXY at current levels risking below $63. First price target is $70.