"We judge economics by what it can produce. As such, economics is rather more like engineering than physics: more practical than spiritual." -- Robert J. Shiller

You Say It's Jay Powell?

Word spread around financial markets on Wednesday that current Federal Reserve governor Jay Powell would be introduced on Thursday as President Donald Trump's nomination for Chairperson of our central bank. This move was called a month ahead of time by my friend and colleague Douglas Borthwick right here at TheStreet. I must admit to being torn somewhat on this subject.

There is a side of me that was hoping (almost rooting) for this nomination for quite some time. I openly disagreed with both the Bernanke and Yellen Feds on policy, so if you read me often, then you know that. There is no arguing that the economy is now in a much better place than where it might have otherwise been. I am open to the idea that I may have been wrong on policy. That said, in economics we never say "mission accomplished", because you never know what tomorrow brings. To be very clear, the policies executed over the last decade or so did stave off depression, and have brought forward some economic growth. What we have not done is pay for these gains just yet. Someday there will be a price, and the hope of all involved is that the economy has hit what many used to call "breakaway speed" by the time that the hens do come home to roost. The side of me that preferred the nomination of Jay Powell is an active trader.

The other side of my brain -- though I no longer officially work in that capacity -- is an economist. My economist side would clearly prefer a rules-based approach toward monetary policy. For one, rules tend to make impactful decisions all that easier to make when unsure. John Taylor seemed like a good choice to my "Austrian" side. Perhaps there is a place on the board of governors awaiting Mr. Taylor, as I think his input would be helpful in shaping future decision making.

Jay Powell has been at the Fed for five years. His strength is considered to be in regulation (That would be a major positive after Daniel Tarullo admitted that he thought he took regulation too far only after announcing that he was leaving the Fed), where he seems to have a common-sense point of view. On monetary policy, he has never dissented, leaving many to consider him to be almost a Yellen clone. I would not go that far. Leadership impacts everyone differently, and all central bankers, when under the spotlight, become that much more dovish, as there is rarely political pressure from any corner to hasten the process of tightening policy.

A lot will be made of this being the first time that a new president has selected his own chief central banker in four decades. Let's not get too carried away on that. Donald Trump has clearly done things differently since announcing his candidacy for the Republican nomination for president. Did you think he would leave someone at the helm of monetary policy who, at the least, has been honest about being left in a state of confusion by persistently low wage growth and consumer level inflation? Funny thing, at least to me, is that I think we may be about to see some of that inflationary growth that Janet Yellen has been in pursuit of for so long.

The economy is currently as hot as it has been since the early 2000s. I know you have seen annualized quarter-over-quarter GDP prints at 3% or better for each of the last two quarters. I do not know if you noticed the Atlanta Fed raised their expectations for the fourth quarter from 2.9% to 4.5% mid-day yesterday. A long way to go? Yes, but wouldn't that just be something?

I do like very much the fact that Jay Powell is not an academic economist. I prefer to see folks with some real-world experience making decisions that impact people in the real world. The president is correct if he thinks that it will take more than someone who can't understand why the Phillips Curve has not worked properly over several years to guide this ship through an economy that feels like it's lifting off, while not disrupting financial markets that are threatening to melt up on the equity side, and finding the traction very sticky on the debt side. Clearly, long-term, debt traders have doubted that higher rates going forward are sustainable. On yields, you have seen the 2yr/10yr and the 5yr/30yr spreads, I presume.

U.S. dollar valuations worked their way a bit lower in response to breaking news that Jay Powell would be nominated to Fed Chair. Or is the downward pressure on the greenback the product of the House Ways and Means Committee's rush to put an official tax reform product on the table on Thursday, one day beyond their own self-imposed deadline? Word on the street is that there will be no changes to current laws covering 401K retirement plans (Thank goodness). It is also widely believed that there will be no attempt made to change the individual mandate to purchase health insurance.

The risk to what we expect to see from this group on Friday will be in how the deductibility of state and local income taxes are handled, as there has been (as far as I understand) no meeting of the minds on this issue. Clearly, Republicans from blue states would be put in a tough position by having to support such an issue. Then again, middle America is probably fairly sick and tired of subsidizing benefits in high-tax states. Both sides have valid points. The best idea, I think, that legislators from both sides of the aisle are likely to agree on would be slashing the corporate tax rate. How far they can actually go on this, and if these changes made will be considered permanent is still somewhat up in the air. Corporate tax cuts will not have the impact that they might have otherwise had if changes made are considered temporary.

Chart Of The Day: US Dollar Index (DXY, again)

Since the last time that we took a serious look at the U.S. Dollar Index, there has been change. We spoke at that time of 94 resistance and 92.65 support. Well, that lower level was never truly tested. The 94 level, however, did show up ... as support.

Let's take another look on Thursday and try to determine where broad valuations are headed. Remember that the U.S. Dollar Index is heavily weighted toward the euro, and the euro has weakened over the past 10 days or so, meaning that there is a built-in skew.

We have spoken often of a key, trend-changing level being placed possibly between 95 and 96. A 38.2% Fibonacci retracement on a model that begins with the late 2016 highs and runs through the September 2017 lows would place that level in the neighborhood of 95.82. Relative strength is still solid, and the moving average convergence divergence (MACD) is actually in great shape.

This chart suggests that although the nomination of Jay Powell to the top spot at the Fed may be seen as a dovish development, short-term upward pressure on the U.S. dollar is still a ways from completion. At this point, both proponents of the short-term upward trend and the longer-term downward trend are able to claim that their ideas are working. 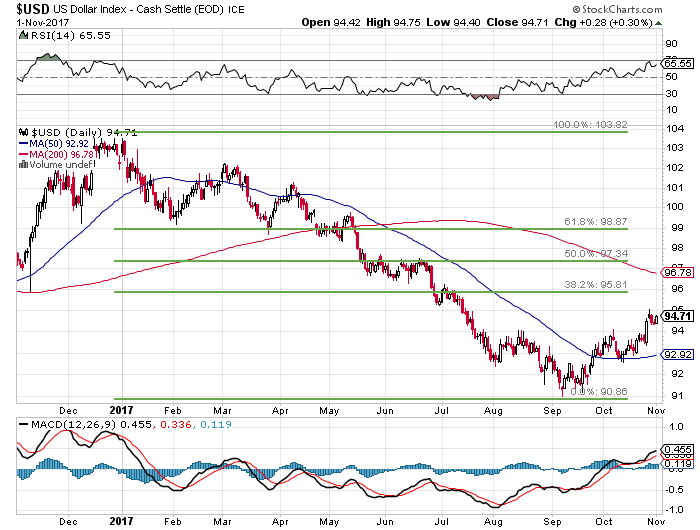 That 95.80ish Fib level would be a long-term trend changer if cracked. The 94 spot still matters to the downside. This ball may be more in Mario Draghi's court than in anyone else's.

Get an email alert each time I write an article for Real Money. Click the "+Follow" next to my byline to this article.
TAGS: Currencies | Markets | Regulation | Financial Services | Investing | Economic Data | Economy | Interest Rates | Fixed income | FOREX | How-to | Politics