You do know what they say about the honey badger. Markets don't seem to care all that much, either. Drama surrounding the nomination of the next Fed Chair? Don't care. Threats of missiles landing all over the Pacific Ocean? Don't care. Both sides of the aisle in Washington more interested in slinging mud than actually doing their jobs? Don't care. Historically high valuation? Oh, c'mon, it ain't that hard to figure out, gang.

Market-based pricing for securities, or at least equities, relies on one thing. Earnings. Yes, for my cynical friends, even in a perverse monetary environment. I get your dissatisfaction with what has happened there. I really do. Where I disagree with those friends that rail against the extreme measures that central banks have taken over the last 10 years is that one must understand that the environment changed. You are not wrong, but when environments change, we adapt. We do not lose sight of where we think the long and winding road will end. That's where you come in. That said, it is impossible to determine just how long that winding road actually is. In the meantime, we make it possible for ourselves to excel in any environment by being flexible. So, be flexible. Then excel.

Earnings are coming in better than expected. Robust, even. The environment looks good, really good right now. Revenues? Sharply higher than projected in many cases. Just look at the plus sign after plus sign on the year-over-year line. Why are firms succeeding? For one, corporate America got lean and mean. That happened a while back. "Skinny" corporate culture surprises nobody these days. What's different now is that this culture, coupled with the current state of the economy, has put these corporations in a position to excel themselves. In other words, firms that adapted to hard times are now doing exponentially better, thanks to a vastly improved macro-economic situation here and abroad.

Just this week, we have seen data that suggest headline inflation has nudged higher, Personal spending is hot. Manufacturing in the U.S., long thought dead, has been growing at a scorching pace all year. Consumer confidence remains so high that economists have trouble explaining it. That was just this week. On a much longer timeline, wages have started to work their way higher, along with participation. The housing sector, after a head-fake lower, has resumed the level of strength seen earlier in the year. Inventory building is back in style. Can't argue that retail sales aren't running at better levels than anyone saw coming a year ago.

Then there are those core capital goods orders. The proof is in the pudding. Businesses are investing in profiting from what they do. Huzzah. Other than payouts to shareholders, and repurchases, almost everyone believed that capital investment was dead. The worm has obviously turned. Businesses are now being forced to compete aggressively, and that they are. Demand is there. Now, if we can just keep the dollar from regaining its strength.

The holiday season, by all estimates, accounted for roughly 20% of 2016 sales across the retail space. That number can, in a good year, approach 30%. Hold that thought.

That same holiday season is a little longer than usual this year. Christmas lands on a Monday, meaning that more people will not have to work in the days leading up to the big day, and on top of that, there are 32 days between Thanksgiving and Christmas. E-commerce is set to keep on growing. Of that we have no doubt. Many expect to see growth of 15% to 20% for that space over the course of the season. Already long FedEx (FDX) and the transports. How about you? Is there room for brick-and-mortar growth? Maybe. If there is to be a last stand, the calendar has set them up nicely this year. In other words, if this season is a flop for retailers, then maybe it really is all over.

The good news is that most folks who do look at these things are looking for brick-and-mortar growth of 3.5% to 4.5%. That would top what has become the norm in recent years, which is growth in the mid-threes percentage wise. I am sure that you saw Target (TGT) announce plans to add 100,000 seasonal workers. Macy's (M) and JC Penney (JCP) have also announced plans to add tens of thousands of folks to the short-term payroll. (Don't even look at their quick ratios.) Target is not part of the mall, which has actually been an advantage. Walmart (WMT) enjoys that same privilege. Both have taken aggressive steps to compete with E-tailers, or more specifically, the beast that is Amazon (AMZN) . Both have also aligned themselves with Alphabet (GOOGL) . That story will head in its own direction, and really may not be part of this tale.

For the rest of the group, the success of the season will boil down to how well they meld brick-and-mortar sales with their own e-tailing, because everybody is truly omni-channel at this point. Then it becomes a matter of execution. Many customers will physically participate in both realms simultaneously, which will put a lid on retail pricing power.

This, in my opinion, will drive off-price retailers to continue to outperform their full-price peers. This bodes well for the likes of Kohl's (KSS) , (long a Sarge fave), TJX Companies (TJX) (which is a holding in the Action Alerts PLUS portfolio that Jim Cramer co-manages as a charitable trust), Ross Stores (ROST) , and Burlington (BURL) . By the way, BURL ran 5% on Tuesday after the firm raised guidance. Rock and roll. That firm reports on Nov. 23.

The way opportunity presents itself across retail has changed for good. What did I tell you about adapting to your environment? Retailers that adapt will survive. Those who adapt the way that they invest in this space, meaning that investment dollars favor the aggressive, will have a better chance to make some dough. At least that's my opinion.

Chart of the Day: The Mall Illustrated (SPG) 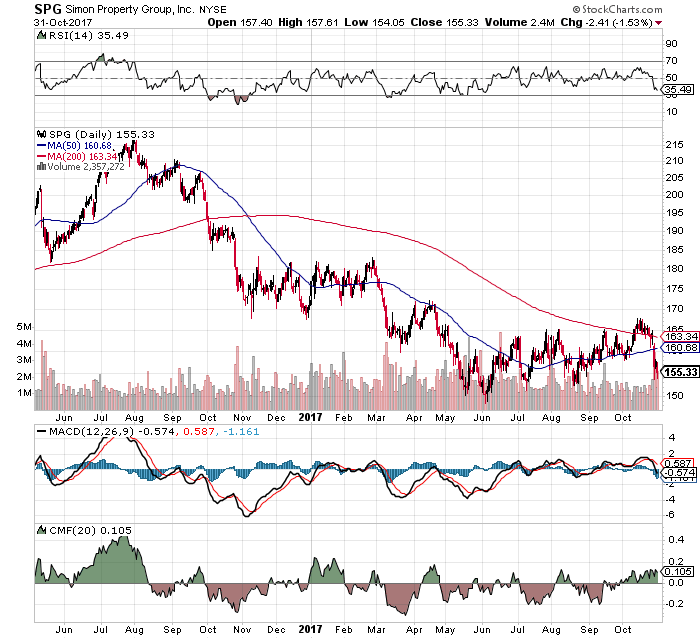 Simon Property Group (SPG) reported its third-quarter numbers on Friday. The firm beat expectations for both EPS and revenue. On top of that, it raised the dividend. The moves went over like a lead balloon. Analysts did come out in defense of the firm in the face of this recent selloff. Investors want none of this.

This 18-month chart captures, I think perfectly, investor expectations for the mall. This stock never recovered from the death cross experienced in early November of last year, though there have been several attempts made. One can see that there had been some institutional monetary inflows over the last month that only left SPG testing the low $150s for the fourth time. There is nothing impressive about the firm's relative strength either, and now with the recent swing in the shares price, hopes for a golden cross will have to be delayed some.

A rough 28% decline over 16 months. Slow and steady decline. Welcome to this world.

Get an email alert each time I write an article for Real Money. Click the "+Follow" next to my byline to this article.
TAGS: Investing | U.S. Equity | Earnings | Markets | Economy | How-to | Politics | Risk Management | Stocks

Some retailers are faring well while other are not, and it has a something to do with the income levels of their customers.