I find it curious that so many think there is some magic potion for the markets. Like a light goes off that says, the bottom is in or the top is in. It doesn't work that way.

It is helpful when there has been a big capitulatory decline. Because it tends to be so definable. But what we've seen of late is not of that variety. So let me review once more for you what I currently see in the market.

I also see the number of stocks making new lows contracting not expanding any longer. Another positive divergence.

The most interesting indicator I have right now is the McClellan Summation Index. As a reminder this is a very smoothed version of the advance/decline line so it shows us what the majority of stocks are doing. It peaked last summer and since the calendar rolled to September it has been a straight shot down.

Each day I calculate what it would take to turn this indicator from down to up. When it needs more than 2,000 advancers minus decliners to turn we're into oversold territory. At +4,000 we are extremely oversold. Two weeks ago this "what if" was at +3,700 just prior to a rally day. That means the rally couldn't possibly take it from down to up.

Tuesday's rally finds this "what if" ending the day where it needs a net differential of +300 (advancers minus decliners) to turn it back up. That is very doable if we have some follow on to the rally.  So that is a change between a week or even two weeks ago.

It has always been m view that we tend to get better rallies when the Summation Index can turn itself around within a few days of a low. When it takes more than a few days, the rally tends to peter out quickly.

I see negative sentiment. Everywhere I turn (although I fully expect that as soon as we put together a few rally days that will change). That's anecdotal though. So let me report the Investors Intelligence Bulls did fall. They are now at 44.3%. To put that in perspective, in early October they numbered just over 61%. Last week they were still at 50%. This past spring they bottomed out at 42.2%. That sounds like a sentiment change to me. 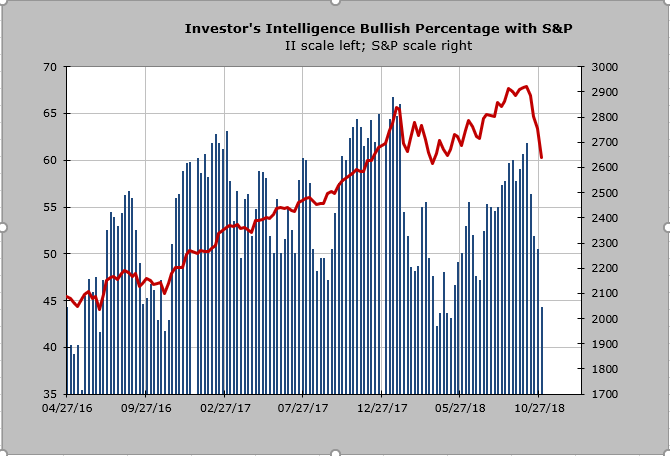 I am still waiting for the 10-day moving average of the put/call ratio to roll over. Again, if we can rally for more than a day, it ought to get there, but thus far it hasn't. Thus the indicators are lined up, now the market just needs to cooperate.