My guess is that most of us are just fine with the month of October packing its bags and taking a hike. See ya! Equity markets behaved in rather robust fashion on Tuesday. Why is that? Severely oversold? Bad news is good news? Are we back to that underlying tenet? Perhaps.

The news was not really bad, but in this superficial world that we now live, a somewhat dated (August) print of 5.5% growth for national housing prices (Case Shiller) is seen as negative, as that print was well below consensus, as well as below the July pace of 5.9% growth.

Maybe it's because the housing market has been handing down consistently weaker numbers for many months now, from across all slices of that industry. Maybe, it's because the Atlanta Fed, known for starting every quarter a bit on the high side and then ratcheting it's way in, is currently modeling 2.6% GDP growth for the fourth quarter. Maybe it is the (not so) suddenly weaker state of U.S. domestic macro (we have been warning the central bank all along), and it will actually dawn on our monetary decision makers that it will be they who have thrown the baby out with the bathwater.

Yes, I know. The 3.5% print for seasonally adjusted headline growth was so grand, supported by 4% growth in Personal Consumption Expenditures. I have tried to explain the drop off for various measures of Final Sales in current-dollar measures. That's too deep for most. We'll try it this way. Imports roared. That means to me, that multinational businesses built inventory ahead of tariff implementation. Did you kids see Monday's September print for Income and Outlays as posted by the Bureau of Economic Analysis? Consumer Spending outpaced Personal Income for the third month in a row. Well, there is your third-quarter consumption right there.

Think that trend is sustainable? Not in my family, it wouldn't be. When my income is down (I am self employed), we cut back on spending. Kind of goes hand in hand. My guess is that most people probably behave similarly.

Equity markets finally found their footing yesterday, because the probability of future increases in the Fed Funds Rate, as priced in by futures trading in Chicago, has dropped. It really is that simple. As I sit at my desk at zero dark thirty on Wednesday morning, a December rate hike is currently running at a likelihood of 77%. After that, a March hike is trading at only a 50/50 chance, and these futures are only pricing in a 51% chance of a second rate hike at any point in 2019. So there. It really is the Fed, for any still wondering.

Yes, fiscal policy is still sloppy. The mid-terms are still an uncertainty. Trade wars are still dangerous, but as you have seen in many forward-looking statements, supply lines are being reworked and renegotiated. Obviously, this compresses margins, but businesses do adapt to changing conditions.

In response to expectations that the ability to reason might reach the FOMC, many beaten-up firms that have suffered in recent weeks rose -- from the industrials, materials, and consumer arenas. Oh, let's not forget the semiconductors, but that might have just been a reaction to decent numbers in the face of absurdly oversold technicals.

Rising dollar strength, already unwelcome by corporate America, reached 16-month highs on Tuesday as measured by the U.S. Dollar Index (DXY). That measure, which is heavily weighted toward the euro, cracked the 97 level in the afternoon, which is just about the highest it's been since the inauguration of President Trump, who we all know prefers a softer U.S. dollar. This came after eurozone Q3 GDP disappointed, which in turn -- if the condition persists -- would exacerbate the divergence in global monetary policies.

China has already guided the yuan to decade-long lows versus the dollar. Nobody saw this coming? Come on. We tried patience with the FOMC. We tell them ahead of time, over and over, what the economy looks like and what underlying market conditions feel like from this side of the moat, and they still just never get it. All they had to do was read, or listen.

Keep in mind that while crude prices have slumped badly, as inventories have built and the dollar strengthens, the condition is likely somewhat temporary, as U.S. sanctions on Iranian oil will take effect next week. This will impact global supplies over time, and, in my opinion, should not only put a bid under the commodity, but increase demand for both exploration and oil services.

Probably the most important news facing the FANG names -- Facebook (FB) , Amazon (AMZN) , Netflix (NFLX) and Alphabet/Google (GOOG) , (GOOGL) -- or high-tech in general, is the decision of the UK to move ahead with a tax on locally, digitally derived revenue generated by large multinationals. Though these names did enjoy a rebound in late New York trading on Tuesday, this is a headwind going forward and may be one source of margin pressure that becomes very difficult to price in. (FB, AMZN and GOOGL are Action Alerts Plus holdings.)

As the UK pushes toward a final Brexit from the EU, obviously British leaders are kicking over rocks in order to cushion the impact of an expected slowdown in growth. Here is a prize that many feel is under-reported. For the FANG names -- and really any other tech giant benefiting from international, digital commerce -- this will be about how fast the idea spreads from the UK.

Surely, the EU, Asia and Latin America are watching these developments with keen interest to see if this really becomes anything close to a fiscal revenue driver in Britain. A similar proposal is already under consideration in the EU. How dangerous is a tax on sales and not on income? Will this be deductible from corporate income tax? Perhaps this is the next step in what ends up being a branch of a global trade war. So much remains unknown. About all we do know is that for shareholders, this is simply about different degrees of bad.

First off, I have not yet been flat Nvidia (NVDA) , at least not for a long time. One thing that I always try to stress to readers is the need to create target prices and panic points for every position, and then act in some way when those levels are reached. Coming into this recent bout of market turbulence, my target price for NVDA was $290. The industry average target was $294. My panic point was $240. 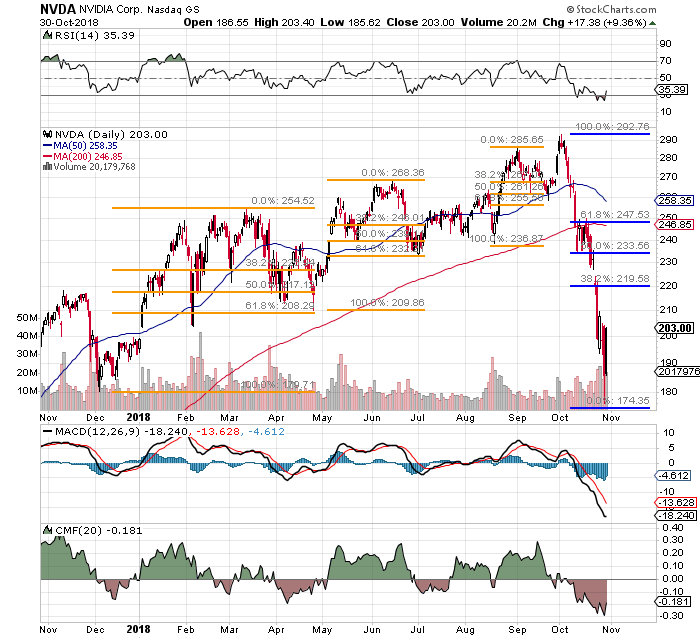 Take a look at the chart. Right away, you'll see the tendency of Nvidia to rebound at retracement levels of 61.8%. Throughout the current calendar year, this pattern has not been tested to any significance in this direction. It had always been the retracement of a rally prior to this.

I did not trade the name perfectly, but by taking portions of the long off as the stock passed $290 to the upside, and within a couple of weeks, $240 to the downside, a considerable percentage of the risk was extracted as capital that can now be redeployed. That move has already been initiated. The position, however, is still too small at this point, if that was indeed the bottom. I found it difficult to be aggressive toward those lows, though I was lucky enough to add one tranche in the $189s.

Why am I telling you all this? Simple. I can't make this necessity any clearer to retail traders. I don't just have a mental target. I have too many open positions at all times for that. I have a notebook that I update every Sunday night. My target prices and panic points are written down, and that helps with self-enforcement. Only we can save ourselves.

Nvidia is expected to report Q3 results on November 15.

Note: I would advise retail traders, who might be unsure of their level for risk tolerance, against the sale of out-of-the-money puts in this name, as this equity moves fast, and such a move in these markets could easily leave the trader on the hook at disadvantageous prices.