Starbucks Corp. (SBUX) gets a lot of press attention - some bad but much of it good. SBUX is scheduled to report fourth-quarter earnings after the closing bell on Thursday, and fundamental analysts will be looking over the numbers for things like same-store sales for the U.S. and overseas growth and the cost of goods and labor.

I imagine that Bill Ackman will be eyeing the numbers too. Bill Ackman and his Pershing Square Capital hedge fund bought 15.2 million shares of SBUX recently.

In this daily bar chart of SBUX, below, we can see some interesting price moves. In June we can see how prices plunged quickly from $58 to $48. After this quick downside washout we have seen prices trend higher the past four months.

Prices are back above the rising 50-day moving average line and above the bottoming 200-day line.

The volume pattern since July does not look like volume is expanding on the rally but the daily On-Balance-Volume (OBV) line does indeed go up from early August showing aggressive buying.

The daily 12-day price momentum indicator in the lower panel show higher highs from August and it does not divergence from the price action.

Currently SBUX is above the bearish 40-week line.

The weekly OBV line shows a similar downward channel movement the past three years. The OBV line has crawled higher the past four months but it has not broken out of its longer-term bearish pattern.

The Moving Average Convergence Divergence (MACD) oscillator just crossed to the upside for an outright go long signal. A cover shorts buy signal can be seen in August. 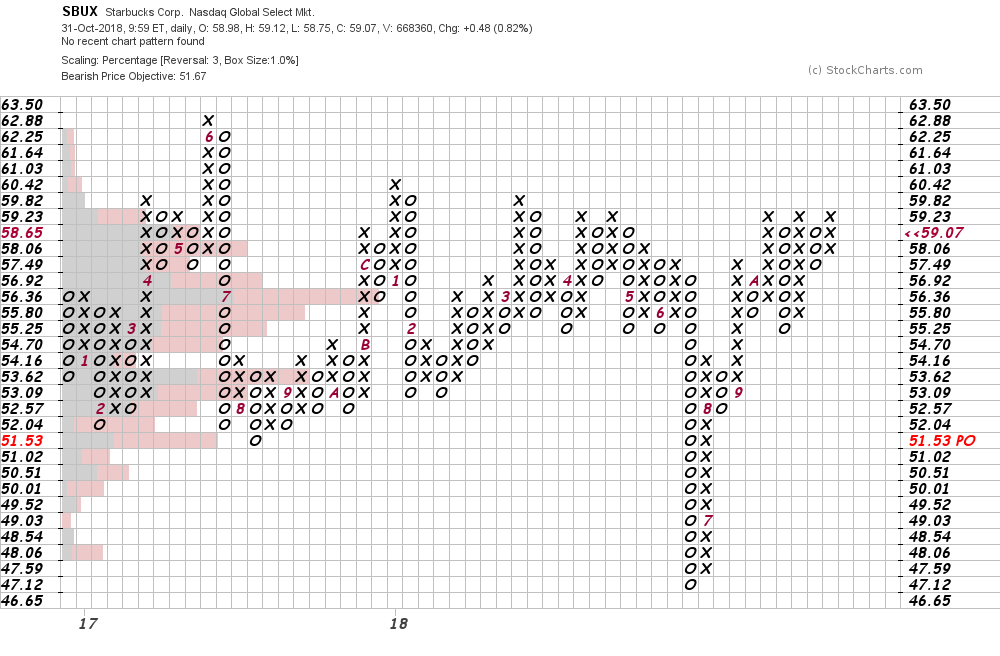