"No trick or treaters came to my house for Halloween. For some reason, people around here are scared of me." -- Glenn Danzig

Just how scary are stocks right now? Based on historical valuations, there are some who are frightened by where financial markets currently stand. The fundamentals are there, supported by earnings, but then again, the fundamentals themselves have been positively impacted by what some might call artificial factors that lie outside of the norms of the free market. I try to look at valuations pragmatically. As monetary conditions normalize, so will volatility. It's just that simple. One can easily adjust the level of exposure to this risk before it reaches the point where "the horses have left the barn", so to speak. So, there is no reason for widespread fear, but clearly a need to understand that turbulence realistically lies in our flight-path. On an individual level, there are clearly some stocks that may frighten the individual shareholder. For different reasons, these stocks, though they may make you some dough running forward, will make the journey one of the white-knuckle variety.

There would appear to be no fear in this name. Amazon (AMZN) closed last night at $1110.85. This would be $132 above its own 50-day simple moving average, or nearly 12%. The firm reported an incredible earnings beat last week. Sales grew 35% in North America and 29% internationally. Amazon Web Services? Oh, just 42% growth. Amazon has delivered great victories to its shareholders, yet nothing short of death, or near-death to its rivals. The mall? Yeah, who do you think is to blame for that disaster? Short sellers? Been there, done that. Not going back. This stock is a leviathan.

Take a look at this chart showing relative strength of 78 (70 would normally be considered an overbought condition). How about that moving average convergence divergence MACD? The 12-day exponential moving average (EMA) now stands above an incredible 18, and look at the spread down to the 26-day EMA, even with that one seven points above the zero bound! Incredible. 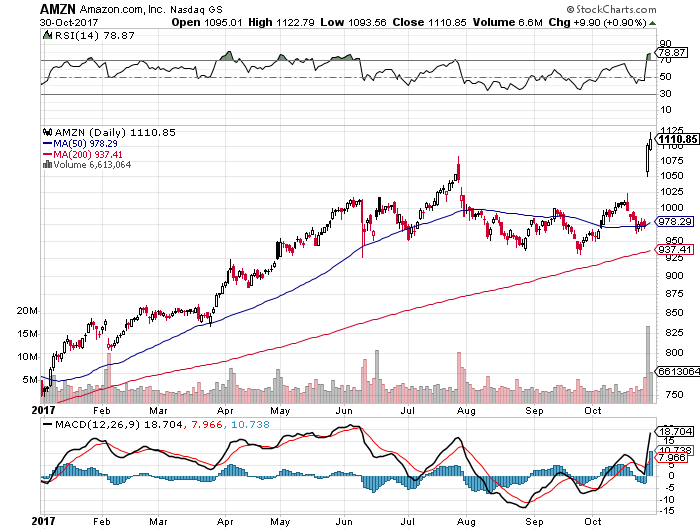 Chipotle Mexican Grill (CMG) closed on Monday at $268.70. This is down from the low $320s just last week. Is the stock worth the risk at this level? It does seem to have stabilized. Yeah, right. If you ask me, this is one stock that could be just one negative headline away from even greater volatility. Third-quarter earnings painted the portrait of a firm that missed expectations for both revenue and earnings per share. Comp sales did grow. Operating margin did grow. Labor expenses declined. The chain continues to open new stores. The problem here is that projections for growth have been too high, and the firm itself has repeatedly stumbled on the public stage.

Take a look at the chart below. See the death cross (50-day SMA crossing below the 200-day SMA) in August, when those famous horses were only thinking about leaving the barn. Now, take a look at the Chaikin money flow indicator. You can see institutional money pouring out of this name from early June right through September. Does that mean all of the air is out of this balloon? Does that mean that there is plenty of dry powder available to this name?

There's no dry powder at market prices that are still 28 times forward looking earnings, if this crew cannot first inspire a belief that former growth levels might ever once again be approached. In the wake of this most recent collapse, Credit Suisse, Wells Fargo, RBC Capital, SunTrust, Cowen, and Cannacord Gennuity have all adjusted their target prices. 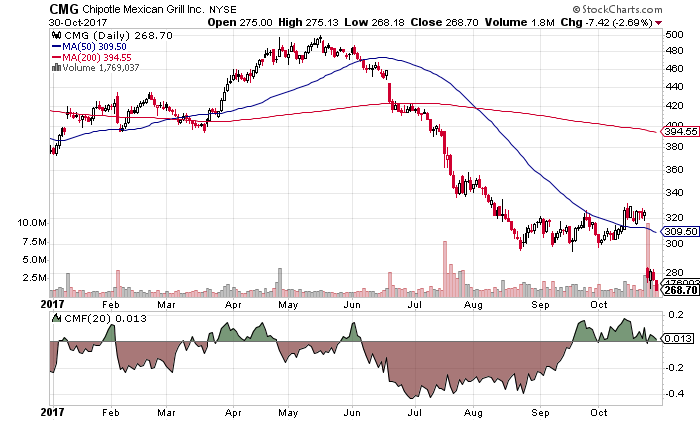 Ever try to catch a falling knife? Last week, I profiled Celgene (CELG) , and said that I would rather play volatility going forward than take a directional shot, even after the visibly epic collapse. Can you blame me? This is another name that reported last week and missed revenue projections. The firm also guided full year revenue toward the lower end of the previous range. There have been some minor positive developments over the past few days.

The past few days offer little solace to those who hung on to the shares. It was on the anniversary of Black Monday that news hit the tape that the firm had pulled two studies evaluating its Crohn's disease candidate Mongersen due to the risk possibly outweighing the benefit. The associated pre-tax charge could approach half a billion dollars. Out came those horses. On this year-to-date chart, you can see that some money has come back into the name at these levels, despite a horrendous looking MACD, and an RSI still stuck at an almost comical level. 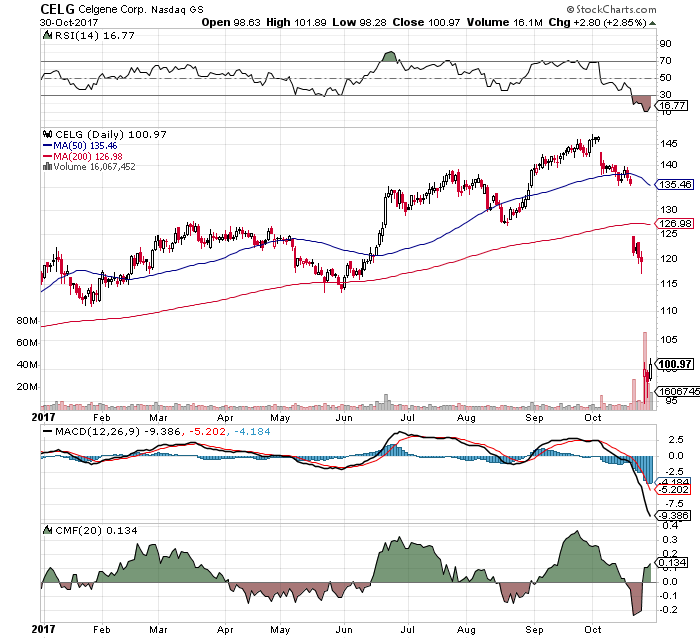 What? Sarge, I thought you were long the shares, and had higher price targets? Gang, honesty is the only pure currency we have in this business, and this is one scary stock. While evidence continues to mount that absolutely nobody was held accountable for anything at this firm for many years, it does appear to this guy to have the right person at the helm at this point. The problem is that this right person (John Flannery) is a realist. He understands that he does not have the cash flow to effectively break the firm up. He probably also understands that the dividend (yielding 4.5% at these prices) in its current form is unsustainable.

The market is, at this point, pricing in this adjustment, as investors await Flannery's dog and pony show on Nov. 13. That is the day that we learn a lot more about this firm and how it plans to survive, as certain business lines will be sold. Where will (GE) find support? The technicals are useless in my opinion heading into a high-profile news event flush with unknown content. As you can see, the shares are oversold. Momentum, money flow, and the gap between the 50-day and 200-day simple moving averages just keeps getting worse. 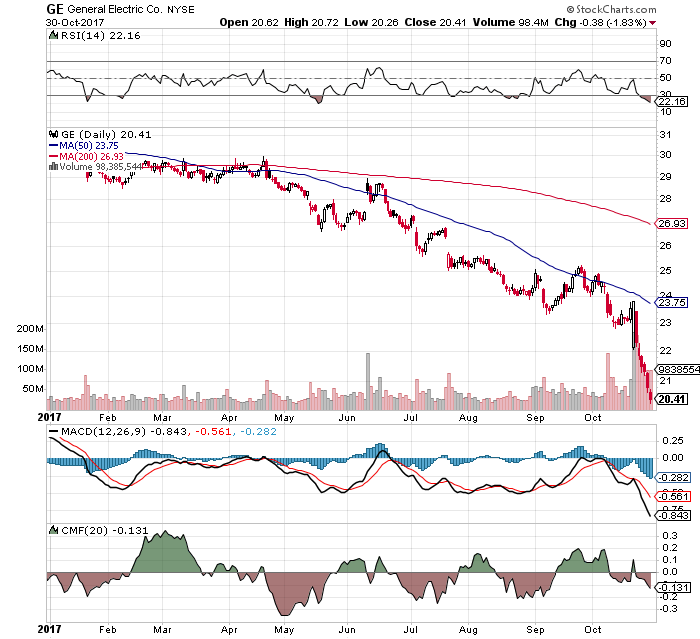 I actually made some money on my most recent short in this name. Of course, over time, I have lost money shorting this one. That's my point. This is a firm that simply burns cash. The saving grace? The fact that Elon Musk has a perfectly refined talent for raising money... just not profits. Demand is not the problem for this firm, production is. Late last week, Evercore downgraded the name, and cut their target price on such concerns.

The technicals are all pretty ugly for Tesla (TSLA) . That said, this stock is currently priced at a level where it has found support several times in the past. Money has been drifting out of the stock for about a month now, and the 200-day SMA does appear to be under assault. Never underestimate the undying belief of this firm's shareholders, though. This is the one name where fundamentals count for nothing. This is the name that I think most likely to hurt bulls and bears alike. 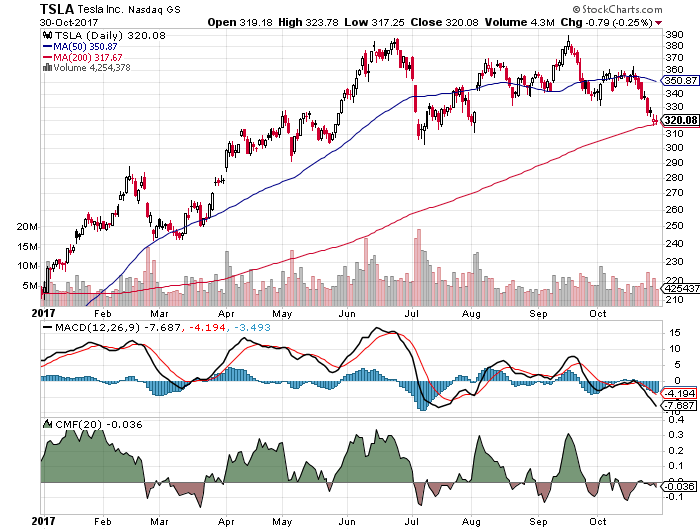 I told u 2 buy bonds ��. Then again a broken clock is right twice a day.

At the time of publication, Stephen Guilfoyle was long GE, short GE out of the money calls and puts, although positions may change at any time.

Get an email alert each time I write an article for Real Money. Click the "+Follow" next to my byline to this article.
TAGS: Investing | U.S. Equity | Consumer Discretionary | Financial Services | Industrials | Markets | How-to | Risk Management | Stocks