Columbia Sportswear Co  (COLM) has outlined a potentially large base formation in the past twelve months. We can see signs of aggressive buying since February -- and a test of the 2015 highs could be coming in the months ahead.

Let's look at our charts and indicators to see how this might play out.

In this daily bar chart of COLM, below, we can see that prices traded sideways, between $51 on the downside and the $62-$63 area on the upside, from December to early October. Prices crossed above and below the 50-day and 200-day moving averages several times, but since September, prices have stayed above both of these now-rising averages. The trend has changed from neutral or sideways to up.

The daily On-Balance-Volume (OBV) line has been rising from February and confirms the advance we have been seeing. The Moving Average Convergence Divergence (MACD) oscillator is rising and since early September, it has been above the zero line.

In this weekly bar chart of COLM, above, we can see that the sideways or neutral trend of COLM has been going on for more than a year. Prices are now above the rising 40-week moving average line. and the weekly OBV line has been improving in the past four months. The MACD oscillator on this timeframe has been above the zero line for the past three months. 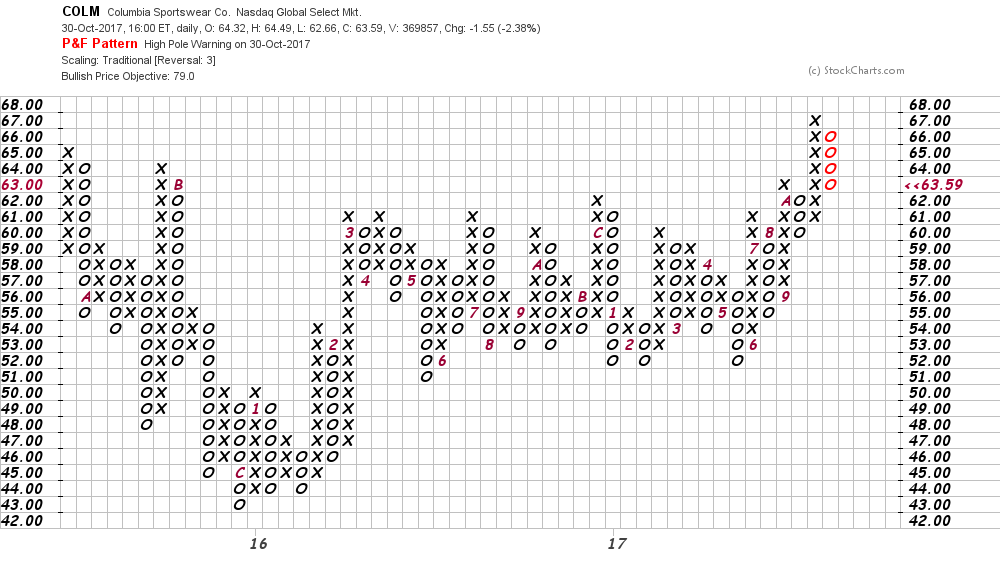 In this Point and Figure chart of COLM, above, we can see how prices are breaking out on the upside from a large consolidation pattern. A price target of $79 is projected.

Bottom line - COLM is emerging from a large base and is set to rally to the $79-$80 area. Aggressive traders can go long at current levels and on strength. Risk below $60 for now.

Get an email alert each time I write an article for Real Money. Click the "+Follow" next to my byline to this article.
TAGS: Investing | U.S. Equity | Consumer Discretionary | Consumer | Markets | Stocks