The mega-merger of General Electric (GE) and Baker-Hughes (BHI) continues the consolidation in oil services that our low oil and gas price environment has been forcing, and makes the combined company the No. 2 provider of on- and offshore services. But for us as investors, only one question needs to be answered first -- and that's what to do with these stocks. For me, if I were holding BHI right now, I'd take the money and run.

GE has been looking to break out its oil and gas division, an approximately 10% subsector of the integrated behemoth. Like all other oil services companies during the last two years, the results of GE oil and gas has been less than stellar, despite CEO Jeff Immelt's great hopes. GE has excelled in the technology of oil services, including turbomachinery, seismic imaging, sensor measuring pumps and well control systems. Baker-Hughes, on the other hand, is less than up to date in modern tech, but certainly deep in in-the-field relationships and experience. It is a merger that, on paper, looks to be well positioned.

But it's in the details that we see BHI is doing far better than GE and likely better than it has any right to.

GE had been looking to purchase Baker-Hughes after the merger of BHI and Halliburton (HAL) fell apart, but had wanted to buy only the most accretive subsectors for GE -- mostly in the offshore space. Meanwhile, Baker had held solidly in its negotiations, and was able to get GE to buy the whole company, or at least a controlling 62.5% stake in it. This will include a special dividend to shareholders of $17.50 a share. It gives Baker downstream exposure it never had before, as well as international exposure in which it was lagging, compared to both Schlumberger (SLB) and Halliburton. (General Electric and Schlumberger are part of TheStreet's Action Alerts PLUS portfolio.)

So, for GE, we see an almost insignificant breakout of an underperforming sector, with the possibility of greater domestic onshore exposure.

But with Baker-Hughes, we get much stronger capitalization, a mega-jump in technology to add to their portfolio of services, better exposure offshore and internationally and a special dividend that indicates a very nice premium being paid.

Look at the stock price, you'd say BHI has already benefited from the busted Halliburton deal, rising first on the deal announcement and then again on the $3.5 billion breakup fee that was delivered after the deal failed in May. Shares have rallied this year from under $40 a share to open today above $60. 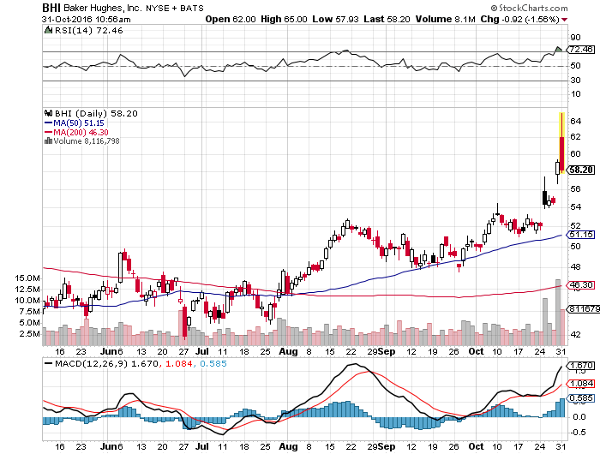 In a truly disastrous oil services environment, when fees on services have been slashed in many cases below cost, the outperformance of Baker-Hughes is frankly astounding -- everything has seemed to go their way this year.

But as a trader, I wouldn't wait for that trend to stop. This GE deal is just too good for them, and if I were holding BHI shares, I'd take the money and run -- fast.

Get an email alert each time I write an article for Real Money. Click the "+Follow" next to my byline to this article.
TAGS: Commodities | Markets | Energy | Investing | Mergers and Acquisitions