Thin ice. They tell us that investor sentiment is supposedly negative right now. You don't say? This is fact that is not open to debate. I will, however, pose you a serious question. Are markets susceptible to downside pressure right now because investor sentiment is weak, or is the mood dour because the markets are susceptible to that downside pressure? Please bear with me and allow me to opine.

We all saw and experienced the seemingly positive change in direction for all of the major indices in early Monday trading that made a turn for the worse. Then, the directional overshoot was quite staggering. What happened? No solid news. Talk that the U.S. may end up implementing tariffs on the balance of Chinese imports caused that wreckage. This is something that markets have been expecting for some time, and one might think would that at least be partially priced in, given the uncertainty around the issue.

Overnight, in a televised interview, President Trump said that the U.S. will "make a great deal with China." What happens then? U.S. equity index futures head in a northerly direction. Poof. Like magic.

The point is, my fellow citizens, that price discovery is no longer the result of supply and demand. No longer the well-reasoned result of complex thought. Our marketplace is being led around in a way that is reminiscent of nothing other than the town drunk.

These headline-scanning algorithms do not stop and think the way a human trader might have -- that the market in general, or a security in specific, might be too cheap for a sale. These algos race each other to the slowest order on the other side of the market. As long as the very next sale is in the same direction, thus exacerbating the movement, the race has been successfully won.

I really do not think this problem is correctable until price becomes more important than speed to the big players. You and I care where we buy and sell and equity. The high-frequency crowd does not. It's not even a consideration. Race against a competing sell order to a slow bid, hit that bid, then turn around and become a lower bid for that other sell order to hit at a discount.

That, my friends, is why markets are so fast now, and why there is absolutely no second-level thought at the point of execution. There will be no negotiation at a centralized point of sale. There has not been for quite some time. This was understood, but tolerated, in markets that had become less than volatile due to piled-on monetary stimulus in an economy stuck in the mud for 10 years.

Those things that impact forward-looking valuations have changed though. Significantly. Monetary conditions are being tightened regularly, and aggressively, without much understanding or thought given to the impact of doing so at such a heightened pace. Fiscal policy may even be sloppier in its discipline and implementation than the monetary side. Balancing a budget, friends, is for you and me, not the government -- not at any level of government. Oh, I'm sorry. Was I supposed to make you feel better? Well, I can, and I have told all of you how to defend yourself over and over.

I know these moves in the markets hurt. In fact, they stun. Even those of us with many decades of experience do not have a ton of experience in thoughtless markets dominated by programmers in bizarre fiscal and monetary conditions.

Our defense is clear. These programmers hire folks just like us to read their charts. We must know where we intend to be in names we care about. Target prices and panic points are an investor's best way to raise their hands in time, because not only do these electronic traders not care if they hurt you, they hope that you react to market momentum, and do so slow enough so that they can. Don't race them. Make them accept your price. Rage against the machines.

The Brooklyn Academy of Music

Having grown up musically talentless in a talented family, I had no choice when I was a young lad. I was going to spend the afternoon at the Brooklyn Academy of Music. My sister would be on stage, playing the piano. My brother and I (both being palookas) would much rather have stayed home so we could play pick-up baseball with our fellow street urchins, but that was the way the cookie crumbled back in those days.

Tuesday morning at 10 a.m. ET, that stage on Lafayette Street will be the focus of Wall Street, as, for the second time this autumn, Apple (AAPL) will hold a product launch event. Last month, it was three new iPhones and smartwatches. Today it will be iPads and MacBooks --  just in time for the holidays. Do I care in the least about new consumer electronic products from the leader in the category? Not one bit.

I do care, however, if people in general buy them. I care even more if the masses in aggregate latch onto Apple Music, Apple Pay, Apple Care, and iCloud. All of these gadgets, and keeping them current, are how the firm moves the U.S. consumer toward a state of dependency upon Apple' service-oriented ecosystem. The subscription economy. Recurring, high-margin revenue. In other words, force a higher valuation on the equity. China? Yeah, obviously that matters. Did you read Jefferies analyst Timothy O'Shea yesterday? O'Shea looks for services to reach 40% of Apple gross profit by 2022.

AAPL reports its fourth-quarter results this Thursday after the closing bell. Although revenue is expected to print at a rough $61.5 billion for the quarter, it will be the first-quarter revenue projection -- which could top $93 billion -- and the services breakout that will impact the share price.

I come into the day long AAPL. My thought is this. Should the shares pop in reaction to Tuesday morning's launch event, I am likely to shave something off of the equity position, and given a chance, buy it back at a discount either pre- or post-earnings. I'll play this by ear. I am also prepared to add significantly to this position at both the $200 and $180 levels. Think that's crazy? After what we've been through? 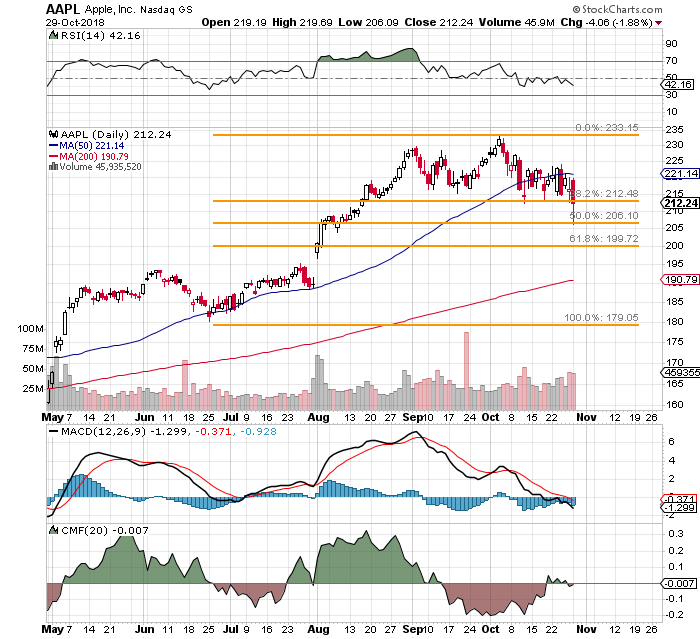 I want to show you what I am thinking. During Monday's regular session, one quickly sees that the 50% retracement level worked to perfection. One also sees that, barring that electronic overshoot, the 38.2% retracement level is more or less where the name closed.

Both may matter. If they do, then it stands to reason that the 61.8% retracement level could also factor in. That's the discount that I ultimately desire.

My target price for this name has been $255. That spot is neither here nor there, right now. It's meaningless. My panic point for AAPL has been $206. For my own purposes, I am now dropping that level to $200 for an add, not a sale.