Merck (MRK) was confined to a sideways trading range from February, but recently broke to the downside. Selling has been pretty intense with two gaps to the downside and heavy volume.

I looked at MRK at the end of June: "I like buying strength because it tells me I am trading with the market's direction. I would suggest that traders go long MRK on strength above $67 and risk a close below $63 or approximately where the 200-day moving average line intersects."

I must admit I did not anticipate the rapid breakdown in prices recently, but I am glad I dodged a bullet by not getting long MRK, as it never rallied above $67. Not much of a consolation. Let's check the current charts and indicators to see if it might be a time to buy the break.

In this updated daily bar chart of MRK, above, we can see the sideways consolidation pattern between $61 on the downside and short of $67 on the upside. Prices crossed above and below the 50-day and 200-day moving average lines several times, but prices started a downward path in mid-September. Prices made a peak in September that equaled the June peak, but the On-Balance-Volume (OBV) line made a slightly lower peak. This bearish divergence began to play out quicker as MRK moved into October.

The OBV line picked up speed on the downside, signaling that sellers of MRK were being more aggressive with heavier trading volume on days when the stock closed lower. The Moving Average Convergence Divergence (MACD) oscillator crossed to the downside for a take-profits sell signal.

More bearish signals have been triggered recently with the slope of the 50-day moving average line going negative and the MACD oscillator crossing below the zero line.

In this weekly bar chart of MRK, above, we can see prices have rapidly broken below the rising 40-week moving average line. The chart shows some support around $58 but not so much to feel confident that the area will hold. The weekly OBV line has been making lower highs since February and the weekly MACD oscillator has crossed below the zero line for an outright sell signal on this timeframe. 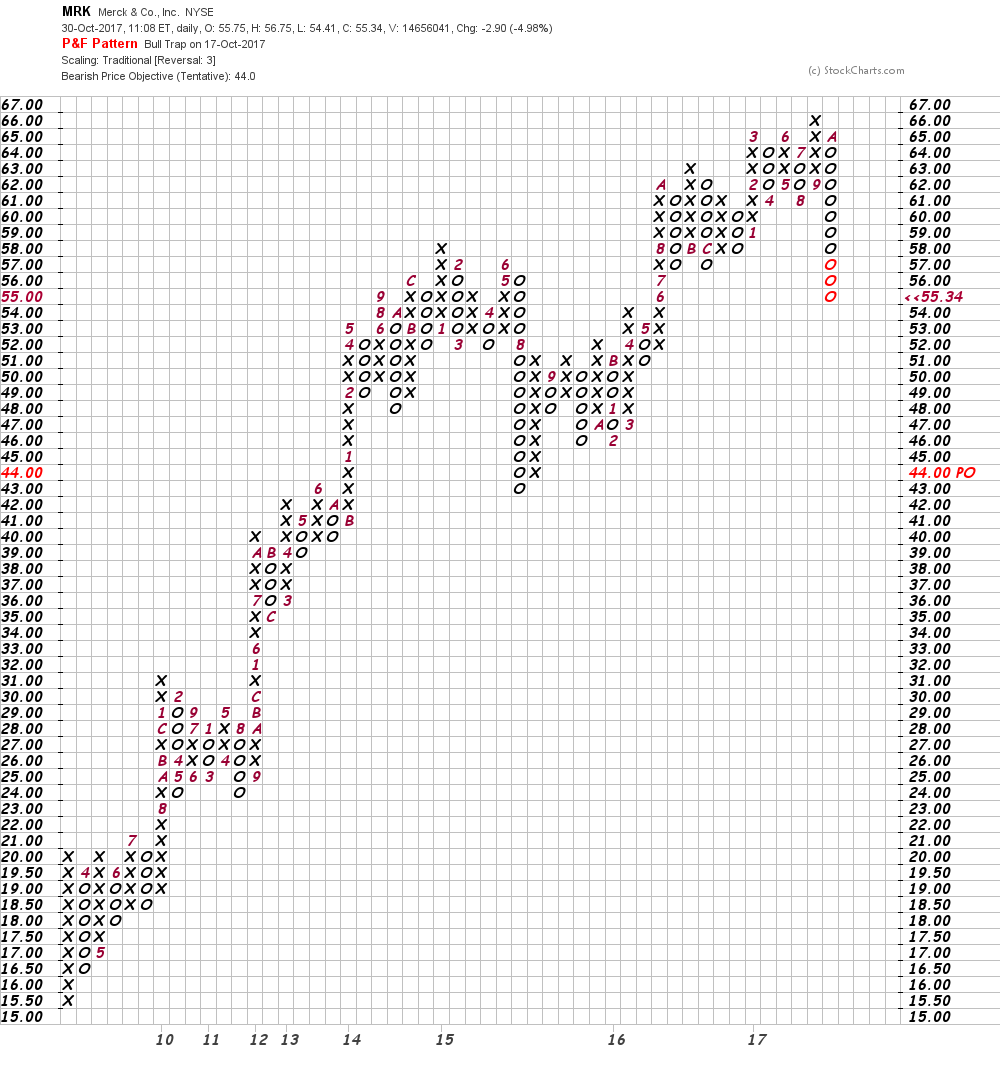 In this Point and Figure chart of MRK, above, we can see the sharp decline without the price gaps. The trade at $56 broke support at $57 and opened the way for a possible deeper decline to the $44 area, according to this method of charting.

Bottom line: Prices have made a sharp decline in a short period of time, so they are extended on the downside (a.k.a. oversold). Prices could bounce, but without a base pattern or new accumulation, a sustained advance is unlikely at this time. The Point and Figure chart suggests risk down to $44, but support can be seen beginning around $51.