"I can't change the direction of the wind, but I can adjust my sails to always reach my destination." -- Jimmy Dean

As you tear that melon-sized appendage of yours off of the comfort of that thing you call a pillow, you must wonder just where it is that we stand and just where it is that we (we, being the financial markets themselves) are going. I spent part of my Saturday participating in a panel discussing all things ETFs with the likes of Peter Tchir, and Bob Lang (really smart dudes) at TheStreet's Jim Cramer Teach-In. I think we came to a general consensus that the passive nature of index investing, which covers a lot of the ETF space, has led to a reduction in overall volatility. At least that is the view from 10,000 feet; beneath the surface that we call broad headline news though, we agree that this can add to the choppiness that we know as sector rotation. Herd of cattle. Small gate.

As markets reacted last week, and then over-reacted to various earnings reports, we saw an attempt made earlier in the week to rotate out of the broader tech space (as well as the staples, and health care), and into discretionary names and financials. Funny thing happened toward the end of the week, though, as Amazon (AMZN) , Action Alerts PLUS charity portfolio name Alphabet (GOOGL) , Intel (INTC) and Microsoft (MSFT) all reported quarterly earnings that would make their shareholders very happy. Suddenly, the pendulum that is passive sector investing had swung the other way with a vengeance. The tech-laden Nasdaq Composite ran 2.2% on the session, and that was that.

There is another component to this volatility-suppression story that needs to be understood. The investor needs to understand the extent to which the free market for credit has been perverted by central bank behavior over several years. Yield curves have been distorted. Please understand this. I know you know it, but these are not the ramblings of a crazy Irish kid from Queens. (Yes, they are, but still, pay attention) This perversion of the pricing mechanism for credit obviously also extended itself to equity pricing, real estate, currency valuations and more.

As central banks attempt to normalize monetary conditions, it stands to reason that day-to-day headline volatility will also normalize. This is not necessarily something to fear, but must be understood. The problem is that the public will not understand that this process must be endured, and will almost certainly experience as a reality the very first time that the Treasury Department runs an under-subscribed auction for U.S. paper. Haven't thought of that as a concept in a while, have you? This reality will be delayed by demand for higher U.S. yields, but will be an eventual reality.

In the meantime, we are having a solid earnings season to this point. At this stage of the season, 76% of companies currently residing in the S&P 500 have beaten expectations for earnings per share, while earnings growth (we have not heard from the retailers, yet) is running just below 7%, versus expectations of less than 4%. This week will surely test this early success, as another 177 S&P 500 corporations step to the plate. Bear in mind that there is a great deal of benefit baked into these numbers that has been provided through weaker dollar valuations. That dollar has raised its ugly head of late, which makes the presidential nomination of our next Fed head all that more important later this week.

Oil; That Is, Black Gold

You've got to love Saudi Crown Prince Mohammed bin Salman -- that is, if you're long the oil space. On Saturday, in conclusion to a week that saw WTI crude prices test the $54 level, bin Salman let it be known that he favors the limitation of output extending beyond the expiration of the OPEC/Russia deal in March. Why does this matter? For one, bin Salman is next in line to the Saudi crown, and Russian President Vladimir Putin has already made public his preference for such an extension.

Remember, I have been telling you for quite some time that the $52 level was a gateway. A gateway to either the $54, or sub-$50 levels. Now chances are that we see some increased volatility regarding this space short-term, as tensions rise in northern Iraq as well as anything Persian Gulf related. That said, there should be pressure on the long-dated side of the futures market, making this a difficult level to tackle. Nobody should be surprised to see a re-test of those $52 levels as headline risk evolves. That said, should this gateway swing, prices could land between $57 and $58. Now, that, I believe could finally be the spot that finally allows the commodity to drag the energy sector along with it. BTW, natural gas still languishes below $3. We'll see.

Just how excited should we be getting over the passage of that budget resolution last week? Just how excited should we get when the House Ways and Means Committee reveals their tax reform package as expected later this week? As for equities, small-caps (due to their higher effective tax rates) and the transports (due to increased prospects for growth that we may already be seeing) would be obvious beneficiaries, as would many of the big techs that might be enticed to bring home a portion of their cash currently held overseas in order to avoid paying high U.S. tax rates.

Just for your information, the average effective tax rate for an S&P 500 company is currently about 28%; so, a drop in the basic corporate tax rate to 20% would even benefit many larger corporations. For those smaller companies that live in the Russell 2000, their effective tax rate is a lot closer to the advertised rate.

Tax reform is starting to get a mention in some earnings calls, but no firms that I know of have actually adjusted anything based on this. Still, it would be hard to argue that the recent gains made by both the Russell 2000 and the Dow Jones Transportation Index versus the S&P 500 are based on growth alone; more likely, in my opinion, on growth multiplied by expected growth. You saw last Wednesday's release for September durable goods orders, right? You understand the most important item within that report is core capital goods, correct? For years now, we have seen negative digits here, separated by spurts of minimal increases. What that means is that, other than payouts to shareholders, corporations were not investing in their businesses.

Now? Poof! Suddenly, a robust September result of 1.3% month-over-month growth that brought with it a revision to August that also brings that month's growth up to 1.3%. Year over year, September now can boast mighty 7.8% growth. After what we have been through, this is simply amazing. My point is that some folks, namely purchasing managers, are indeed starting to partially price in some kind of success on the legislative front. There is some belief across market participants that nothing is yet priced in, which I believe to be false. I will illustrate below. My thought? Successful tax reform keeps the trend intact. Failure provokes a medium-term change in the trend. Either result could produce a very short-term "sell the news" event.

Chart of the Day: Pricing in Tax Reform 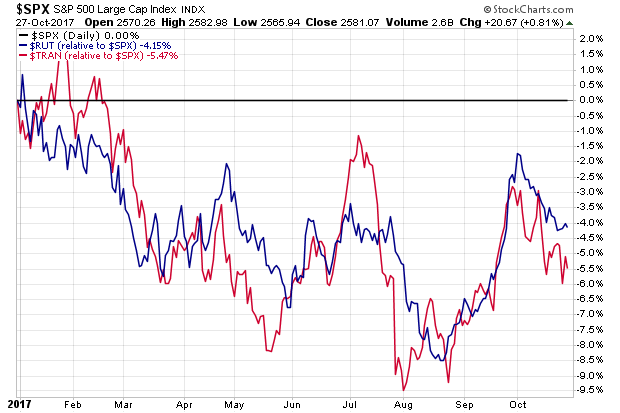 This second chart may come as something of a surprise to the casual eye, or maybe to someone who does something else for a living, but tries to have a hand in determining their own financial destination. This chart still uses the S&P 500 as a baseline, but only covers the last two months. 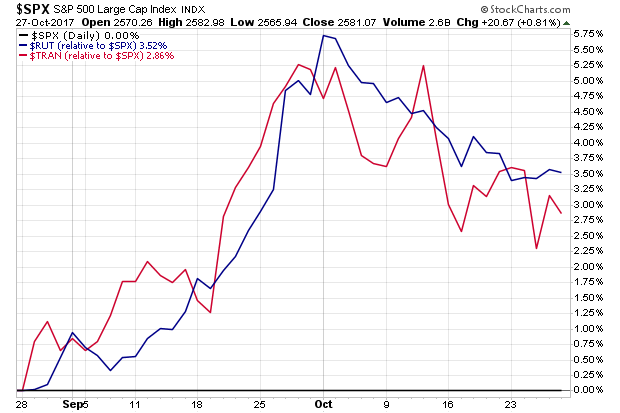 Well, as you can now see, both of these "lesser" indices are outperforming the broader market over this timeframe. You can even see the reaction a few weeks ago to the ongoing headline risk that has made tax reform seem more or less likely over time, as other political headlines appear to take priority at times.

Get an email alert each time I write an article for Real Money. Click the "+Follow" next to my byline to this article.
TAGS: Investing | U.S. Equity | Financial Services | Technology | Economic Data | Markets | Economy | How-to | E-Commerce | Risk Management | Stocks