Norway is the leading country in the world for electric car adoption. In September, 45% of new cars sold in Norway were pure battery-electric vehicles (BEVs). Plug-in hybrids accounted for an additional 15%, so a total of 60% of that market is plug-in cars.

That's way more than any other country, to put it mildly. In Norway, they know their EVs, and EV sales trends often get started there thanks to the educated consumer and availability of most of the newest and most competitive models. Automakers often put their first EV foot forward in Norway.

I have recently been tracking Norway's EV sales on a daily basis in order to see the impact of the market's newest market entrant, the Jaguar i-Pace. It's Tesla's (TSLA) first premium pure-electric long-range competition.

The table below has the sales numbers for Oct. 1-22 and Oct. 1-29, as well how much each of the models grew just over this last week. This gives you a sense of where the Norwegian electric car market is heading.

It is the tip of the spear, if you wish. What you see in Norway, has a good probability of replicating in many other countries in the weeks and months to come.

What happens in terms of sales trends in Norway is an important indicator for sales in many other countries, especially in Europe. Given that the Norwegian DMV is fully transparent, allowing for real-time registration monitoring, we have a great view into these trends on a daily or even hourly basis. As it stands right now, the Jaguar i-Pace is the relative sales success at the premium end of the EV market. 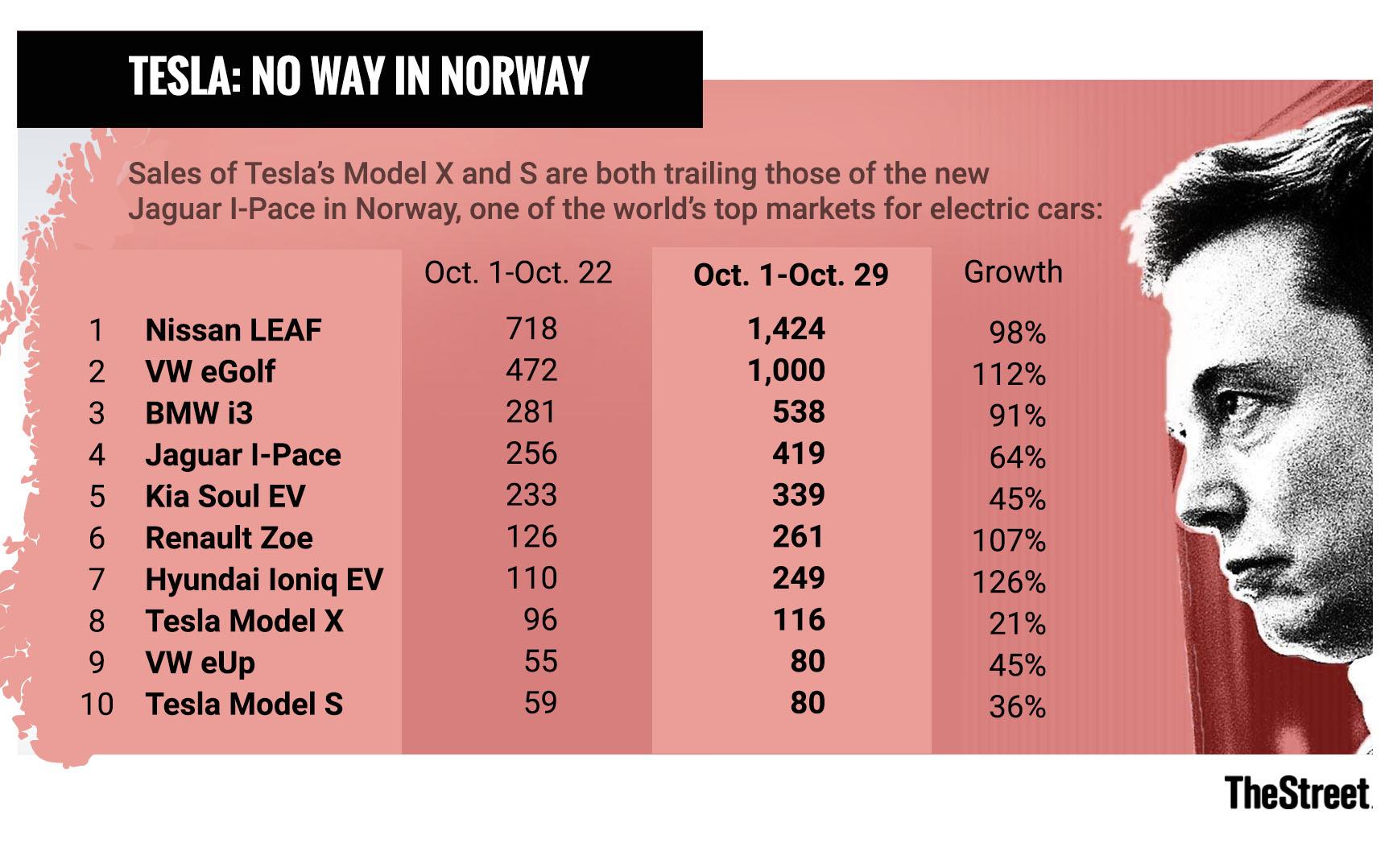 Source: https://elbilstatistikk.no/ I tend to take the daily numbers at or a little after 5 p.m. local Norwegian time

As you can see in the table above, Jaguar has become by far the best-selling premium EV in Norway, behind only the smaller and less expensive models from Nissan (NSANY) , Volkswagen (VLKAF) and BMW (BMWYY) . It has easily trounced both the Tesla Model X and S combined, outselling them by 113% thus far in October.

In the last week, the models that have grown the fastest on a percentage basis were from Hyundai (HYMTF) , Volkswagen and Renault. The slowest growers among the top-10 models were both from Tesla.

Jaguar is in the middle of the pack with a 64% growth rate this week. Still, it easily defended its third place, making it the best-selling premium EV by far, and is barely 100 units away from BMW for the month.

Those two objections are true, but they too have counter-arguments.

First, if the Norwegian customer has for the first time been given a high-end BEV alternative to the Model S and X, perhaps this December will be the last such good end-of-quarter success for those two Tesla models. Keep in mind that the equally competitive Audi eTron is also scheduled to arrive in Norway by the end of December.

Second, there is no doubt that if and when the Tesla Model 3 is approved for sale in Norway (and the rest of Europe, for that matter), it should do very well, barring any quality/service reputational damage that has become a frequent staple in the Norwegian press. However, by the time it arrives there, we should also have far higher volumes of the Kia Niro EV and Hyundai Kona EV available for delivery in Norway.

While deliveries of the Hyundai Kona EV and Kia Niro EV will make a little impact on 2018, they should arrive in much greater volume starting already in January 2019.

Then, by June 2019, the 230-mile range Nissan LEAF will also be available, making for a much more competitive version of the Norway's best-selling EV by far. On a combined basis, those Kia, Hyundai, Audi and Nissan models will serve to limit the success of the Tesla Model 3 to something meaningfully less than what happened in the U.S. during the third quarter of 2018.

Conclusion: Competition is real, and it's here -- in Norway.