International Business Machines Inc. (IBM) was reviewed earlier this month. At that time I wrote, "All three of our charts and their indicators are bearish. Analysts and investors may be anxious for a turnaround in Big Blue's fortunes but at this juncture it does not seem likely. A new low close below $138 could precipitate further declines. $124 is our Point and Figure price target." IBM reached our Point and Figure target on Friday and will overshoot it a little judging by Monday's pre-market activity in the wake of its planned, $34 billion acquisition of Red Hat Inc. (RHT) announced Monday morning. So what do the charts suggest now? Let's take an early check, knowing that the charts will not show the early price action.

In this daily bar chart of IBM, below, we can see how the price of IBM has slumped sharply this month. The slope of both moving averages -- 50-day and the longer 200-day -- are pointed down, so we know mathematically that the trend is down. The daily On-Balance-Volume (OBV) line is bearish and tells us that sellers of IBM have been more aggressive. The daily Moving Average Convergence Divergence (MACD) oscillator is bearish and has yet to start to narrow toward a cover-shorts buy signal.

In this weekly bar chart of IBM, below, we can see that prices will be testing the lows of early 2016. The $120 area also held way back in 2010 and there may be some investors attracted to IBM again in that price area. Prices are below the declining 40-week moving average line. The weekly OBV line is in a bearish decline and the MACD oscillator crossed to an outright sell signal earlier this month.

In this Point and Figure chart of IBM, below, we can see that prices have reached their downside price target. 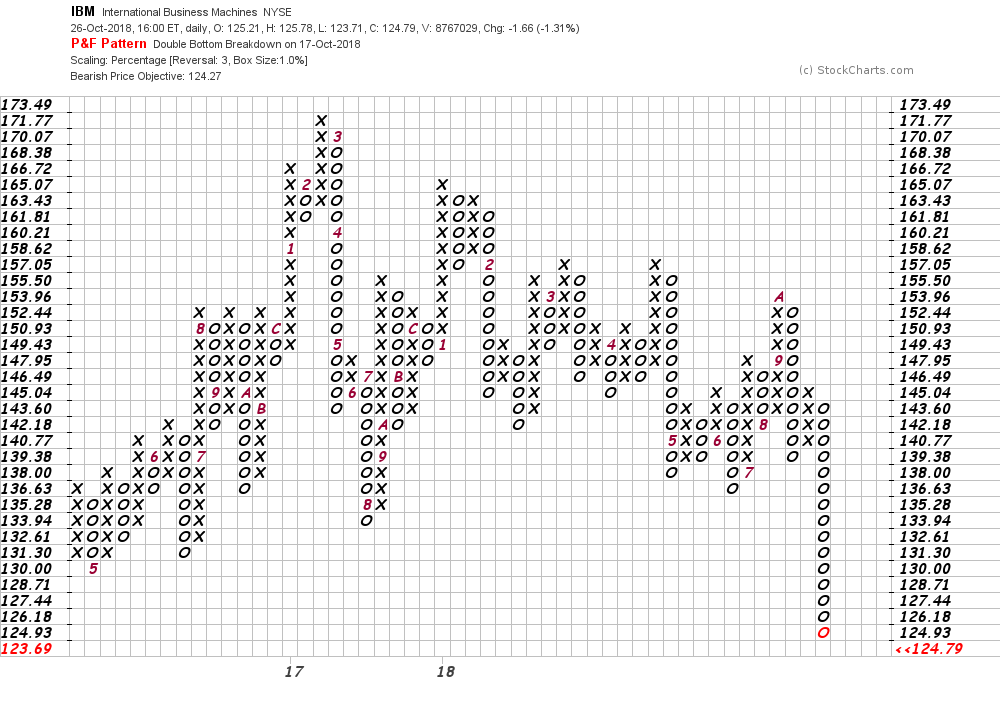 Bottom line strategy: IBM is very oversold, but that is not a reason in itself to go long. If short, however, I would probably cover. Aggressive traders need to see a candlestick reversal pattern and confirmation to probe the long side.

Get an email alert each time I write an article for Real Money. Click the "+Follow" next to my byline to this article.
TAGS: Risk Management | Mergers and Acquisitions | Investing | Stocks | Technology | How-to | U.S. Equity