I want to break down today's column into two separate pieces. I am going to start with the longer term and then we'll look at the shorter term.

Another longer-term reason has to do with the Russell 2000. When we look at the daily change between the spread of the 200- and 50-day moving average lines we see it is now back at levels not seen since the fall of 2008. In the short term that makes it grossly oversold (thus short term bullish). In the longer term, anything that gets that oversold takes a long time to repair itself. So even if it bounces (my assumption) there is going to be an awful lot of testing and retesting to come.

Which brings us to the W pattern. We haven't even gotten the first V rally yet and since we know that W patterns, where the second V is what often becomes the successful retest, would mean that even if we do get the rally I envision that could/should start around Election Day we would still need to come back down for a retest at a later date.

Now let's take a look at the shorter term. I expect we will be back to an oversold reading by midweek this week. My own Oscillator should make it there Wednesday. Nasdaq's Momentum Index makes it there between Tuesday and Thursday. For Nasdaq I walked it down 200 points for this coming week and it turns up anyway after Tuesday's close. The interesting thing is the indicator turns up from a higher low which would make it a positive divergence in momentum, the first we've seen during this decline.

The Hi-Lo Indicator is now at 4% for the NYSE and 6% for Nasdaq. I suppose they can go to zero but under 15% and it's oversold.

There was a minor increase in stocks making new lows on Friday on the NYSE. It was only by two issues so it's not terribly meaningful but it had been contracting for nearly two weeks. Nasdaq saw its first contraction in stocks making new lows Friday so that's the first positive sign we've seen from Nasdaq during the decline. We want to see fewer new lows because we want to see the selling dry up.

The Volume Indicator is now at 45%. It tagged 44% in November 2016 and tagged 41% in August 2015 and again in January 2016. Even during bear markets readings in the upper 30s or low 40s have produced rallies. Any selling this coming week should take this down to the low 40s.

Finally the 30-day moving average of the advance/decline line should get oversold just prior to the election, which is now only one week away.

Two things I would love to see in the coming week. The Investors Intelligence Bulls tumble well into the 40s. They currently reside at 50.5% which in my view is simply too high; heck they were in the low 40s this past spring.

I would also like to see the 10-day moving average of the put/call ratio roll over. I thought it would roll over a week ago and instead it has simply milled around. It needs to turn down. 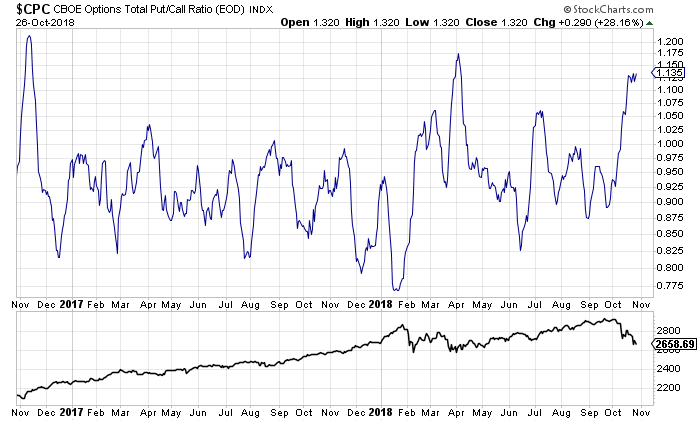 Finally, the Russell 2000 outperformed the S&P on Friday. It's too soon to say if that sticks but the Russell closed one percent higher than it Wednesday's close and it was the only major index to do so. There is long-term support in the 1,450 area.