The slump came amid investor worries that the company overpaid for Red Hat given the 63% premium paid for shares of the Raleigh, N.C.-based company. The high price is seen as curtailing spending efforts, cutting share buybacks, and has even drawn negative attention from credit rating agencies.

"This suggests to us the transaction will be dilutive for a while and that share repurchases will be curtailed in order to focus on debt reduction," Wells Fargo managing director Edward Caso wrote in his take on the deal.

He added that he sees S&P's downgrade of the company's credit rating this morning to "A" from "A+" along with its negative outlook as a concern.

The acquisition, if approved, will lead to a "substantial increase in leverage pro-forma the close of the Red Hat acquisition and represent a departure from IBM's historical acquisition philosophy of making small, tuck-in acquisitions that limit integration risk," Moody's Senior VP Richard Lane said in a statement.

He, much like his contemporaries at Standard and Poor's, issued a negative outlook for IBM's debt.

The most obvious rationale for the company to spend so extravagantly is its need to branch into cloud computing in order to diversify its business model, much of which is antiquated and "not coming back" according to MoffettNathanson senior analyst Lisa Ellis.

IBM's cloud business currently accounts for $19 billion of the company's revenue, about 25% of the company's overall revenue. The percentage has been steadily growing in recent years, offering some hope for a transition.

"IBM could potentially be a new sheriff in town," Keybanc Capital Markets senior analyst Arvind Ramnani wrote in his take on the deal. "With this elevated profile in the cloud landscape, IBM now offers a more compelling alternative to Amazon (AMZN) , Microsoft (MSFT) , and Alphabet (GOOGL) ."

He set a $140 per share fair value estimate for the company, adding that he expects IBM to integrate Red Hat relatively seamlessly into its overall business.

Jim Cramer's Action Alerts Plus Team was much more skeptical of the legacy companies ability to compete in cloud.

"IBM and Red Hat have been in partnership for 20 years, and while we believe that some synergies and combined offerings may help in marketing and scale, we are skeptical as to what the acquisition will do to make the combined offering of the two companies more enticing versus others in the space, namely AWS and Azure, or in comparison to what the two companies offered as standalones," the concluded.

Another key takeaway was the company's significant step into acquiring key talent in a current skills gap.

"Why did IBM acquire Red Hat?" LGTM, a data science division of software engineering analytics provider Semmle Inc. wrote in a statement. "Because RedHat developers are among the best Java and JavaScript developers, of course!"

A report prepared by Semmle data scientist Albert Ziegler noted that Red Hat is among the top three best firms of its kind in the world.

Given the skills gap present in technology, the large amount of code RedHat developers are capable of writing, and writing well, will serve to accelerate IBM's advances in ways it could not have prior to the acquisition.

Josh Coates, CEO of the education technology company Instructure (INST) , noted that the technology space is in desperate need of more skilled developers and that acquisition might be the quickest bandaid.

"I think the skills gap is very real," Coates explained. "It's really almost a crisis, companies are starving for talent and acquisitions are a really quick way to make that happen."

Still, questions persist as to whether IBM will be able to hang on to the developers it poaches from Red Hat or if the deal will only serve to fill the coffers of recruitment agencies eager to headhunt unhappy technologists.

The biggest ever software deal follows in the footsteps of many large tech companies swallowing talented workforces and expanding into sought-after verticals this year, specifically in cloud computing.

For example, Salesforce.com's (CRM) $6.5 billion buyout of MuleSoft, Microsoft's (MSFT) $7.5 billion grab of GitHub, and Twilio's (TWLO) $2 billion deal for SendGrid have highlighted the new normal of mega-acquisitions in 2018. 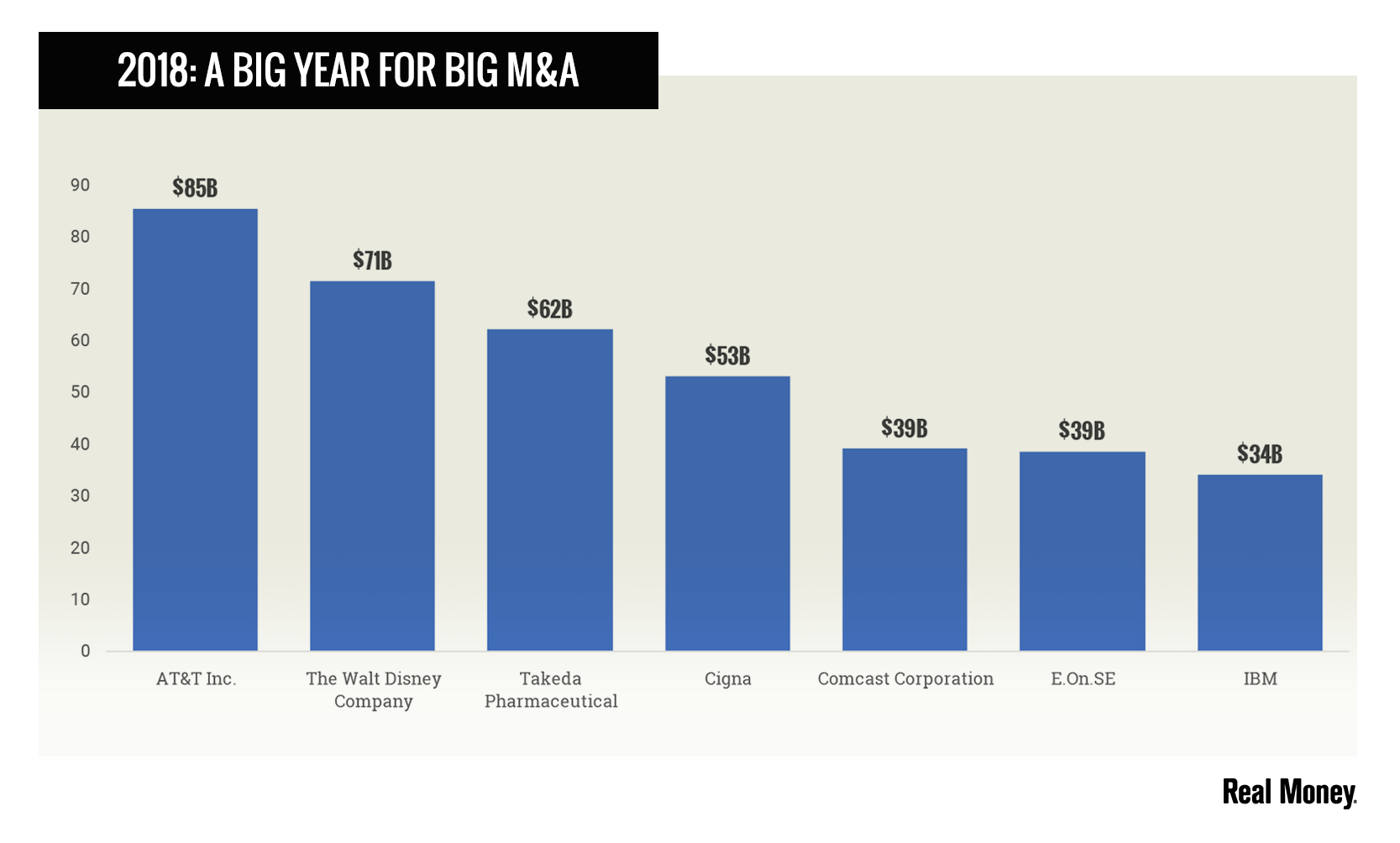 "The volume of M&A in software appears to be picking up, with over 70 transactions announced year-to-date including IBM/Red Hat," JPMorgan analyst Sterling Auty wrote in a note on Monday morning. "Interest rates are heading higher so we are ending one of the most lucrative financing phases in the last 20 years."

The trend in the industry clearly begs the question of who might be the next target.

Auty made a laundry list of targets he sees as attractive strategically, vertically, or valuation-wise for some of the big fish in technology and software to jump on.

A full breakdown of the 16 targets laid out by JPMorgan is available here.

IBM has been significantly oversold according to the Relative Strength Index, clocking in at 21, well below the oversold band of 30.

However, as the market smells desperation on the part of IBM, it might behoove investors to see some sign of concrete recovery before buying in on the blockbuster deal and the price slide.

"While we are not ready to call it too little too late for IBM just yet, we do believe the move to made out of necessity and a lack of choice," Jim Cramer's AAP team said. "As CNBC commentators have put it, the move feels a lot like a late fourth quarter, hail Mary pass, in an attempt to keep the two companies relevant in an increasingly competitive space."

For now, the "Hail Mary" pass seems to be falling incomplete.

As Momentum Slows, Some Small-Cap Pruning Is in Order

Many of the smaller stocks I favor have not reported earnings yet and I'm cutting them back.

Trust Your Gut (Experience) When Trading: What Mine Is Telling Me Now

The market hates lucky traders. Following your instincts is so you can sleep at night.